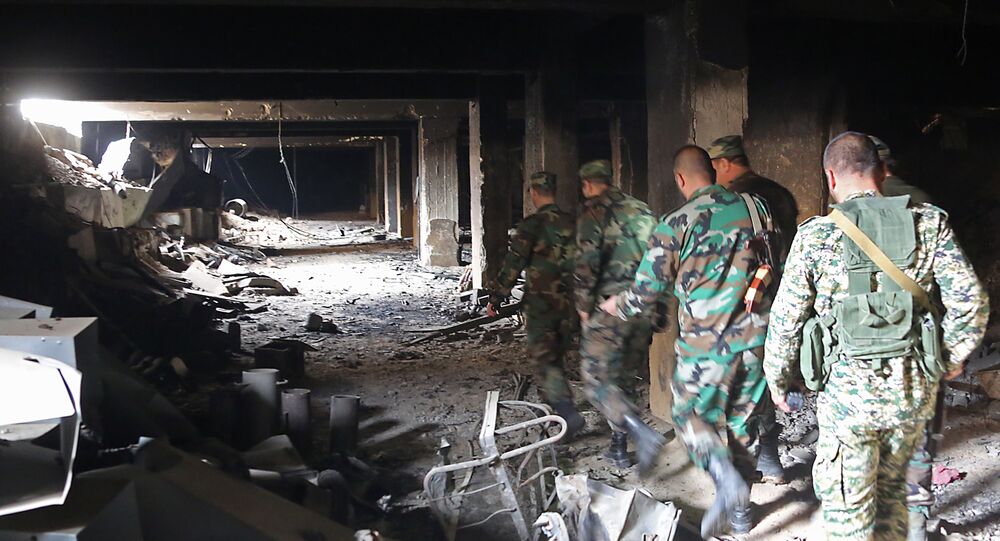 A number of British forces have been captured by the Syrian army during military operations in Eastern Ghouta, according to reports by local media.

According to a report by Al-Mayadeen news channel cited by Fars News, a number of British troops have been captured during the Syrian Arab Army's operations in Eastern Ghouta.

© AP Photo / Neil Munns
UK Submarines Sent Within Missile Range of Syria for Strikes - Report
They are believed to be a part of international military forces deployed in the region to launch a ground assault in Damascus in cooperation with the US. According to the report, the US and other NATO countries, Jordan and Israel planned to launch attacks from several fronts, but the plot failed as Syrian armed forces made a series of rapid advances in Eastern Ghouta in March. The plot allegedly involved massive airstrikes by US and Israeli planes that were supposed to pave the way for ground forces.

"After the plot was disclosed, the Syrian-Russian military commanders started operations in Eastern Ghouta to repel it," the sources cited by Al-Mayadeen and Fars said.

Since the plot failed due to rapid advances by the Syrian army, the US cancelled all operations planned for these foreign forces and ordered an immediate withdrawal from Eastern Ghouta through the eastern suburbs of Damascus, including Douma.

The US and Turkey sought to rescue foreign "militants and agents operating for Israel, Jordan and NATO," now trapped in Ghouta, and move them to Idlib, the source says.

The Turkish initiative to help with the evacuation of Nusra Front terrorists from Ghouta has reportedly been a coverup for "special foreign forces that were among the ranks of the Al-Qaeda-affiliated" Nusra front terror organization.

"Therefore, the US has ordered Jaysh al-Islam, Faylaq al-Rahman and other terrorist groups to allow the evacuation of civilians from Eastern Ghouta to army-held regions in a bid to provide the ground for these foreign agents to also leave Ghouta in disguise and enable the Turkish intelligence service to send them to specified regions in At-Tanf and northern Syria which are under the control of US troops," the source said.