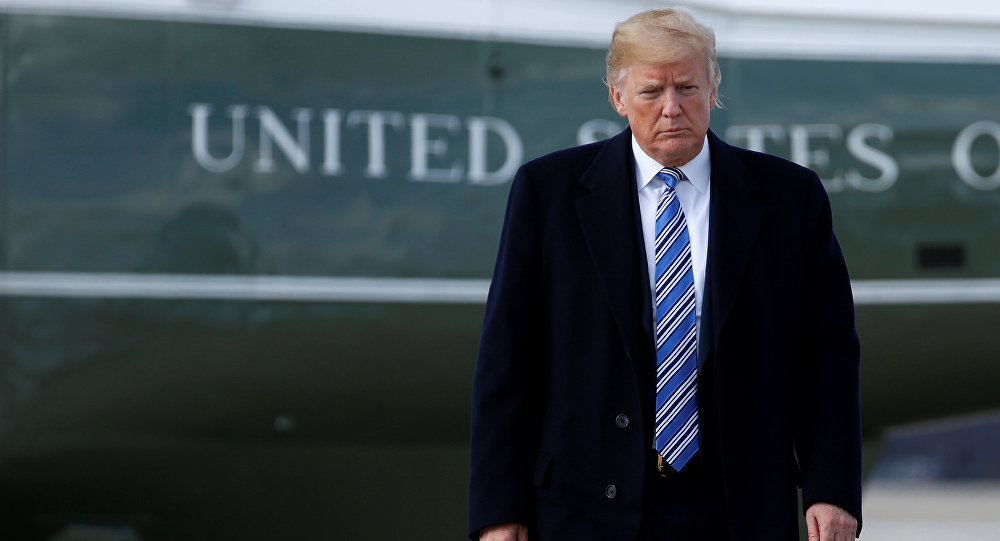 Attack, offer a way out and then... blame it on the on your opponents! At least that's how it went down for Donald Trump today when he decided to take to Twitter in his attempt to intimidate Moscow - only to face-off with the Russian Foreign Ministry's spokeswoman Maria Zakharova. Sputnik broke down the fiery exchange as it went down on the web.

Battle commenced in earnest when Trump took to Twitter in the morning — in keeping with his prior reliance on the social media platform for disseminating fiery rhetoric, the US president responded to suggestions that Russia would shoot down American missiles fired at Syria with threats, and an implied ultimatum, promising "nice, new and 'smart'" rockets would be "coming" for Bashar al-Assad. He dubbed the Syrian leader a "Gas Killing Animal".

Zakharova was not going to take the President's incendiary grandstanding lying down. On Facebook, she viciously and succinctly attacked the foundations of Trump's threats — and the US case for attacking Syria.

"US President Donald Trump has claimed Russia needs to be prepared to shoot down missiles launched on Syria. He posted that on his Twitter account this Wednesday. Smart missiles should fly towards terrorists, not the legitimate government, which has been fighting international terror on its territory for several years now. Oh and incidentally, have the OPCW inspectors been warned "smart" rockets would destroy any evidence of chemical use on ground? Or is this exactly the point — to quickly cover up all traces of this provocation by a smart missile strike so that the international experts would have nothing. to search for as proof?" Zakharova wrote.

It's unknown whether the president was apprised of Zakharova's riposte, although his subsequent Twitter salvo was slightly more measured. While apportioning blame to Russia for the parlous state of Washington's relations with Moscow — which Trump perhaps bizarrely claimed were "worse now" than even during the Cold War — he struck an almost dovish, conciliatory tone, calling for "all nations to work together," and suggesting "the arms race" could be stopped.

​Whether Trump's slightly more friendly approach was a "bait" or not, Zakharova certainly wouldn't bite. Her next Facebook posting took an altogether more sardonic tint — although her underlying point was a very serious one. The US is after all the owner of the world's largest stockpile of chemical weapons (over 2,500 metric tons of the most dangerous weaponized toxic substances), while Russia's arsenal was completely destroyed in 2017 under OPCW verification.

"Trump's offered Russia to stop the arms race. Great idea! Here's a proposal — start that by destroying all chemical weapons stock. The American one," Zakharova wrote.

The US President is renowned for being extremely fickle, and changing his views, stances and policies radically in the blink of an eye — and his next tweet seemingly completely contradicted his previous one. Rather than stating there was "no reason" for US/Russia relations to be so woeful, and implying Russia was the country at fault in the relationship, he attributed current hostility into Special Counsel Robert Mueller's probe into alleged collusion between the President's campaign team and the Kremlin during the 2016 election.