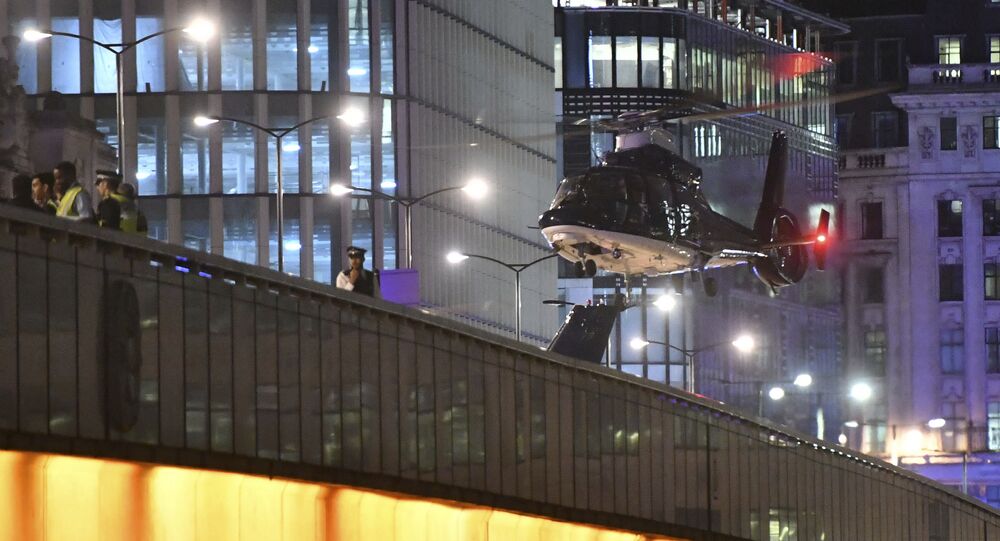 It has been suggested UK intelligence services just stood by and watched as the men who carried out the 2017 London Bridge terror attack loaded their van and set off en route to the atrocity. Intelligence services research Tom Secker has told Sputnik the exposure shouldn’t shock.

An official report by David Anderson QC, the UK government's former independent reviewer of terrorism legislation, has revealed Khuram Butt, ringleader of the June 3 2017 London Bridge terrorist attack, was under surveillance by MI5 and MI6 agents and Scotland Yard, and still the subject of "a live investigation" on the night of the attack.

Butt, former disciple of jailed fundamentalist preacher Anjem Choudary, had been on MI5's radar since mid-2015 as a "subject of interest" — it was thought likely he was planning an attack, and up to 30 intelligence staff and undercover police monitored his movements him round the clock.

© REUTERS / Metropolitan Police
Italian national Youssef Zaghba, 22, identified by Italian and British law enforcement bodies as the third man shot dead by police officers during the attack on London Bridge and Borough Market is seen on right with the other two men named, Khuram Shazad Butt on left and Rachid Redouane, in an undated image handed out by the Metropolitan Police, June 6, 2017,
While the surveillance operation was eventually downgraded, due to Butt being assessed as more likely to travel to Syria to fight with Daesh, he and accomplices Rachid Redouane and Youssef Zaghba were watched by authorities loading a van outside his flat in Barking, East London, before the June 2017 atrocity — and intelligence officers didn't inform the police.

A mere two hours later, the vehicle was mowing down pedestrians on London Bridge, killing two and injuring scores more, before the jihadi trio exited and embarked on a stabbing spree, attacking Friday night revellers at nearby pubs and restaurants, killing six. They were only stopped when armed police arrived and shot them dead, eight minutes after the attack commenced.

While an unsettling disclosure, intelligence services researcher Tom Secker says it cannot be deemed shocking, as intense intelligence agency surveillance of suspects prior to attacks, and missed opportunities to prevent such events, are a recurring theme of major terrorist incidents in Western countries.

"If Butt was considered a low-level risk, why was he still under active surveillance right up until he launched an attack in London? Assuming this story is true, MI5 either deliberately let this attack happen — in which case they're guilty of facilitating terrorism — or are so incompetent this has to constitute gross criminal negligence. If you can have a guy under close surveillance and he can still carry out a terrorist attack then what use are MI5?" Mr. Secker told Sputnik.

© AP Photo / Alastair Grant
Forensic police investigate an area in the London Bridge area of London, Monday, June 5, 2017.
Other major of examples of this trend cited by Mr. Secker include the 1998 Omagh bombing — which seemingly "was allowed to go forward to protect the identity of an FBI informant within the gang" — and the 1974 Birmingham pub bombings, which resulted in the wrongful convictions of the Birmingham Six — "probably allowed to happen to protect an MI5 spy in the group."

"With the 7/7 bombings, the 'intelligence failures' were too numerous to mention, and went on for years. During Operation Downtempo in early 2005 — an attempt to identify two men who'd been to a training camp in Pakistan run by FBI informant Mohammed Junaid Babar — an MI5 desk officer intuitively guessed the two men would be the same guys who turned up during Operation Crevice in 2003-4, but no one followed it up. The officer was right — the two men were Sidique Khan and Shehzad Tanweer, two of the supposed bombers," Mr. Secker continued.

Moreover, the revelations about the monitoring of Butt follow an official report exposing how UK security services also missed opportunities to prevent the suicide bombing at Manchester Arena in May that year, when a homemade bomb detonated by Islamist Salman Abedi killed 23 people and injured over 500.

Reports indicate MI5 had been tipped off about Abedi, and he was similarly placed on the "subjects of interest" list. The intelligence agency scheduled a meeting to discuss whether Abedi "merited further examination" a mere week after the attack took place.

The report concluded on at least five separate occasions prior to the attack, intelligence was received by MI5 to the effect Abedi harbored extremist views and was willing and able to act upon them. Authorities were also aware Abedi's father was linked to LIFG, a well-known militant Islamist group in Libya proscribed in Britain. Abedi also had links to several British-based jihadis with Daesh connections.

© REUTERS / Police Handout
Salman Abedi, the bomber behind the Manchester suicide bombing, is seen in this image taken from CCTV on the night he committed the attack in this handout photo released to Reuters on May 27, 2017.
The official investigation concluded it was "conceivable the Manchester attack might have been averted had the cards fallen differently."

The only question is why this phenomenon keeps recurring — Mr. Secker suggests it's because "no one holds the security services to account."

"The mainstream media shies away from actually going through documents and pointing out where MI5's story doesn't make sense. In the years following 7/7 MI5 told at least four distinct stories about what they knew and when, and even their final story is contradicted numerous times by their own documents. To date, not a single major journalist has dared to point this out," he told Sputnik.

Moreover, he notes the UK government is refusing to hold itself to account — Anderson's official report is a "whitewash" despite its exposures.

© REUTERS / Special Deterrence Force/Libyan Interior Ministry
Hashem Abedi, the brother of Manchester attack bomber, is seen in this handout photo provided by Libyan Special Deterrence Force on May 25, 2017
"Normally the Intelligence and Security Committee who would review this, but for most of 2017 they weren't active due to a problem with MI5 vetting of the proposed new members. As a result Theresa May's administration got a very government-friendly lawyer to conduct a review which his own report admits is not independent, which finds the security services had done nothing wrong despite making no end of bad decisions in the run up to the Manchester bombing and the London Bridge attack," Mr. Secker concluded.

The views and opinions expressed by Tom Secker are those of the contributor and do not necessarily reflect those of Sputnik.