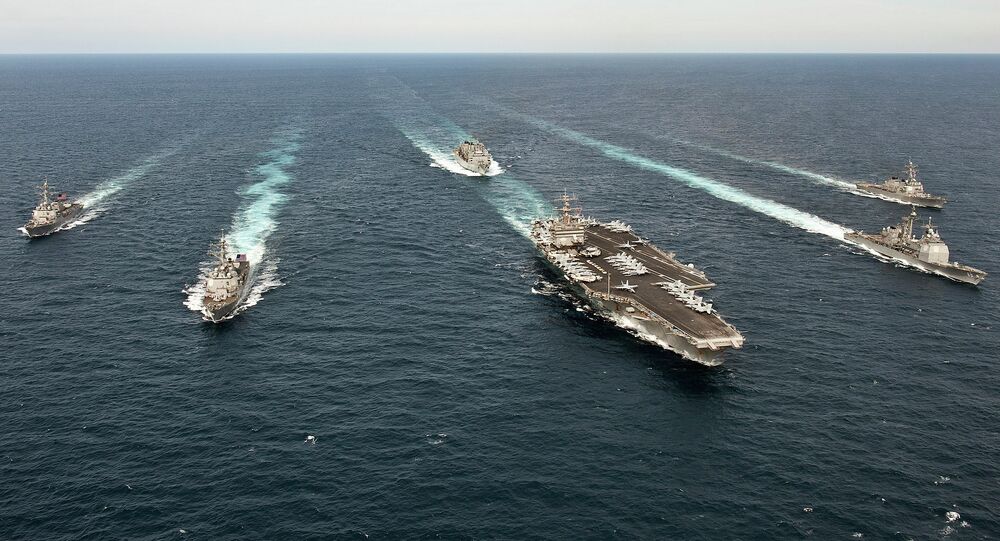 Chinese military experts believe the US is using North Korea as a cover to deploy more ships to curb Beijing’s military aspirations in the Pacific.

The US likely plans to deploy some four to six aircraft combat groups to the Pacific region under the pretext of countering the growing North Korean threat following the recent nuclear test, the South China Morning Post reported.

"We will continue to assure that we meet all of our missions here in the Asia-Pacific area. It could be something coming forward from Third Fleet or something like that to meet those requirements," said Chief of US Naval Operations Admiral John Richardson  on Tuesday.

© AP Photo / Victoria Jones/PA
Britain's New Aircraft Carrier Reportedly Springs a Leak Two Weeks After Launch
He did not elaborate when or how many ships will be deployed.

However, as the Chinese news outlet points out, Chinese military experts have a different point of view on the Pentagon's incentive.

According to Song Zhongping, a military commentator for Hong Kong's Phoenix Television, the move might target Chinese military presence in the region instead.

"The Chinese navy and Air Force will face unprecedented challenges if the US reinforces its military deployment in the western Pacific, because it's likely the Pentagon would deploy four to six aircraft carrier battle groups to the region," he said.

He estimated that if the Pentagon actually intends to conduct a military operation against North Korea, it will need four to six carrier groups in the area, while the US at the moment only has three.

Song's views are also shared by Beijing-based naval expert Li Jie, who agrees that the US might actually be targeting China, as the recently published US national security strategy singles out Russia and China as "revisionist powers."

"The US feels under pressure watching the PLA Navy and Air Force growing so rapidly," he told SCMP.

© AP Photo / US Navy/Anna Van Nuys
US Carrier Theodore Roosevelt Launches First Sorties in Persian Gulf Deployment
He explained that, under normal circumstances, the US kept one carrier group in the region, but had to increase its military presence in response to the growing Chinese military threat.

"Trump's administration realized that its current military deployment… is far from enough to cope with the increased security challenges in the region," Li said.

He also pointed out that Washington's move is not unexpected, as China will soon have two carrier battle groups of its own and expects the US to react accordingly.

According to the military analysts, the latest North Korean missile has a range of 13,000 km which puts the whole US mainland within reach of Pyongyang's nuclear arsenal.