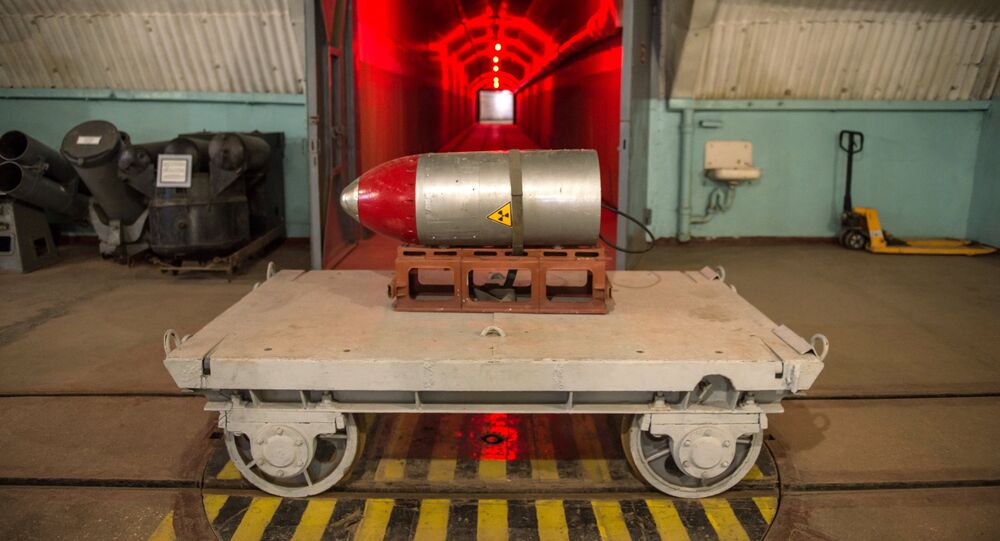 This week marks the 60th anniversary of the successful test of the T-5, the USSR's first submarine-launched nuclear torpedo. Sputnik looks back at the history of Soviet and Russian nuclear torpedo designs, and what drove naval planners to develop this deadly underwater weapon.

On October 10, 1957, the S-144, a Soviet Whiskey-class diesel-electric submarine, fired a nuclear-armed torpedo at a mock fleet near the Novaya Zemlya archipelago in the northern USSR. Detonating 35 meters below the surface, the 10 kiloton explosion destroyed two decommissioned destroyers, two subs and two minesweepers.

© CC0
Secret CIA Docs Reveal What Worried US Intel Most About Soviet Naval Capabilities
Soviet engineers began work on nuclear-armed torpedoes soon after the country had conducted its first successful atomic bomb test in 1949. The military's logic was that while long-range bombers and missiles were seen as key elements of the country's fledgling nuclear deterrent, the former remained vulnerable to air defenses, while the latter were only entering the early stages of development.

"Submarines were another matter," military observer Andrei Stanavov wrote in his piece for RIA Novosti. "They performed well during the Second World War, were capable of stealthily closing in on enemy shores, and inflicting a powerful and devastating blow to enemy ports and infrastructure." The USSR's Navy also had the benefit of having amassed a large number of experienced submarine commanders during WWII.

The Soviets' first foray into creating a nuclear-armed torpedo was the T-15, development of which started in 1951. Designed to be carried by Project 627 'Kit' ('Whale) subs, the USSR's first nuclear-powered attack subs, the massive, 1,550 mm caliber T-15 was over 20 meters long and weighed 40 tons. In the event of war, the T-15 would carry out attacks on US coastal facilities, seaports, naval bases and coastal cities.

Work on the T-15 began almost parallel to testing of the world's first hydrogen bomb – the RDS-6s (which US intelligence nicknamed the 'Joe 4'), which was successfully tested in August 1953.  Developers presented their design to the Navy two years later.

The fleet was less than thrilled, according to Stanavov: "The massive torpedo launcher tube took up one-fifth of the space of the entire sub, effectively turning it into a one-shot weapon. Furthermore, there were justifiable questions about the torpedo's range and speed, leaving much to be desired."

As a result, engineers focused their efforts on the construction of a more modest weapon – the 533mm caliber T-5 torpedo, equipped with the RDS-9 tactical nuke. Their size allowed the weapons to be carried by ordinary Soviet subs.

The T-5 was first successfully tested in September 1955 at Novaya Zemlya using a 3 kiloton warhead. That test was not carried out directly from a submarine, but rather using a minesweeper, which lowered the torpedo into the water, and exploded it from a depth of 12 meters.

© AFP 2021 / KIRILL KUDRYAVTSEV
Tired of Fake News? Washington Post Publishes Fake History of Soviet Union
The T-5 was handed over to the Navy in 1958, a year after its second successful October 1957 test. The weapon would go on to serve as the USSR's only nuclear torpedo until the 1960 appearance of 'Autonomous Special Combat Warheads' (ASCW), which allowed for nuclear rounds with a capacity of up to 20 kilotons to be packed into ordinary 533mm torpedoes.

Some years later, after the testing of the RDS-220 Tsar Bomba 57 megaton hydrogen bomb in October 1961, nuclear physicist Andrei Sakharov voiced the idea of creating an even more powerful, 100 megaton device, capable of being deployed in a submarine torpedo.

"After the testing of [the Tsar Bomba] I was concerned by the fact that there was no good carrier system for it," Sakharov later wrote in his memoirs. "Bombers don't count; they can be easily shot down. And so in the military sense, our work was for nothing. I decided that a large torpedo launched from a submarine would be an effective carrier. I envisioned the creation of a direct flow nuclear jet engine for it. The targets for the weapon would be enemy ports, launched from a distance of several hundred kilometers."

The sub-launched surface-skimming torpedo idea proposed by the academic was never realized in his own time, and would lay dormant, and forgotten, for half a century. In the meantime, the US developed its own tactical nuclear torpedoes, including the Mark 45 and Mark 48.

In the 60s and 70s, as the superpowers' technical capabilities improved and the USSR reached nuclear parity with the USA, the concept of nuclear torpedo-based was gradually phased out and replaced by ICBMs and more and more advanced missiles launched from nuclear subs and bombers.

© AFP 2021
Going Underground: What Russian Doomsday Bunkers Look Like (PHOTOS)
The concept of nuclear torpedoes as a nuclear delivery system reemerged in late 2015, however, after a Russian camera operator accidentally snapped images of 'Status-6', a sub-launched nuclear drone, during a meeting between military officials and the Russian president in November 2015. Like Sakharov's device, this weapon has an unconfirmed power rating of 100 megatons, enabling it to create artificial 500m tall tsunami waves along enemy coasts.
© Photo : Youtube / ЮрБас
Image of Status-6 plans accidentally leaked on Russian national television in late 2015.

The weapon has a suspected range of 10,000 km, a maximum depth of 1,000 m, and a top speed of up to 100 knots. Western media reports also speculate that the weapon is armed with cobalt-60, and that following detonation would contaminate broad swathes of enemy coast lines.

It is rumored that Status-6 system will be carried on specially-equipped Project 949 Granit and Project 09851 Khabarovsk submarines fitted with special docking nodules on their underside. Late last year, the Pentagon confirmed that the Status-6 project was real, and that it had undergone tests in November 2016 from aboard a Sarov-class sub.