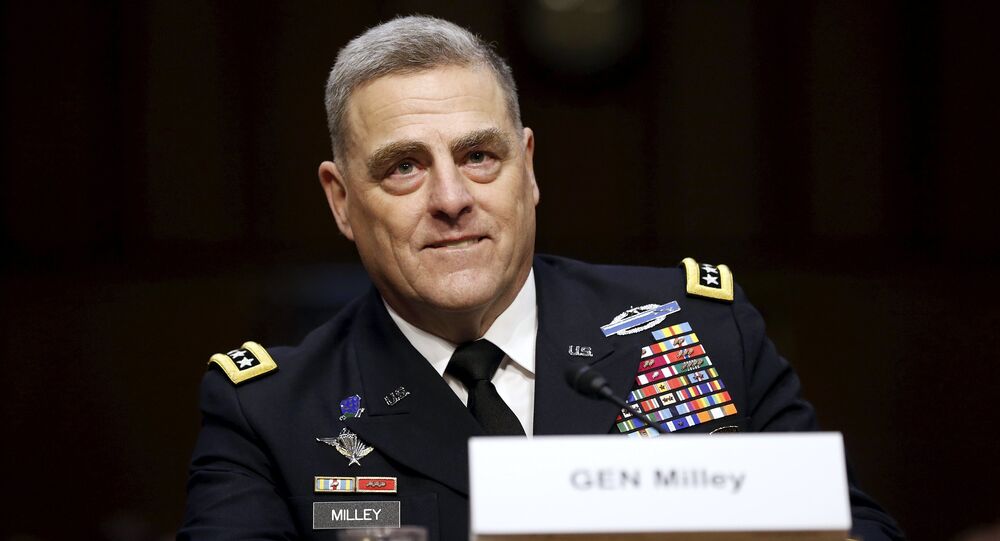 The US Army abruptly announced that it does not want to procure a decade-old WIN-T tactical network, less than one month before the US Congress is set to approve the budget for the 2018 fiscal year.

The Army suddenly informed Congress Wednesday that it doesn't want the 10-year-old tactical network known as WIN-T (Increment 2), and asked for the money designated for the network's procurement to be redistributed toward other purchases.

"After almost a year of careful review… we have come to the conclusion that the network we have is not the network that we need to fight and win against a peer threat in a congested or contested environment," Lt. Gen. Bruce Crawford, the Army's chief information officer, said.

© Sputnik / Mihail Mokrushin
Russia-Led CIS Integrated Air Defense Network May Be Expanded If Necessary - MoD
Testifying before the House Armed Services Air and Land subcommittee on September 27, Crawford informed the lawmakers that the army has come to the conclusion that WIN-T is way too vulnerable to hacking and jamming, its parts present too big a target for enemy artillery, and it takes far too long to get its equipment set up and running.

The surprising conclusion is a result of a one-year review of various tactical networks — not just WIN-T — ordered by Army Chief of Staff Gen. Mark Milley. According to Breaking Defense, Milley believes that while WIN-T works okay in the low-tech "static" battlefield of Iraq and Afghanistan, for which it was initially developed, the system will become a liability in case of all-out war with China or Russia.

Milley said WIN-T is far too susceptible to jamming, and the fact that WIN-T takes about 40-50 hours — on average — to get set up and running, doesn't work in the system's favor. That's two days, after all. Crawford revealed the speed issues in his testimony before the lawmakers.

"That's not exactly the speedy, mobile, adaptable system you'd need on a modern battlefield against, say, the Russians, who can spot a target with drones and have artillery rockets inbound in minutes," Breaking Defense report reads.

Testifying before lawmakers, Crawford said that the US Armed Forces are impeded by bloated and lengthy procurement operations that can take years — decades at worst — to buy new technologies. Because of that, the US struggles to keep up with its adversaries in terms of technological advancement.

"We've also seen a commercial innovation explosion and exponential growth in technological advances that accelerated at a rate at which our standard acquisition processes could not keep pace," he said, according to DodBuzz. "Neither current nor future adversaries are inhibited by the same processes, allowing them to better exploit new technology to their advantage."

As Crawford announced the Army's surprising decision, he asked the lawmakers to reshuffle the $544 million that was assigned for WIN-T's procurement for 2018. With FY 2018 starting in October, it's little wonder lawmakers were extremely displeased by the development.

"Just five months ago, you requested over $400 million in fiscal year 2018 for the WIN-T program, and indicated that WIN-T Increment 2 was the foundation of your network modernization strategy and mobile mission command," subcommittee head Mike Turner (R-Ohio) fumed. "Now you are asking us to realign almost half a billion dollars from existing programs with only limited details as to what your long-term plan is for the network."

According to DodBuzz, Crawford essentially failed to provide the panel with a plan of what the US Army is going to procure instead of the ditched program. Crawford mentioned that a system called Joint Battle Command Platform might serve as a replacement to WIN-T, but it is only expected to enter service by 2022.

© Sputnik / Sergey Pivovarov
Can You Hear Me Now? Russia's Syrian Satellite Communication Network Helps Prevent Clashes With US
WIN-T emerged as Joint Network Node (JNN) in the first decade of the 21st century, when the US plunged into numerous invasions that we now know as the War on Terror — mostly in Iraq and Afghanistan. After a restructuring in 2007, the program has been divided into four increments. So far, the US Army still relies mostly on Increment 1 technology even though Increment 2 underwent tests back in 2012. Increments 3 and 4 are nowhere to be seen.

The program has already cost the US $6 billion. While lawmakers appropriately pointed out that money will be "squandered," since the Army wants to ditch Increment 2, Crawford argued that the US Army will still deploy "capabilities and elements" of Increment 2.

Why would the Army ask to reshuffle half a billion bucks? According to Breaking Defense, the Army plants to apply $413.8 million "to fix the network's most pressing interoperability and security concerns", and the remaining $131.1 million to "adapt and buy" better systems.

The problem is that the Army, as mentioned above, still does not know what the "better systems" are.

So, apparently, the US Army needs money to plug holes in its decade-old system so badly it decided not to buy the newer version of the system without having a replacement system anywhere in sight.