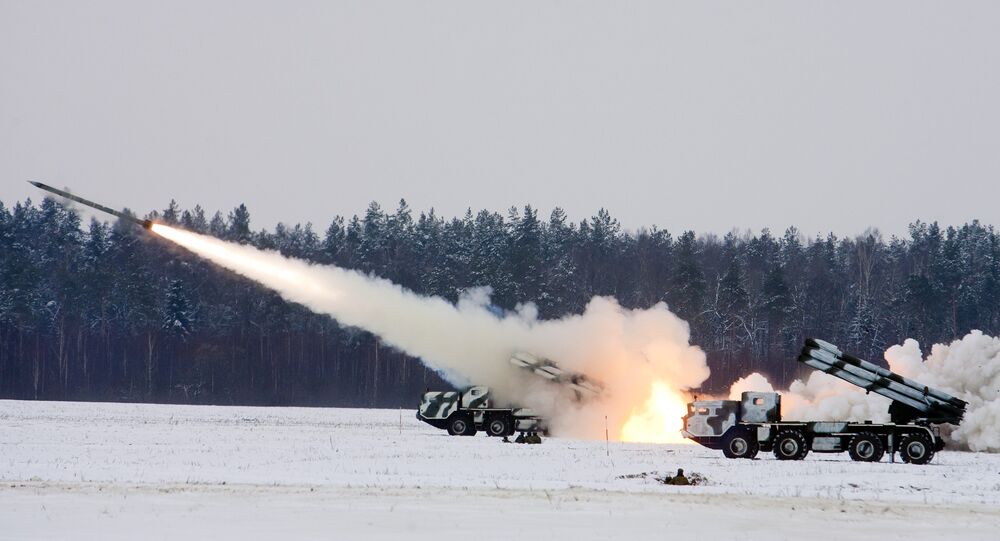 Russia's Defense Ministry has ordered its first batch of Koalitsiya-SV self-propelled guns. Military observer Andrei Kotz decided this was a perfect opportunity to consider some of the most powerful artillery systems already in use by the Russian Armed Forces.

The military will receive its first batch of Koalitsiya-SVs starting in 2020. With a 16 round-per-minute firing, GLONASS-guided 152.4-mm shells, and a range of up to 70 km, the Koalitsiya-SV will replace the Msta 152.4-mm self-propelled howitzer, an impressive system in its own right.

RIA Novosti military observer Andrei Kotz, who some readers may already be familiar with for his 'top five' lists, decided to create a new one, this one about the top five most powerful artillery systems in use by the Russian Armed Forces.

The first artillery system on Kotz' list is the Pion ('Peony'), NATO reporting name M-1975, a powerful, large caliber self-propelled artillery piece developed during the Cold War. In the 70s and 80s, both the USSR and the USA were looking for an effective way to strike large concentrations of enemy troops at a relatively short distance using low-yield tactical nuclear weapons.

"In our country, the weapon that could achieve this was the 203-mm 2S7 Pion self-propelled gun, and its later modification, the 2S7M Malka," Kotz wrote.

Alongside its ability to fire nuclear rounds, engineers would also eventually create powerful non-nuclear munitions for them, the observer noted. "For example, the 110 kg ZFO35 high-explosive fragmentation projectile can hit enemy targets at distances up to 50 km. In other words, in terms of combat capabilities, this self-propelled gun comes very close to the main guns of a World War II-era battleship."

"However, these systems' power and range are not only advantages, but to some extent disadvantages," the journalist admitted. "In Russia, one can count on one hand the number of firing ranges suitable for firing from these guns at medium or maximum range. In addition, the ammunition stock for these self-propelled guns is quite small – four rounds for the Pion and eight for the Malka."

"Nevertheless, over 300 of these self-propelled guns are still stored in the arsenals of the Armed Forces."

The 2S4 Tyulpan ('Tulip') self-propelled mortar, which NATO also designated the M-1975, first entered service with the Soviet military back in the 70s, but according to Kotz, still packs a wallop powerful enough to prevent it from being retired.

"The Tyulpan's main trump card is its broad range of destructive 240-mm ammunition, including high-explosive, incendiary, cassette and guided rounds. In the Soviet era, these guns could even fire two kiloton neutron and nuclear rounds. The mortar 'throws' its rounds toward the target," its design "allowing it to destroy enemy targets hidden in trenches and fortifications. Furthermore, it can be fired from a closed position, making it much more difficult to detect."

The Tyulpan received its baptism by fire in the Soviet-Afghan War. "Its high mobility allowed it to move along rough terrain on par with other armored vehicles, while its powerful gun allowed it to destroy targets on the opposite side of mountain slopes, in gorges and other hide-outs. Its high-explosive 240-mm rounds would effectively destroy enemy firing points among boulders, caves, and fortresses."

The 2S31 Vena ('Vein') 120-mm self-propelled mortar system is significantly newer than the other systems in this list, with deliveries into the Russian army starting only 2010. Kotz recalled that this system was developed after the war in Afghanistan, where the S29 Nona (Russian acronym for 'Newest Ordnance of Ground Artillery') light-weight air-droppable 120-mm system used by the Airborne Troops proved itself valuable against the Mujahedeen.

After this experience, the Ministry of Defense decided that a similar weapon was needed by the Ground Forces, this time based on a BMP-3 APC chassis, and the Vena was born.

Apart from the chassis, the other key difference two systems is the Vena's high rate of automation.

Kotz explained: "Each system is equipped with a gun-computer system providing for the sending and receipt of firing data. The information is displayed on a monitor by the vehicle's commander. The onboard computer is capable of simultaneously storing information on about 30 targets. The commander simply needs to choose the target; from there the system automatically aims the gun. In the event of a sudden appearance of a new target, the Vena is ready to fire its high-explosive projectile just 20 seconds after receiving this information."

The combined gun howitzer and mortar system is capable of firing any kind of 120-mm rounds, regardless of country of origin, making it an attractive weapon for export.

Saving the most formidable for last, Kotz described the BM-30 Smerch ('Whirlwind') as the most powerful rocket artillery system in the world. First introduced in 1987, "the system, with one volley, is capable of raining 12 300-mm 250 kg cluster, fragmentation/high-explosive or thermobaric warheads down on the enemy's head."

"The lethal footprint of a Smerch burst is about 70 hectares, and its firing range varies from 20 and 90 km. According to experts, the volleys of six Smerch units launching  simultaneously is comparable in destructive power to that from a tactical nuclear explosion."

Today, the original Smerch artillery systems are being complemented by the more advanced Smerch-S. Kotz noted that these systems "provide the possibility for autonomous trajectory correction during flight, achieved through the use of gas-dynamic control devices receiving signals from s control system. Simply put, this weapon, created to defeat large area targets, has become highly accurate, and can effectively engage in pinpoint targeting."