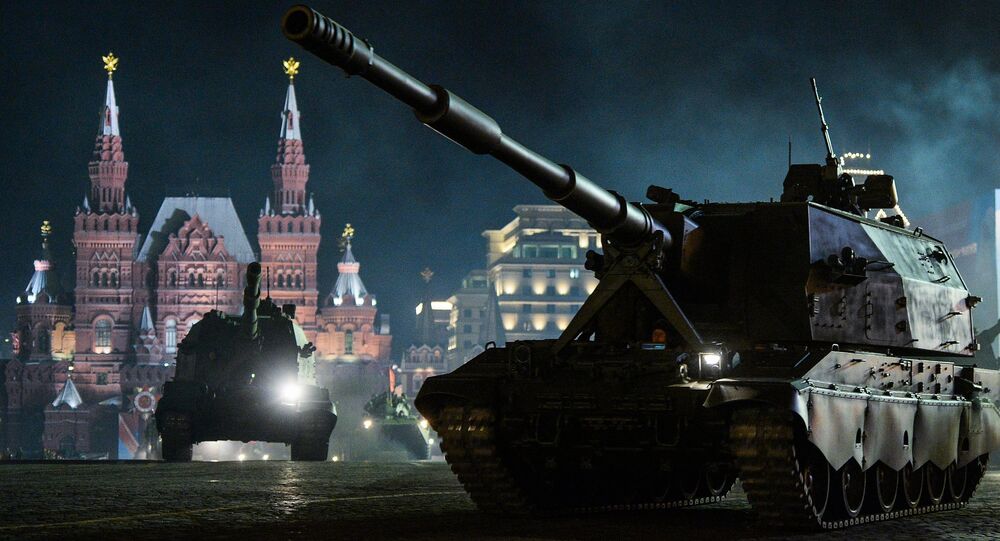 Out of Sight: Russia's New Self-Propelled Howitzer Leaves the West Behind

The first batch of state-of-the-art Koalitsiya-SV self-propelled guns will be supplied to the Russian Armed Forces beginning in 2020. The system is undergoing field tests now, but it is already clear that it leaves its best Western counterparts far behind, RIA contributor Andrei Kots wrote.

First seen in public during rehearsals for the 2015 Victory Day parade in Moscow the Koalitsiya-SV is built around an auto-loaded 152 mm howitzer capable of firing up to 16 rounds a minute, twice as much as any other modern main battle tank.

Targeting is done via satellite navigation or a laser target indicator.

Sputnik
Russian Brigades to Receive Koalitsiya-SV Self-Propelled Gun Soon - Missile Troops
The Koalitsiya-SV is a highly robotized system, with a high degree of automation. It features a unified command-and-control system that can automatically select the appropriate shell type for a specific task and the amount of charge required.

It has a firing range of 70 kilometers (43 miles), an absolute record no Western self-propelled gun can match. The US M109 Paladin is able to send shells a mere 30 kilometers (18 miles).

© Sputnik / Alexander Vilf
Locked and Loaded: Russia Develops Unique Reloading Vehicle for MSTA Howitzers
The Koalitsiya-SV can simultaneously hit its targets with several shells, each traveling along a different trajectory – something only the German PzH 200 could previously boast of.

All this makes the Koalitsiya-SV akin to a tactical missile system, capable of destroying command posts, air- and missile-defense installations, communication lines and artillery batteries located well behind enemy lines while remaining outside the reach of enemy artillery.

“The introduction of the Koalitsiya-SV is a significant boost to the Russian Ground Forces’ artillery arsenal. Meanwhile, the US Army is expected to operate upgraded versions of the 1960s vintage M109 Paladin self-propelled gun," The National Interest wrote.

The Koalitsiya-SV will serve as a platform for a new, fully robotic howitzer capable of carrying out combat missions on its own.