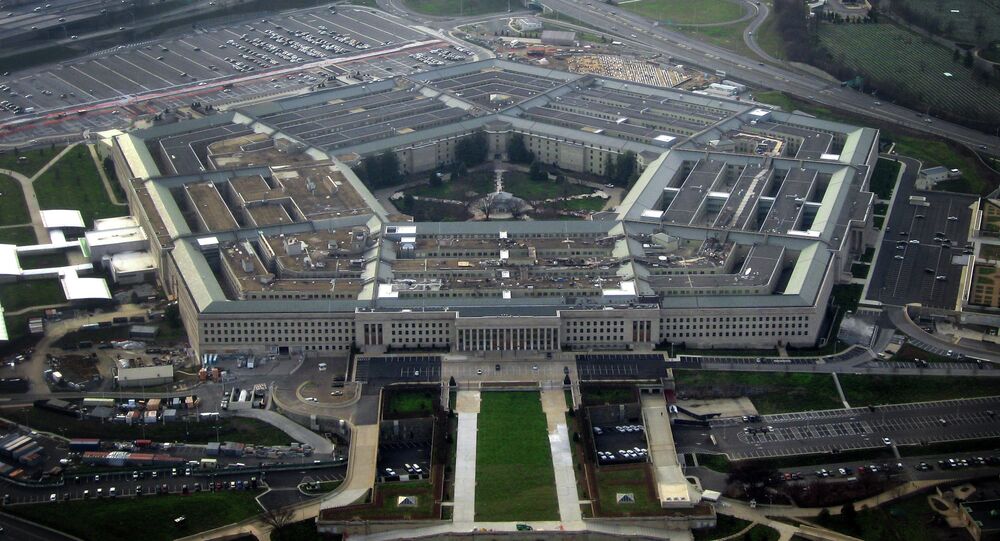 Pentagon in a Panic Over Inability to Defend Logistics Against Russia, China

US Transportation Command head Gen. Darren McDew has told the Senate Armed Services Committee the US does not have enough ships, aircraft or aerial refueling tankers to transport large amounts of equipment, supplies and manpower in the event of a major war. Military journalist Ilya Plekhanov breaks down McDew's report, and what it means for Russia.

Testifying before the US Senate earlier this month, McDew said that USTRANSCOM does not have the resources needed for the speedy transport of large quantities of materials and troops, nor for sustained resupply in the event of a major conflagration.

The Air Force General revealed that his department is currently able to airlift only a brigade-sized force using C-5 and C-17 transport aircraft to a foreign theater, adding that the military would struggle to resupply its troops if the conflict lasted for more than 30 days.

© AP Photo / Lockheed Martin
Saudi Arabia to Buy Four Lockheed Martin Littoral Combat Ships for $6Bln
As far as naval resupply is concerned, Senate Armed Services Committee head John McCain complained at the hearing that the US lacked the necessary ten ships needed to transport two combat brigades to the front, a capability that is required under current US military doctrine.

The average US transport ship is 39 years old, and less than 60% of them could be brought up to snuff for exercises or maneuvers, with the rest in need of repairs or deemed unsuitable. At the moment, McCain said, USTRANSCOM has access to only 27 military transport ships; nine of those are subject to be retired over the next six years.

Commenting on the issue, BreakingDefense.com contributor Colin Clark marked his concern over the fact that Transport Command does not have contingency plans in the event that its ships and transport aircraft are destroyed, and has not, until recently, even factored in such considerations in exercises and strategic simulations.

In his report to the Senate, Gen. McDew warned that the present strategy for alleviating the shortage of military ships and aircraft relies on the use of commercial vessels and aviation to transport troops and supplies, and that the security of these means of transport – particularly with respect to cybersecurity, is not up to snuff. For instance, up to 90% of the information used by USTRANSCOM is located on the servers of commercial companies. McDew stressed that this situation makes USTRANSCOM "distinctly vulnerable," particularly compared to other Department of Defense agencies.

Commenting on this state of affairs in an analysis piece for RIA Novosti, military journalist Ilya Plekhanov pointed out that the first modern-day US command exercises simulating a military conflict with a technologically advanced prospective enemy, like Russia or China, were carried out only earlier this year, and demonstrated that US military logistics would be faced with the danger of catastrophic losses.

The analyst explained that "in conditions of war with an enemy possessing long-range, high-precession weapons, huge warehouses, transport convoys and bunched-up clusters of equipment and manpower become an easy and attractive target for destruction."

Plekhanov emphasized that "of particular concern to the Americans are the fuel reserves for their M1 Abrams tanks, which consume three gallons per mile, and are the backbone of the US Army's mechanized brigades. These tanks won't be replaced any time soon, which means that they will continue to require huge amounts of fuel and, in the event of war, will be actively targeted for destruction."

"The Pentagon would of course like to replace the M1 Abrams, the M2 Bradley and the M109 Paladin with armored vehicles which consume less fuel; options including hybrid-electric tanks, and those using hydrogen fuel cells, are being considered, but funding for these projects' realization is unlikely to go up before 2030."

The Defense Department is expected to create a new logistics strategy before the year is out, and to start field testing of new approaches to troop and equipment transport this year and into 2018.

Ideally, Plekhanov noted, "logistics should be handled by a large number of mobile, small, dispersed, hard-to-detect, robotic carriers that would be difficult to destroy."

Plekhanov wrote that Pentagon planners have a range of prospective solutions to the current logistics situation.

© REUTERS / Umit Bektas
BP to Provide $244Mln in Jet Fuel to US Aircraft in Turkey Through Pipeline
"One of the fastest solutions available, which could be implemented immediately, is the 'smart' automation of electricity consumption by military forces at the front," the analyst explained. "That is, it is necessary to significantly reduce the supply of fuel for generators, and cut the movement of oil tanker trucks. Software and sensors should monitor the efficiency of fuel use and send this information to logistics centers."

"The problem," Plekhanov added, "is that the Americans themselves say that in the event of conflict with Russia, 'the Russians' means of electronic warfare are likely to strike communication channels' – making all this data and automation of fuel consumption essentially meaningless."

The second approach involves sustained reductions in the number of personnel involved in the provision of fuel supplies to the front.

"The loss of manpower in logistics deliveries operations in Iraq and 2003 and the death of drivers [killed] by improvised explosive devices on the roads of Iraq and Afghanistan have become an important lesson. The solution is seen in partially automated convoys, i.e. where unmanned cargo trucks follow a human-controlled vehicle at the head of the column. Completely unmanned convoys using artificially intelligence loom somewhere in the future, but they too are not discounted by planners."

© AP Photo / Gustavo Ferrari
A convoy of fuel tanker trucks escorted by a US Army vehicle enter Kuwait at the military border post of Abdaly in the Kuwait-Iraq frontier in this file photo taken January 2006
© AP Photo / Ralf Hirschberger / dpa
US Army Planning to Test Robotic Unmanned Cargo Trucks by 2020
The third solution, according to Plekhanov, involves the use of remotely-controlled cargo drones. These include: a) drones which can carry about one metric ton distances up to 100 km, b) drones carrying about 200 kg and supplying an infantry squad for a few days, and c) operational drones delivering about 20 kg of cargo– i.e. medical supplies for injured troops or spare parts for equipment.

Here too, the analyst noted, work by Russian and Chinese engineers in the area of radio-electronic warfare "remains a major headache for US logistics planners."

The fourth solution involves the use of 3D printing technology to create necessary tools or components right on the front, "but this still requires raw materials and their delivery. So this approach too does not solve the problem," Plekhanov explained.

Ultimately, Plekhanov emphasized that US planners are aware that in a conflict with Russia or China, the US would be waging war not against technologically underdeveloped countries or groups (as they have become used to in the last thirty years), but against equals or near equals.

In other words, such a conflict would take place "in conditions of the so-called system of restricted access (A2/AD – Anti-Access, Area Denial) and Multi-Domain Battle (i.e. the simultaneous operations in various spheres – on land, at sea, in the air, in space, in cyberspace and within the electromagnetic spectrum)." With this in mind, "the Pentagon is rethinking all of its strategies, including logistics."

The other side of the coin is that Russian and Chinese planners too are not wasting any time, and developing means, often times asymmetrical means, for countering US military power, and aimed at turning the Pentagon behemoth into a giant with feet of clay. This, naturally, applies to logistics as well.

US Soldier Accused of Stealing Humvees from South Korean Base