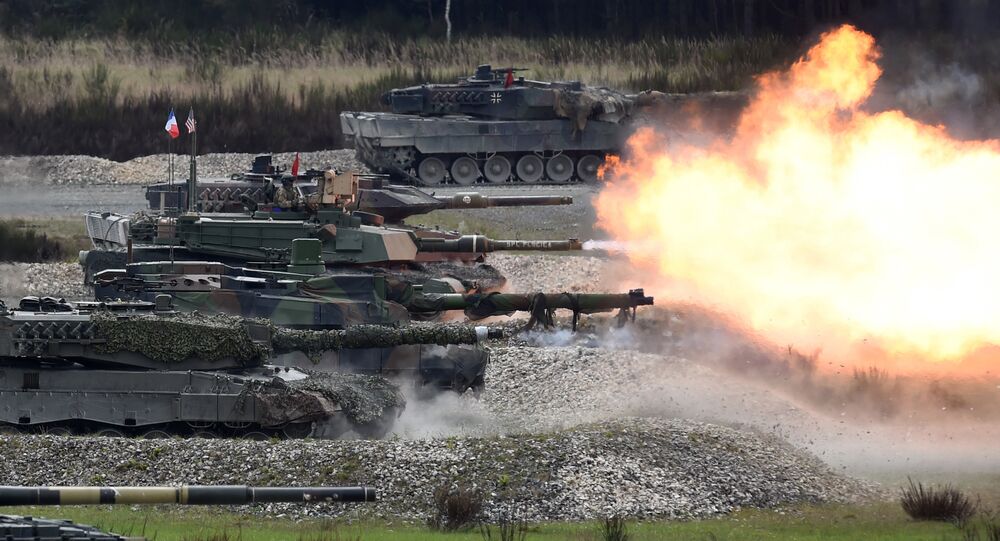 Members Only! NATO Holds Its Own Copycat Tank Biathlon Contest

Despite initially dismissing Russian tank biathlon contests as saber-rattling, NATO now holds its own version of the competition, the Strong Europe Tank Challenge.

Since their establishment in 2013, the Russian tank biathlon competitions were usually portrayed by Western media agencies as saber-rattling displays of military might rather than the contests of skill that they actually are.

Nevertheless, as the popularity of this new type of military sport soared over the last four years, has apparently prompted NATO in 2016 to establish its own event, the annual Strong Europe Tank challenge.

© AFP 2020 / Christof STACHE
An Austrian soldier arrives with a tank type 'Leopard' prior the friendship shooting of several nations during the exercise 'Strong Europe Tank Challenge 2017' at the exercise area in Grafenwoehr, near Eschenbach, southern Germany, on May 12, 2017

The 2017 competition, held at the Grafenwoehr Training Area in Germany and co-hosted by US Army Europe and Bundeswehr, was attended by teams from the United States, Germany, Poland, France and two non-NATO countries, Austria and Ukraine.

It should be noted however that the NATO event looked more like a military exercise rather than an international contest like an actual tank biathlon, held among a small group of countries with no 'outsiders' allowed and focused on disciplines like vehicle identification, battle damage assessment, and precision maneuvers.

© AFP 2020 / Christof STACHE
US soldiers welcome the crew of an Ukrainian tank type 'T-64BM' prior the friendship shooting of several nations during the exercise 'Strong Europe Tank Challenge 2017' at the exercise area in Grafenwoehr, near Eschenbach, southern Germany, on May 12, 2017

"It would’ve been more professional and honorable to compete with a large number of experienced participants in several completely different disciplines. However, that is apparently not the European way," Russian TV channel Zvezda remarked.

The 2017 Strong Europe Tank Challenge culminated on May 13, with the Austrian team winning the first place and Germany and the US coming in second and third respectively.