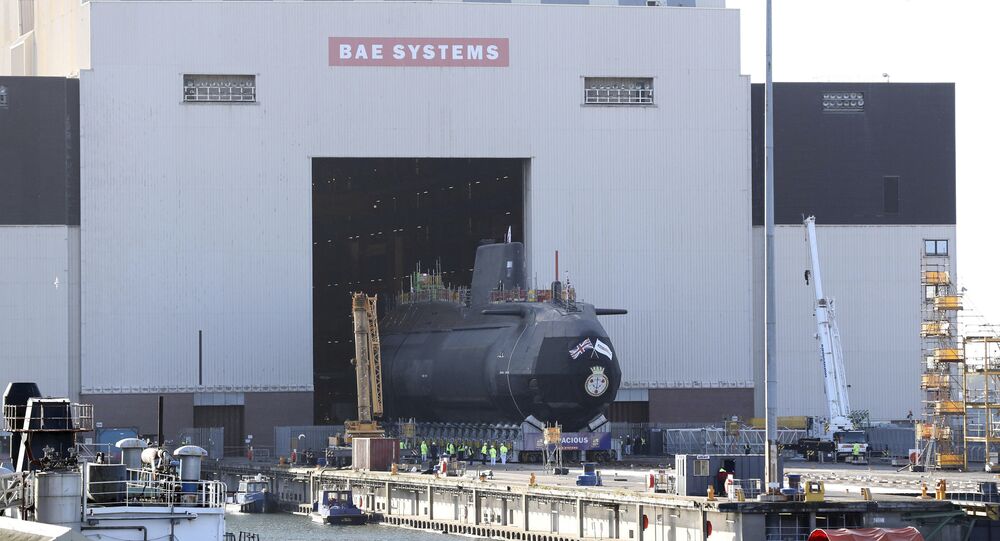 This British Nuclear Sub Can Stay Underwater for 25 Years... In Theory

Britain's newest submarine was launched - quietly - end of April, beginning of May, and it is built for stealth. HMS Audacious is in theory able to stay underwater for 25 years without the need to come to the surface.

HMS Audacious, which was launched at BAE Systems' yard in Barrow-in-Furness, Cumbria, is one of seven subs of the Astute class, which are designed to be the quietest subs in the world.

It is set to go into service in 2018 and is equipped with nuclear reactors which are big enough to power a city the size of Swindon. They are designed in such a way that they do not need refueling until 2043. They are also able to travel hundreds of miles and their maximum diving depth is a classified secret.

The seven Astute submarines will take over from the Swiftsure class, which have all now been retired, and the Trafalgar class, which were launched between 1983 and 1991 and will be decommissioned within the next ten years.

They are designed to remain hidden in the ocean somewhere around the globe for months on end, even years. Fresh water is made by distilling sea water and oxygen is produced by separating water (H2O). Carbon dioxide is removed using special gadgets.

Audacious hits the water for the first time; a proud day for our workforce #Barrow and @RoyalNavy #AudaciousLaunch https://t.co/GMCHPF5rsL pic.twitter.com/QvUAR2ZjdZ

But of course HMS Audacious and her sister ships — the Astute, Ambush, Artful, Anson, Agamemnon and Ajax — will have to return to port occasionally and submariners will not turn gray underwater.

Their food supplies will usually last around three months and being submerged — and away from natural light and fresh air — places a massive burden on the crew's mental and physical health.

"The only restrictions on how much time they spend underwater and at sea is food. They can generate their own water and air. The longest patrol ever — for a Polaris submarine — was 108 days," Lord West of Spithead, a former admiral and NATO Commander, told Sputnik.

"They are very good at intelligence gathering, sea denial and sinking other subs. They are even specially fit so that they can land special forces without surfacing," Lord West added.

But he said, ideally, the Navy needed eight, not seven Astute class subs.

The latest submarine in the most advanced class ever built for the @RoyalNavy prepares for launch #AudaciousLaunch #Barrow pic.twitter.com/zbONg9saOB

Although the Astute class are nuclear-powered, they carry only Spearfish torpedoes and Tomahawk sea-to-land missiles, not nuclear warheads.

The Royal Navy currently has four submarines which carry the UK's nuclear deterrent, the US-manufactured Trident missiles. The government has said it plans to replace the Vanguard-class boats with the Successor class, which will carry a new missile, again made in the US.

The Labour Party has been heavily divided over the issue of renewing Trident. The party's leader, Jeremy Corbyn, and a large section of the membership believe Britain should dispense with a weapon it would never in reality ever use, especially considering the billions involved.

But the party's official policy remains that it supports renewing Trident — a position which was first stated under Tony Blair and again under Gordon Brown and Ed Miliband.

The sun shines on Audacious, the fourth Astute class submarine, as she emerges from the Devonshire Dock Hall #AudaciousLaunch #Barrow pic.twitter.com/guHEuuYPUy

Prime Minister Theresa May has claimed Labour under Corbyn weak on defense and the Labour MP for Barrow, John Woodcock, who is defending a majority of only 795, said recently: "I will not countenance ever voting to make Jeremy Corbyn Britain's prime minister."

Wired reported that Stuart Godden, the director of engineering for BAE Systems' submarines, had compared the difficulty of building them to NASA's Space Shuttle.

"In terms of environment, they're 200 miles up, we're hundreds of metres beneath the sea. It's very benign up there, because there's no pressure or corrosion, whereas it's very high pressure and very corrosive under the sea," he said.

Will Blamey, BAE Systems Submarines Managing Director, said after the lunch: "We now look forward to working alongside Audacious' crew to prepare her for sea trials, before she joins her sister submarines in service with the Royal Navy."