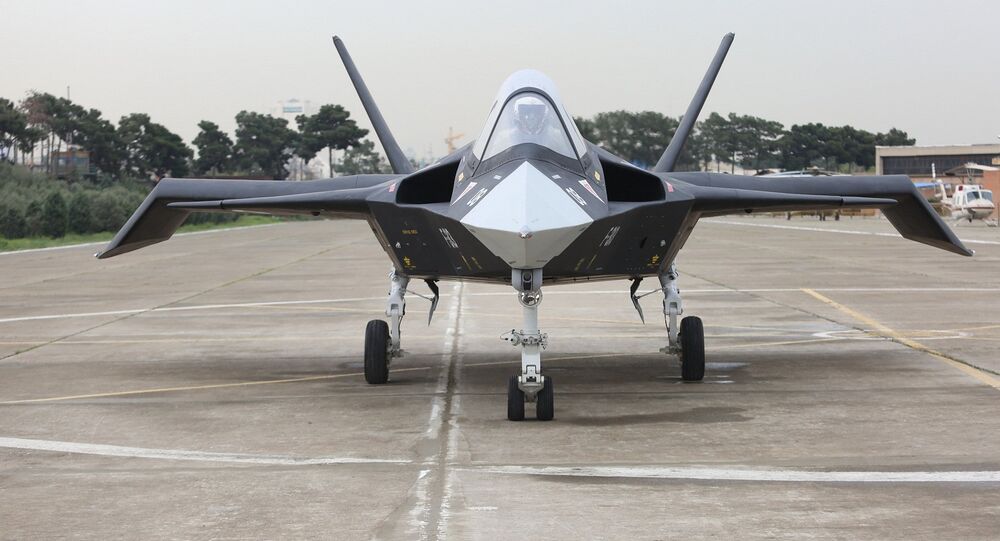 Footage of Iran's new Qaher F-313 fighter jet taxiing on a runway at a military exhibition in Tehran has caused uproar among defense analysts, who previously claimed that the prospective aircraft was just a hoax. Iranian journalist and political analyst Emad Abshenas told Sputnik why Iranian engineers have every right to be proud of their creation.

At a military exhibition in Tehran over the weekend which was attended by President Hassan Rouhani and Defense Minister Hossein Dehghan, Iran offered the world a glimpse of its new Qaher ('Conquerer') F-313 stealth fighter jet. Iranian media showed off a prototype of the plane taxiing along a runway, seemingly indicating that work on the new aircraft was well underway.

First unveiled in early 2013, Iran's prospective 5th Generation fighter plane has since received a slew of upgrades. For example, while the 2013 version had one engine, the latest iteration of the plane appears to have two, similarly to the US's F-22 Raptor. The size of the cockpit also appears to have been increased, with other possible improvements under the hood.

For many years after 2013, many mostly Western defense analysts and journalists derided the F-313, claiming that it was merely a 'model' or a 'cheap copy' of US planes. The weekend's demonstration suggests that Iran is set on proving otherwise.

IRIB News Agency/YouTube
Iran’s Top-Secret F-313 ‘Conqueror’ Stealth Fighter Conducts Taxi Trials (WATCH)
Speaking at the defense exhibition, which showed off Iran's new aerospace defense products, including the new domestically designed and built Kowsar training jet aircraft, President Rouhani emphasized that "Iran has already once fallen to cowardly aggression. Therefore, we will not ask for permission to strengthen our armed forces, our missile and aviation capabilities." During the show, the president examined exhibits of several new weapons, including the Mohajer 6 tactical drone, the Nasir anti-ship cruise missile, and a new air-to-air missile called the Fakour.

As for the Qaher F-313, Iranian media says that the aircraft has begun the test phase.

Ahmad Vahidi, former defense minister who presided over the introduction of the F-313 concept in 2013, told media that the plane will have stealth capability, and from the perspective of form factor and appearance, stands alongside the most advanced fighters in the world. On the latter account, Iranian experts themselves have indicated that this may be too ambitious a boast to make, since the technical characteristics of the plane have yet to be demonstrated.

© AFP 2021 / YOUNES KHANI / MEHR NEWS
Russia Can Assist Iran in Development of Its Most Advanced Military Aircraft
Nevertheless, Emad Abshenas, political analyst and editor-in-chief of the Iran Press newspaper, told Sputnik Persian that Tehran has good reason to be proud of the new aircraft.

"At the moment, according to the characteristics which have been presented, our military experts and other experts have said that this aircraft bears some similarity to the well-known American plane, the F-35," Abshenas noted.  "It's too early to judge at the moment, of course, because full-scale testing has yet to be carried out."

"But in any case, for us it is already a great achievement that Iran has itself designed and built such an important combat system – a prospective 5th generation fighter," the observer stressed. "After all, as soon as the country gains the capability to produce the necessary armaments itself, it will no longer face the pressure of [dependence on] other nations."

Abshenas recalled that "before the Islamic Revolution of 1979, Iran had access to the most advanced US military aircraft technologies which existed at the time. Practice showed, during the Iran-Iraq War, that when we needed spare parts and components for the US-made combat aircraft, the Americans refused to supply them due to international sanctions. This became a big problem for our defense system, which was once considered among the most powerful in the world. It was at this time that the idea first arose that we must try to satisfy the needs of our defense complex," including in the area of combat aircraft.

© AFP 2021 / ATTA KENARE
Iran Showcases Long-Range Sayyad-3 Missiles at Military Parade in Tehran
Aviation experts and Iranian media reports have said that the Qaher F-313 is being designed with low radar signature, low-altitude flight capability, and ease of maintenance in mind. The plane is also designed to take off and land on short runways, media say. The small aircraft could be could be complemented with two 2,000 pound bombs, or a larger number of smaller guided air-to-ground and air-to-air missiles.

As far as the plane's unique, bird-like design is concerned, Abshenas noted that Iranian engineers "had been following very closely the advanced technologies that appeared on the world market," over the years, "studying prototypes, and trying to recreate the necessary components themselves. The result of these efforts is evident: a new generation fighter aircraft, the F-313, fully equipped with the latest technology. We are setting the task for ourselves of making this plane up to par with the most powerful and modern weapons systems in the world," the analyst concluded.

Indeed, the creation and production of a functional 5th-generation fighter aircraft would allow Iran to join the ranks of a very select group of countries. Along with the US, Russia and China, only India, Japan and Turkey can afford the luxury of doing so.

In any case, no matter how much the Iranians invest into their F-313, it's unlikely that costs will be able to climb as much as they have for the F-35. According to the US Defense Department, that program is expected to cost US taxpayers over a trillion dollars over 50 years, making it the most expensive weapons systems ever created.