Observers worldwide took note of the array of weapons put on display during Saturday's military parade in Pyongyang, including mockups of new long-range missiles. In a special commentary for Sputnik, analyst Vasily Kashin said that while the country's ICBM program is still far from the test phase, its leaders certainly aren't lacking in ambition. 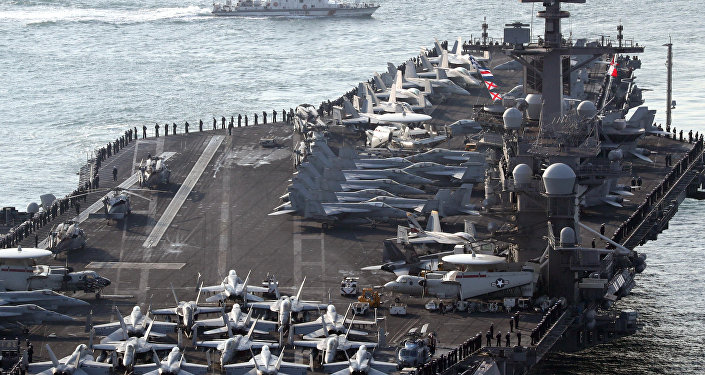 © REUTERS / Yonhap
Russian, Chinese Ships Tail USS Carl Vinson in East China Sea
At the moment, along with a range of tactical and short-range missiles such as the Hwasong-6, a derivative of the Scud, North Korea is also known to be engaged in the testing of several medium and intermediate-range systems, including the liquid-fueled Hwasong-10 IRBM. Flight testing of the latter is ongoing, with operational range estimated at 2,500-4,000 km.

More impressive, analysts say, are North Korea's two solid-fueled medium-range missiles – the sea-based KN-11 Pukkuksong-1, and its ground-based cousin, the KN-15 Pukkuksong-2. These mobile systems' range is unknown, with intelligence services offering a wide range of estimates between 1,250 and 2,500 km.

In a special commentary for Sputnik, well-known Russian military analyst Vassily Kashin explained that the KN-11 and KN-15s are known to be among North Korea's most advanced missile systems. More importantly, however, they are the closest among the new missiles to actually being deployed.

© REUTERS / Yonhap
Lavrov: Russia Hopes US Not to Take Unilateral Actions Against North Korea
"At the moment, successful testing of these missiles is being carried out," the expert explained. "Factually, the North Koreans have reached the same level that China was at in the early 1980s, when Beijing was carrying out flight testing of its JL-1," China's first submarine-launched missile, "created on the basis of the ground-based DF-21" (a Chinese mobile medium-range ballistic missile).

Kashin recalled that it took China 5-6 years to complete flight testing on the JL-1. "The North Koreans began flight testing on the Pukkuksong-1 in 2014, and it's possible that they will be ready to deploy them closer to the end of the decade. These missiles have an estimated range of up to 2,000 km, which is comparable to the JL-1 and the DF-21A."

According to the analyst, a successful deployment of these missiles could be seen as a real achievement for the North Koreans. "Pyongyang will attain the guaranteed ability to strike at targets anywhere in South Korea and Japan, but still would not be able to reach the United States."

North Korean engineers are believed to have made about a dozen tests of the Pukkuksong-1 and its ground-based variant since October 2014; the latest test is thought to have taken place in February. In August 2016, Pyongyang carried out a successful submarine-launch of the Pukkuksong-1.

According to Kashin, these successes are creating the basis for further progress. However, "the transition to the creation of an intercontinental ballistic missile in general and a solid-fueled-based ICBM in particular will require a qualitative leap in the development of North Korea's production base and test infrastructure," he emphasized.

© AP Photo / Wong Maye-E
North Korean Tinderbox: Why Nuclear Conflict Possible Any Day Now
North Korea has been engaged in the development of the KN-08, also known as the Rodong-C or Hwasong-13, a road-mobile ICBM is believed to have been under development since the early 2010s. Pyongyang has showed off the missile at parades on several occasions, including the 100th anniversary of the birth of Kim Il Sung in April 2012. However, two suspected tests, which US intelligence said had been carried out in October 2016, were believed to have ended in failure.

Kashin stressed that in order to actually produce such advanced weapons, the North Koreans "will have to learn how to produce solid fuel rocket engines with a large diameter. They will have to experiment with new fuels and new missile casing. An important limitation here will be based on their ability or lack thereof to purchase the necessary equipment abroad or create their own (but apparently, also using foreign components)." 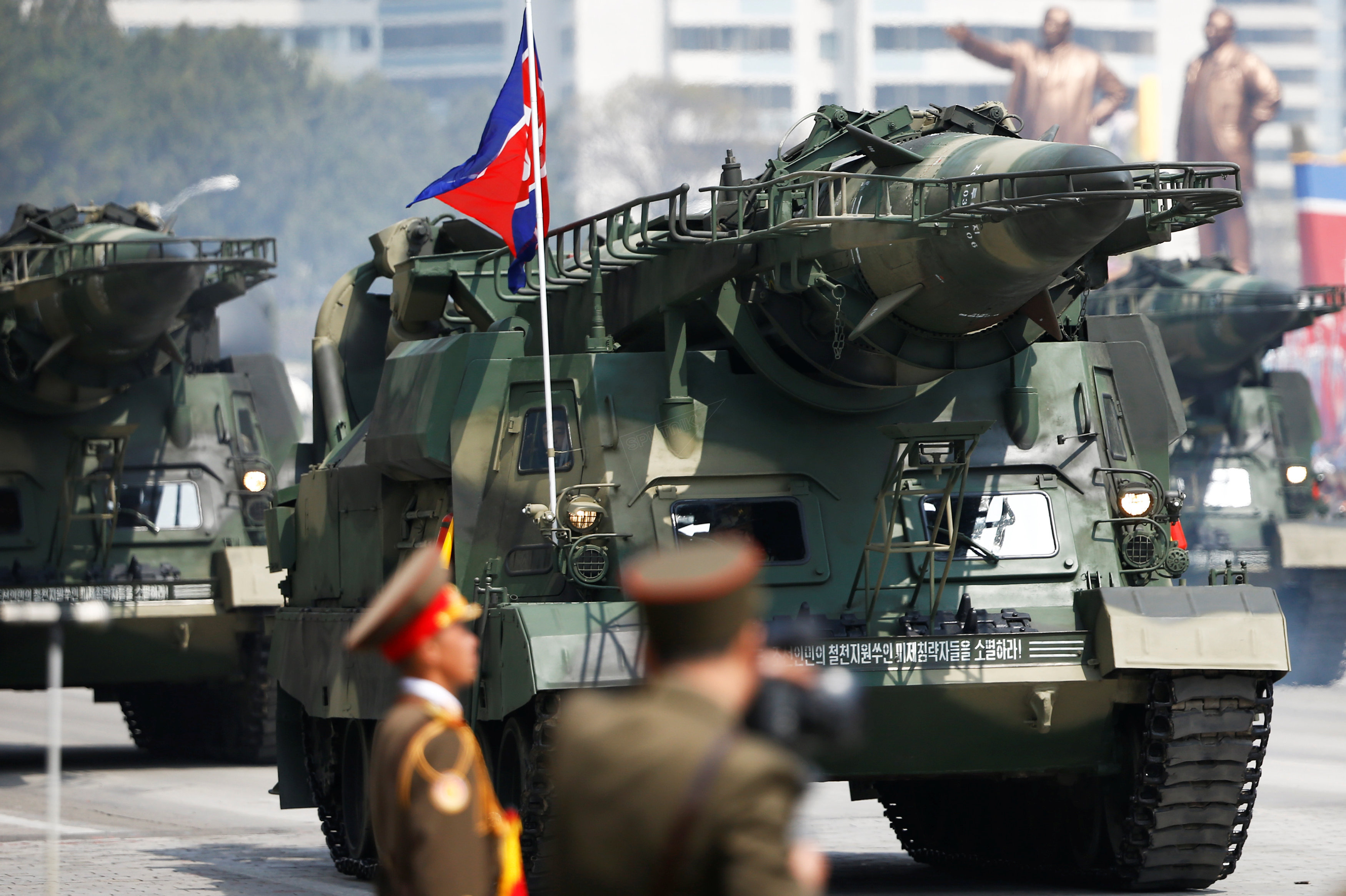 © REUTERS / Damir Sagolj
Missiles looking similar to Soviet Scud-As are driven past the stand with North Korean leader Kim Jong Un and other high ranking officials during a military parade in Pyongyang, April 15, 2017.

Furthermore, the analyst noted, "in order to be tested, the ICBMs will have to be launched over Japanese territory in the direction of the southern Pacific Ocean. As the Chinese experience in testing its DF-5 ICBMs in the early 1980s shows, testing will require the creation of a whole fleet of specialized vessels equipped with complex measuring equipment and, probably, new warships for their protection and escort."

"Attempts to conduct such tests will be likely to face a backlash from the US and its allies, including attempts to shoot the missiles down during the first stage of their flight (if the US and Japanese missile defense systems in Japan are ready to do so) or attempts to block the measuring equipment onboard the North Korean vessels."

© REUTERS / Kim Hong-Ji
Why Pence's Threats Against N Korea Are 'Nothing More Than Bluff'
According to Kashin, the ICBMs' testing will also take about 5-6 years. China "deployed its DF-31 ICBMs 15-20 years after deploying the Jl-2 and the DF-21." In other words, according to the analyst, it will be decades before Pyongyang is actually able to successfully field a true intercontinental ballistic missile.

Faced with these limitations, which Pyongyang must surely be aware of, the analyst noted that there are several possible reasons for them to have rolled out their experimental ICBMs at Saturday's parade.

"Why did the North Koreans feel the need to draw attention to weapons systems which, even under the most optimistic scenario, cannot be deployed until the second half of the 2030s? It's possible that from Pyongyang's point of view, this is a demonstration of its determination and, at the same time, an invitation to talks, which North Korea, despite its isolation, intends to conduct from a perceived position of strength." 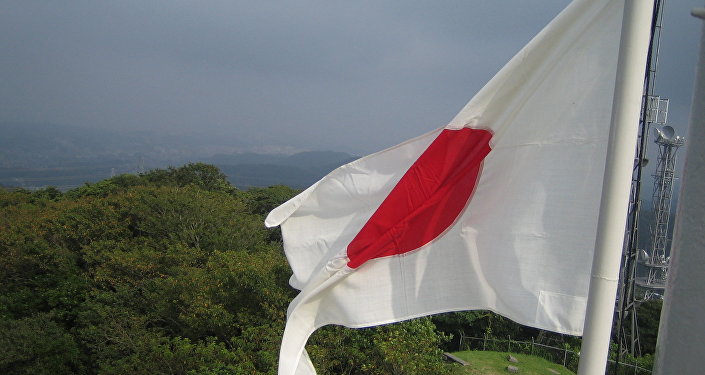 © Flickr / Colin McMillen
Japanese Politician Calls for Dialogue With N Korea as Way to Resolve Tensions
It's possible, Kashin added, "that these potential missile systems are what North Korea is ready to sacrifice in exchange for a reduction in sanctions pressure. The country's security is guaranteed by its ability to inflict unacceptable damage to key US allies South Korea and Japan in the event of war."

Ultimately, in Kashin's view, Pyongyang "will not abandon their nuclear weapons and medium-range missiles, but could agree not to conduct new tests or develop intercontinental missiles (ranged 5,500 km and up) in exchange for economic and political concessions. This, it's possible, may very well be Pyongyang's ideal exchange scenario."