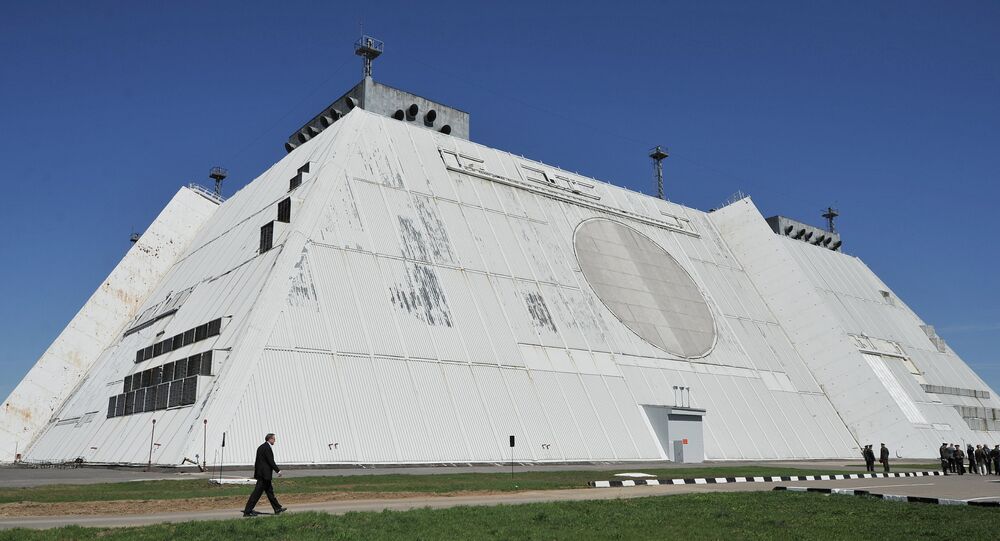 Half a century ago, March 30, 1967, the Soviet government established the Anti-Missile and Space Defense Forces. The new entity combined all the then-existing missile defense units. The new forces were aimed at protecting USSR’s crucial industrial and military areas from American intercontinental ballistic missiles (ICBM).

© Flickr / US Army Corps of Engineers Europe District
US Radars Cover Almost All Russian Territory - Russian MoD
Despite the fact that by the time the Cold War had already entered its de-escalation stage, nuclear deterrence was a matter of life and death for the Soviet Union.

By 1967, the United States had obtained nearly 32,000 nuclear warheads, the record high in the history of the Moscow-Washington standoff. Moreover, the Minuteman II ICBM entered service with the US military and was capable of breaching any missile defense shield.

By the late-1980s, the USSR created the A-135 missile defense system which still continue to remain operational. However, the history of Russia’s missile shield is long and challenging.

Soviet scientists and engineers first tested ballistic missile interception possibilities back in 1945. However, active research and development works were launched in 1953. The Soviet military leadership was very concerned about the US reportedly developing ICBMs.

On February 1, 1956, two missile defense projects were presented, one of which, the Sistema A, was later approved by the government. On August 17, the government ordered the establishment of a missile defense training range near Lake Balkhash, in Kazakhstan. The site was named Sary Shagan and has been used since then by the Russian military.

© Flickr / U.S. Missile Defense Agency
US Missile Defense System in Alaska 'Part of Nuclear Potential', Poses Threat - Putin
Sistema A was controlled by a ground-based computing complex, which calculated the trajectory of a missile based on information gathered from three radio radars. The radars were located at a distance of 170 kilometers from each other, forming a triangle with a V-1000 intercepting missile launcher in the center.

The first practical tests were a failure though. The computers lacked the power to accurately calculate the trajectory. The first successful test was conducted March 4, 1961.

On September 1, 1971, the first Soviet full-fledged missile defense system, the A-35, was deployed and put on combat alert around Moscow. The system was based on principles and technologies tested on the experimental Sistema A.

The A-35 comprised the main command and computing center, two long-range radio-radar stations and four launching complexes. The entire infrastructure was deployed in the Moscow region. The A-35 was capable of intercepting single-block ballistic missiles at a distance of 130-400 km and at an altitude of 50-400 km. The system covered an area of 400 square km.

The A-35 was also planned to be deployed in other areas. However, the 1972 Anti-Ballistic Missile Treaty (ABM Treaty) between the US and the Soviet Union allowed such missile defenses only in two areas in each of the countries. In 1974, an amendment to the treaty limited the number of missile defense covered areas to one in each of the two countries. In 2002, Washington unilaterally withdrew from the treaty.

The A-35M, the upgraded version of the A-35, was put in service in 1977. Its main distinctive feature was the capability to intercept multiple-warhead ballistic missiles. At the same time, a brand-new missile defense system was in development. It was called the A-135 Amur and entered service in 1990 and five years later it was put on combat alert in the Moscow region.

"Currently, the A-135 is part of the 9th division of the 1st air- and missile-defense army [part of the Russian Aerospace Forces]. The system has been modernized for several times, first of all, including its computing devices. As a result, the system now runs much faster," military expert Mikhail Khodarenok told Sputnik.

© AFP 2021 / DANIEL MIHAILESCU
US 'Walking on the Razor's Edge' by Building Global Missile Defense Shield
To cut a long story short, here is an exemplary algorithm of how the system works. Russian military satellites detect the missile launch of a potential enemy and then the missile is tracked by the Voronezh and Daryal radio-radar stations. At this point, the Russian leadership has time to make a decision on a retaliatory counterstrike. At the same time, the combat mode is activated on the A-135.

The A-135 includes the Don-2N radio-radar station, located in Sofrino, near Moscow. It detects warheads flying in space, at a distance of up to 3,700 km and the information is transmitted to the 5K80 command point. Then, the information is processed and transmitted further to missile launching sites. Each of the missile launching sites deployed around Moscow has 12-16 silos containing 53T6 interceptors capable of hitting targets at a distance of up to 60 km and at an altitude of up to 45 km. As of 2016, 68 53T6 interceptors are in service.

"The main feature of the A-135 is that it is completely autonomous, including target acquisition, locking, authorization of the interceptor launch and its aiming," Khodarenok said.

He added that the A-135 is also capable of distinguishing between a warhead and ballistic missile decoys.

The Future of Russia’s Missile Defense

Despite the fact that the A-135 is a sophisticated and efficient system, it is aging. Its replacement is currently in being tested.

"In the future, the A-135 will be replaced by the A-235 Nudol nest-generation missile defense. Information about the new system is classified.

© Sputnik / Maxim Blinov
Russian Army to Receive Hypersonic Weapons, S-500 Missile Systems Soon – Putin's Aide
According to available information, it will have a longer range and an increased accuracy. Its development is on schedule, but it’s too early to talk about specific dates," Khodarenok said.

At the same time, according to him, a missile defense system does not provide 100 percent protection from a massive nuclear strike and is capable of intercepting only a limited number of warheads. In addition, the Achilles’ heel of such systems is their silos because potential enemies can obtain their coordinates.

"This last problem will be resolved after S-500 advanced missile defense reinforces the A-235 in the Moscow region and provides protection from enemy missiles in other regions. The S-500 is a mobile system and can change quickly change location," the expert explained.

In February, Russian Deputy Defense Minister Yuri Borisov said that the first development prototype of the S-500 will be ready by 2020. The system is expected to be capable of intercepting aerodynamic targets (planes, helicopters and drones) and ballistic missiles. Its operational range will be 600 km. The S-500 will be able to destroy up to 10 hypersonic ballistic targets at the same time.

Russia to Take Countermeasures in Response to US Missile Defense System