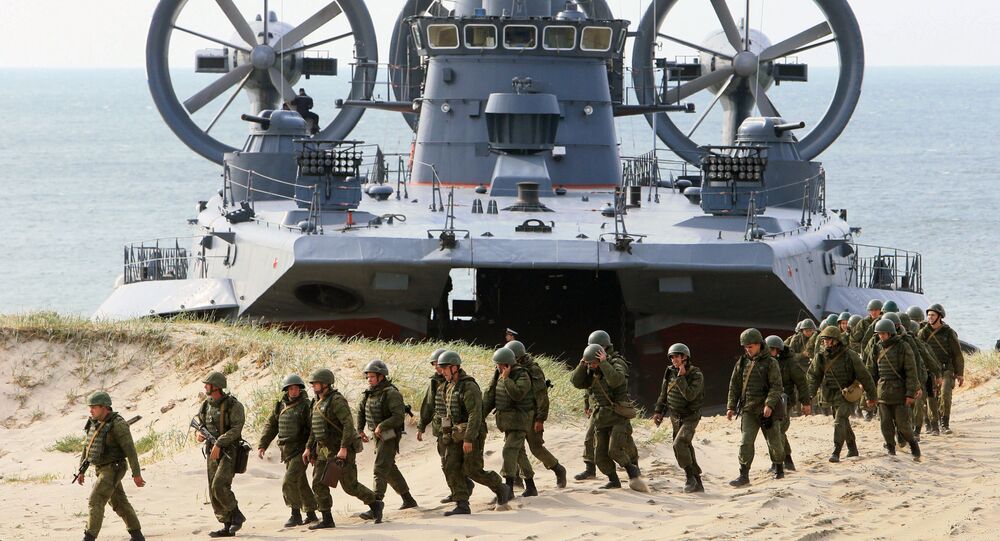 In September, Russia and Belarus will hold a large-scale military exercise dubbed Zapad-2017 (West-2017). The Zapad drills are a quadrennial joint exercise and were held for the last time in 2013. However, this year’s drills are regarded by many in Belarus and Europe as a "threat."

Concerns about the Zapad-2017 drills stem mostly from the scope of the upcoming war-game. According to the Russian and Belarusian Defense Ministries, during the drills Russia will send a major military force to Belarus.

© Sputnik / Mikhail Voskresenskiy
Secure Sky: Belarus to Purchase Russian Sukhoi Su-30SM Jet Fighters in 2017
However, the defense ministries do not provide exact numbers.
The main of the drills is to check the combat readiness of the regional group of forces and to test its military hardware.

The Zapad drills are held every four years at Russian and Belarusian military ranges and include operative personnel and equipment deployment activities.

Judging by the Zapad-2013 drills, the 2017 maneuvers are expected to be a truly large-scale exercise. In 2013, 10,000 Russian and Belarusian personnel were involved in the drills.

Russian Troops Will Come and Go

© Sputnik / Evgeny Biyatov
Serbian, Russian, Belarusian Forces Preparing to Hold Joint Anti-Terror Drills
During the Zapad-2013 exercise, some 2,500 Russian troops were deployed to Belarus. Today, the pro-opposition wing of the Belarusian elite fears that this year Russia plans a large-scale deployment of troops with the view of further occupation (or preparing for occupation) of Belarus.

Recently, Anatoly Lebedko, leader of the United Civic Party of Belarus, said that Belarusian politicians and citizens allegedly wondered whether the Russian forces will return to Russia or not after the drills.

The same concerns were also expressed by Alexei Janukevich, the leader of the Belarusian Popular Front opposition party (BPF Party). On February 4, the party announced a public campaign against the drills. On February 13, BPF activists launched collection of signatures, calling on the government to prevent deployment of Russian troops.

In turn, President Lukashenko said all allegations about Russia's plans to occupy Belarus make no sense.

"Russian troops involved in the drills will be deployed in Belarus and after the drills they will return to Russia just the same way. Russia will never occupy Belarus," Lukashenko said on February 3.

© Sputnik / Igor Russak
Belarus Leader Asks Russia to Provide More Jets Instead of Creating Military Base
In a television interview on February 23, Belarusian Defense Minister Andrey Ravkov said: "The hysteria recently whipped up by separate 'experts' about Russian military occupation of Belarus is nothing but an attempt by some marginal forces to win political gains by speculating on the issue of Moscow- Minsk relations."

According to the minister, the Zapad-2017 drills pose no threat to Belarus’ national sovereignty.

"The goals of the drills, the areas of deployment and the number of personnel, everything is coordinated with Minsk. All troops movements are also controlled by Belarus," Ravkov underscored.

© AFP 2020 / JANEK SKARZYNSKI
Russia, Belarus Concerned About NATO Moving East, US Air Defense
Despite a reserved reaction from NATO Secretary General Jens Stoltenberg, certain leaders have considered the exercise as a negative move.
For example, Lithuanian President Dalia Grybauskaite described the drills as "preparations for war with the West."

"We’re seeing different threats, and they are rising. In particular, we are concerned about the Zapad-2017 drills which will concentrate various aggressive forces. Demonstrative preparations for war with the West are underway," she said.

Moreover, Ukrainian President Petro Poroshenko suggested that Lukashenko would not agree on a large-scale deployment of Russian troops because the Belarusian president does not want to mar relations with Kiev.

"The Kremlin is mounting pressure on Belarus. However, I’m sure that Lukashenko will not let anyone use Belarus’ territory for hostile actions against Ukraine," Poroshenko said aid at a meeting of the leadership of the Ukrainian Armed Forces on February 22.

In turn, Minks has repeatedly underscored that Western countries should not regard the Zapad-2017 drills as a challenge or threat.

"Everyone who wants to make sure that we’re not going to attack anyone will be invited [to the drills]. It’s absurd to suppose that Belarus can be an aggressor. Our posture is defensive," the president said.

Commentators note that concerns about the upcoming drills stem from a remark by Russian Defense Minister Sergei Shoigu. On November 2, 2016, during a meeting with Belarusian counterpart Ravkov, Shoigu expressed discontent with the expansion of NATO infrastructure in Eastern Europe.

According to him, the Zapad-2017 drills will be a response to the alliance’s hostile actions.

© Sputnik / Vladimir Pesnya
Kremlin Calls Claims of Russian Military Buildup on Belarus Border ‘Absurd’
A month later, Deutsche Well reported that that Moscow was pressuring Minsk and the 2017 maneuvers in Belarus would be unprecedented in scope. According to the report, the Russian Defense Ministry would use 4,126 railway cars to deploy troops and personnel involved in the drills.

According to military expert Vadim Soloviev, the media will continue to stoke hysteria over the exercise.

"We will see a lot of articles and reports containing groundless conclusions about preparations to occupy Belarus, Ukraine and other countries. It cannot be ruled out that journalists will draw inspiration from statements by officials," Soloviev told RT.

According to the analyst, the goal of this "disinformation campaign" is to drive a wedge between Moscow and Minsk.

"The West is not interested in a close military alliance between Russia and Belarus. But they don’t know how to deal with it. So, they have launched an information campaign," he concluded.