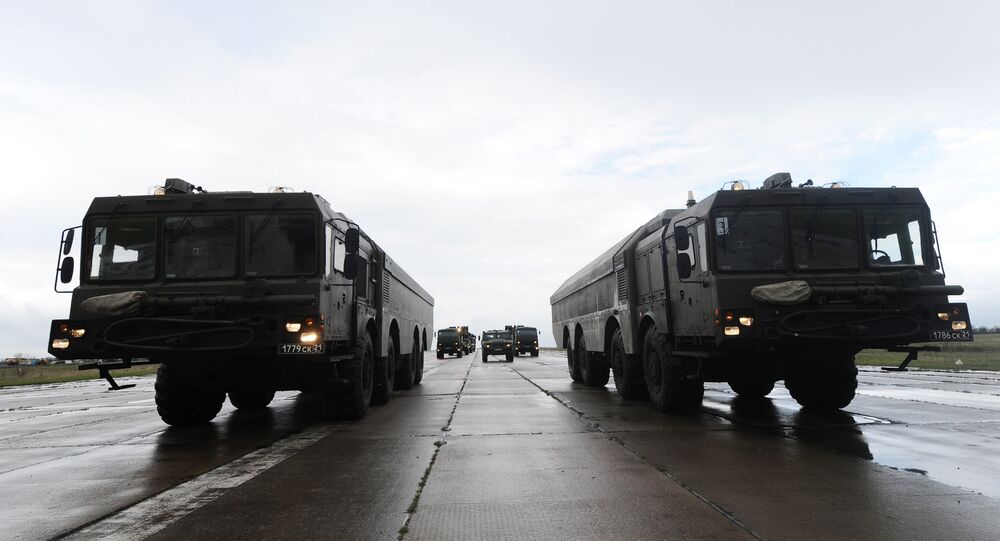 On Wednesday, Izevstia reported that the first battery of the Bastion-P costal defense system entered service with the 520th Separate Coastal Missile and Artillery Brigade. The battery is now based in the Yelizovsky District, which runs along the southeastern tip of the peninsula. Navy headquarters told the newspaper that the deployment took place late last year.

Prior to the deployment, the area was defended by the Redoubt coastal defense system, a Soviet-era design developed in the 1960s and produced until the mid-1980s. In the Far East and elsewhere, these mobile systems are now being replaced by the Bastion system, with complete rearmament in the Far East expected to be completed in the near future.

Deliveries of the K-300P Bastion-P to the Russian military began in 2010. The system is designed to engage surface ships, carrier battle groups, landing craft and convoys, as well as ground-based targets. It is armed with the P-800 Oniks supersonic anti-ship missile, which is capable of cruising at speeds of up to Mach 2.5. The Oniks has a maximum range of between 120-300 km, and can cover up to 600 km of coastline. The weapon has the unique ability of soaring up to 14 km into the air before swooping down and skimming as little as 5 meters above the sea surface during its final stage of flight.

© Sputnik / I. Nosov
Putin Calls for Continued Reinforcement of Russia's Far East, Arctic Borders
A typical Bastion-P battery includes four launch vehicles, armed with two missiles each, command and control, support and loading vehicles. When accompanied by a secondary support vehicle, the system can remain on active standby for up to 30 days at a time. Once deployed, the Bastion-P's missiles can be prepared to fire within five minutes, and within 2-5 second intervals.

Speaking to Izvestia about the deployment, former Navy deputy commander and retired Admiral Igor Kasatonov explained that the military is presently undergoing comprehensive rearmament. This "applies not only to the construction of new ships, submarines, and bases, but takes into account the need to protect them, and to ensure their ability to deploy unhindered. All these tasks are provided by anti-aircraft and anti-missile systems," including the Bastion system.

© Sputnik / Vitaliy Ankov
A Bastion coastal defense missile system during a drill in Primorsky Territory in the Russian Far East.
© Sputnik / Ramil Sitdikov
Russia to Boost Far East Missile Defense Amid China's ICBM Deployment - MP
Respected military analyst Vladislav Shurigin, meanwhile, told the newspaper that the Kamchatka deployment is undoubtedly meant to shore up the defense of Russia's strategic nuclear submarine fleet. "Kamchatka is the most important base for Russia's submarine fleet in the Pacific," he said.

"During the Cold War, the US Navy planned not only to strike at the bases in Kamchatka, but to block the Soviet strategic missile submarines from exiting their bases using anti-submarine warfare ships, aircraft and attack subs," the expert recalled. "According to some sources, the US even considered landing marines in the area."

The 520th Separate Coastal Missile and Artillery Brigade, then known as the 21st Coastal Missile Regiment, was charged with protecting the Soviet subs from enemy attacks until they could safely submerge, and with disrupting any landing parties that might come their way. Their mission remains much the same today, Shurigin indicated.

At the moment, there are two submarine divisions in Kamchatka – the 10th and 25th. Together, they form the 16th Submarine Squadron. The 25th division includes the Pacific Fleet's strategic submarines. In 2010 and 2012, the fleet was supplemented by two Borei-class subs, the newest class of Russia's nuclear-powered ballistic missile submarines. Three more Borei-class subs are expected to be delivered to the Pacific Fleet by the end of the decade.

© Sputnik / Ildus Gilyazutdinov
Crew of the Alexander Nevsky nuclear submarine topside at a welcome ceremony for the Navy's new Borei-class project 955 vessel at Kamchatka's Vilyuchinsk base.

Last week, speaking at a ministerial board meeting, Defense Minister Sergei Shoigu reported that the combat strength of the Eastern Military District had grown by over 10% in 2016. The number of battalion-level tactical groups was increased to 20, and troops received 723 pieces of heavy armaments, military and special hardware.

Some observers couldn't help but get the sense that reports of the Bastion-P's deployment coming out now may also be connected to Japanese Foreign Minister Fumio Kishida's remarks last week that the disputed Kuril Islands would be subject to defense by the US security umbrella in the event that they were transferred to Japan.

© Sputnik / Ekaterina Chesnokova
No Consensus on the Horizon: Russia, Japan Still Bickering Over Kuril Islands
Last Tuesday, speaking to parliament and asked what would happen if one or more of the islands were transferred, Kishida indicated that they would fall under the Japanese-US Treaty on Mutual Cooperation and Security, which obliges both parties to mutual defense. "All Japanese regions are covered" by the treaty, he said.

Also last week, Japan launched a formal protest against Russia after Moscow named five formally unnamed islets in the Kurils. Russia responded to the protest by pointing out that the islands are Russian territory, and that giving them names is the country's sovereign right.

The dispute over the Kurils started shortly after the end of the Second World War. Moscow and Tokyo never signed a permanent peace treaty due to a disagreement over the status of the four islands, which dot the sea stretching from Kamchatka in the north to the northern-most Japanese island of Hokkaido in the south.

Late last year, Russian President Vladimir Putin visited Tokyo and met with Prime Minister Shinzo Abe. The leaders agreed to establish economic cooperation on the islands, ostensibly with the aim of creating favorable conditions for peace talks. However, in spite of Tokyo's hopes, Moscow has since reiterated that Russian sovereignty over the islands is not subject to negotiations.

© REUTERS / Carlos Barria
PM Abe Touches on Japan's Top Foreign Policy Priorities During Whirlwind US Trip
Therefore, some observers believe that the two countries' differing positions, combined with the regular spats over the islands popping up now and again, will make signing a peace treaty very difficult, no matter what possible economic benefits might exist.

No Consensus on the Horizon: Russia, Japan Still Bickering Over Kuril Islands