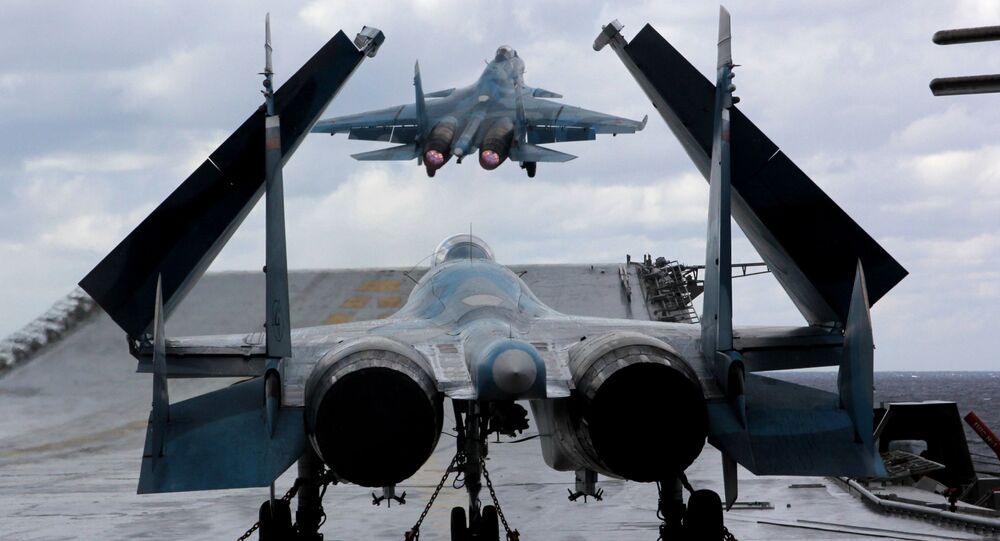 The naval group led by the Admiral Kuznetsov aircraft carrier has returned to its home port of Severomorsk following a two-month-long deployment to the eastern Mediterranean where it took part in Moscow's anti-Daesh operation. Defense analyst Alexander Zhilin told Radio Sputnik that the mission has revealed what the Russian Navy is capable of.

"I think that all tasks that the aircraft carrier-led group was supposed to fulfil were accomplished. These include cooperating within the group, creating interferences for the enemy and flying missions in harsh weather," he said. "Unlike combat operations, military exercises preclude [the armed forces] from achieving these results in terms of mastery and battle management."

Zhilin, who heads the Center for the Study of Applied Problems of National Security, also said that Admiral Kuznetsov's deployment serves as testament that Russia has powerful non-nuclear means of deterrence and that it can complete any mission.

© Sputnik / Sergey Eshenko
This is What Russia's Navy Can Learn From Admiral Kuznetsov Carrier Mission in Syria
"Let the Pentagon and the UK Ministry of Defense say whatever they want, this is hysterics. On the one hand they claim that the Russian Navy is incapable of doing anything. Then they ask for more funding. What for? So that they could match our naval forces," he asserted.

These remarks echoed those made earlier by Admiral Vladimir Korolev, the commander of the Russian Navy, who visited the Admiral Kuznetsov on February 9. He said that the "priceless experience" our naval aviators have gained and the significant damage inflicted to the enemy should contribute to "dispelling doubts over the capabilities of Russian naval forces."

Zhilin shared these sentiments, saying that the mission has brought a wealth of experience.

"This is a priceless experience, with both successes and challenges which surfaced in the process equally important," he said. "Real combat operations always reveal certain flaws which drills cannot point to. We went through this. We lost aircraft, the arresting wire snapped…. This will be taken into account and improved."

In late December, Russian President Vladimir Putin announced that Moscow would withdraw the majority of its forces from Syria since the operation reached its key goals. The phaseout was launched in early January, with the battlegroup led by the the flagship of the Russian Navy leaving first.