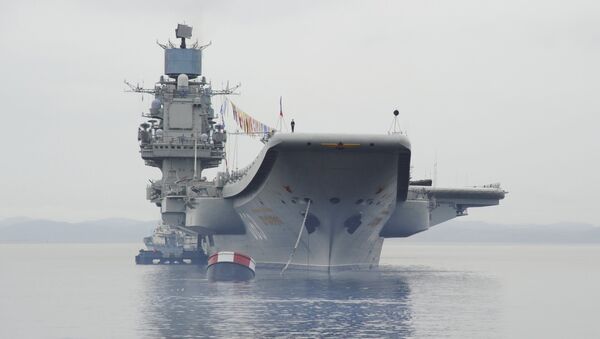 © Sputnik / Sergey Eshenko
/
Go to the photo bank
Subscribe
The combat use of the Admiral Kuznetsov aircraft-carrying missile cruiser off the Syrian coast needs to be thoroughly and competently analyzed, in order to improve the combat readiness of the Russian Navy, according to Adm. Vladimir Valuyev, former Baltic Fleet commander.

The Russian Defense Ministry said Russian Navy Commander Adm. Vladimir Korolev would visit the ship on Thursday to wish the crew a successful mission and hand out awards to distinguished servicemen.

On Wednesday, the Admiral Kuznetsov returned from Syria and entered the Kola Bay near the country’s northern port city of Severomorsk.

"The Northern Fleet accomplished its mission with minimal losses. The Admiral Kuzentsov and the Pyotr Veliky could be attacked, but it didn’t happen. There were no human casualties. Now it is time to draw proper conclusions from the mission. Information from the pilots and the crew should be analyzed and used to improve combat training operations in the navy," Adm. Vladimir Valuyev told Sputnik.

He suggested that in order to assess the results of the military operation in Syria a "scientific and practical conference" should be organized, involving veteran commanders. Their expertise should be further used to contribute to improving naval training programs.

"This is not only my opinion. Many admirals, including former fleet and navy commanders, are analyzing the situation and ready to participate in such discussions. Their experience will help to prevent mistakes in training and the combat use of Russian naval forces," Adm. Valuyev said.

Russian Admiral Kuznetsov Aircraft Carrier Returns Home After Syria Mission
In October 2016, Russia's naval group, including the Admiral Kuznetsov, the Pyotr Veliky battle cruiser, the Severomorsk and the Vice-Admiral Kulakov anti-submarine destroyers, and support vessels, was sent to the Mediterranean. Since the group's arrival to Syria, the air wing based at the Admiral Kuznetsov had participated in Russia's anti-terror operation until January 6.

During their mission to Syria, the warship and supply vessels of the Russian aircraft carrier group travelled nearly 18,000 nautical miles (20,700 miles).