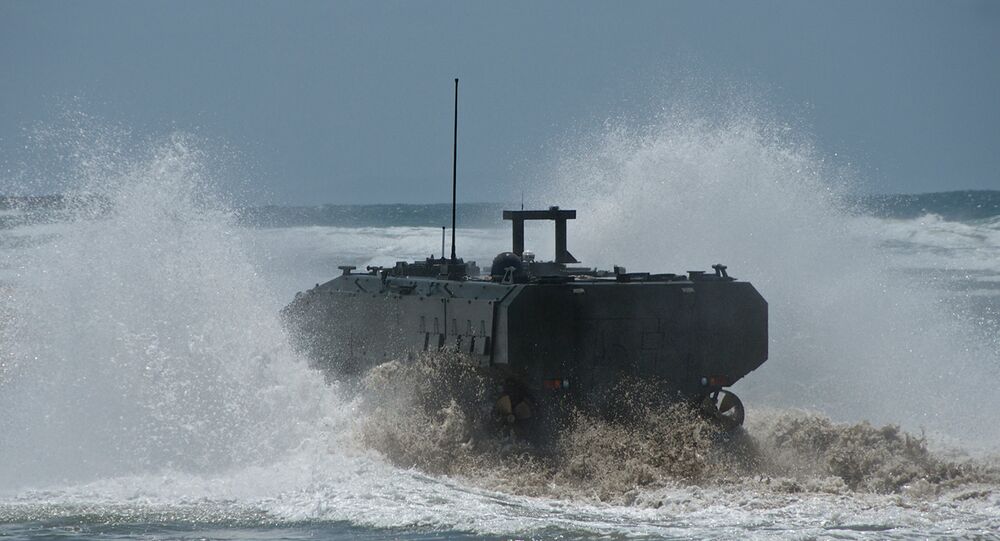 The latest delivery of Amphibious Assault Vehicles 1.1 (AAV) is said to be deadlier and better-protected, but still has "minimal swimming ability."

© AP Photo / Eric Talmadge
US Marine Corp Armored Vehicles Too Heavy For Osprey Rotorcraft
The next fleet of sea-based vehicles can navigate tricky coastal waters, launch more lethal weapons, and initiate faster and safer attacks from "beyond-the-horizon," according to Scout. Nevertheless, the oceangoing vehicles might actually be part of a plan to divide labor during sea missions conducted by the US Marine Corps that require less swimming capabilities.

The AAV "represents a step" in a strategy to reduce swimming requirements for ground vehicles, allowing the Corps to "purchase a vehicle optimized for land warfare without having to accept tradeoffs to provide amphibious capability,"
according to a report published by the Center for Strategic and Budgetary Assessments (CSBA).

The think tank added that "an armored vehicle that can swim ashore from over-the-horizon…has become irrelevant." The logic is that an amphibious warship, able to creep up from a distance of 25 miles, has become obsolete due to advances in enemy threat capabilities. "Modern threats require stand-off of 300 miles or more, far too great a distance for an armored vehicle to swim," authors Bryan Clark and Jesse Sloman wrote in December 2016.

The US Marine Corps expects to add at least 200 of the hybrid vehicles. Kirk Mulls, AAV 1.1 program director, said that it "gives us the ability to operate throughout a range of operations" that were not possible with the earlier version that lacked the survivability upgrade added to the newest fleet. The commander acknowledged concerns reported by CSBA, noting that emerging threats require a new vehicle beyond the scope of the capabilities provided by the recent upgrade.

Other features include stabilized.50-caliber machine gun nests and Mk 19 belt-fed automatic grenade launchers that can be fired from within the protected confines of the vehicle via the Marines’ Common Remotely Operated Weapons System.

According to a Congressional Research Service brief written by Andrew Feickert, a specialist in ground forces, the defense contractor BAE was awarded a $103-million contract in 2015 to deliver 16 prototypes by 2017. The military budget submitted for fiscal year 2017 requested an additional $157.9 million for research, development, testing and evaluation, the brief added.