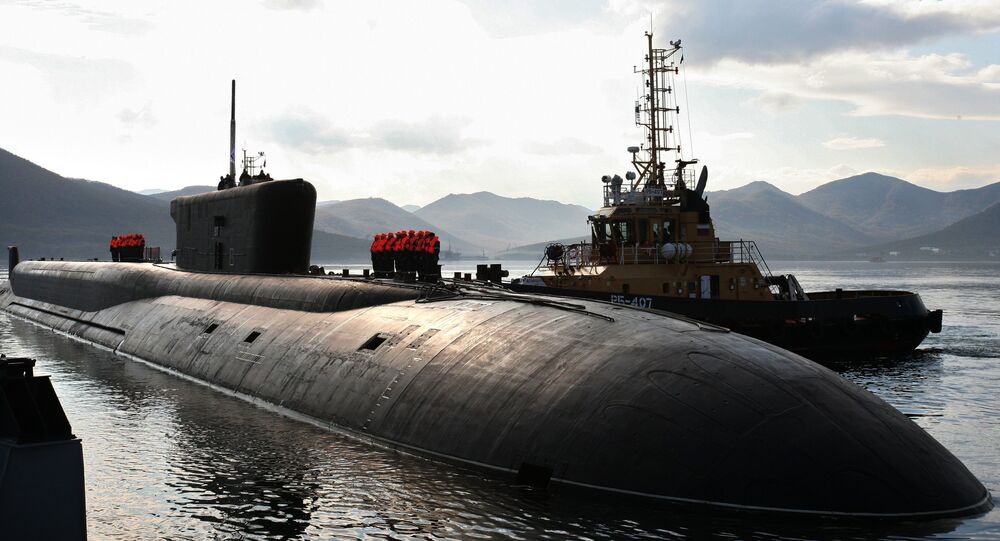 In particular, the president noted: "We did a lot to modernize the nuclear and missile capabilities of the Russian armed forces. This relates to the navy. New strategic submarines with new missiles are entering service."

© AFP 2020 / JANEK SKARZYNSKI
Russia Will Not Be Dragged Into a 'New Arms Race Imposed by US, NATO'
Putin also underscored that Russia was acting in strict accordance with all international commitments, including the New Strategic Arms Reduction Treaty (START).

The same day, the eighth Borei-class (project 955) submarine was laid down at the Sevmash shipyard. The new missile-carrying strategic submarine was named the Knyaz Pozharsky. It is expected to be the last in a series of eight Borei-class submarines for the Russian Navy.

In recent years, Russia has been putting many efforts in building a modern-day nuclear submarine fleet.

In terms of combat power, one Borei-class submarine surpasses a combined arms army.

In January 2013, when the first submarines of this class entered service, at a ceremony President Putin said: "The Yuri Dolgorukiy is a new-generation nuclear-powered submarine. Submarines of this class will be an important component of the Russian strategic forces and will guarantee global power balance and the security of Russia and its allies."

By December 23, another four modernized submarines of Borei-A class were built at the Sevmash shipyard, including the Knyaz Vladimir, the Knyaz Oleg, the Generalissimus Suvorov and the Emperor Alexander III.

Nuclear submarines are the most effective, autonomous and stealthy component of the Russian nuclear triad. They do not depend on weather conditions and can operate hundreds of miles from the Russian coast.

Starting 2020, the Borei-class submarines will be the main naval component in the Russian nuclear strategic deterrence forces. Eight submarines and 16 rotating crews will maintain Russia’s permanent presence and capabilities in different areas of the World Ocean.

A Borei-class missile-carrying nuclear submarine (project 955A, Borei-M) was developed by Rubin design bureau. It has a length of nearly 170 meters, a width of 13.5 meters and a displacement of 24,000 tons. It can carry 16-20 Bulava-30 intercontinental ballistic missiles and several cruise missiles.

The Bulava-30 has a maximum operation range of 8,000 km. It has a solid-fuel engine and a compact design. The sub can reach high speeds and boasts an outstanding maneuverability. It can also override certain advanced missile defense systems.

Borei’s sonar system allows for detecting enemy ships at a distance 50 percent farther than that of Virginia-class submarines of the United States Navy. This system is a complex of digital devices providing communications, acquisition and detection of targets and a range of auxiliary functions.

A Borei-class submarine has a maximum depth of 480 meters. It carries a 90-days food supply for crew. As for its life-support systems, it can operate autonomously for decades. Its crew numbers 107 members.

In comparison with a Borei and Borei-A submarines, the Borei-M (developed in 2011) submarine has increased stealth capabilities and advanced communications and weapons control systems. There is also a modernization plan for the entire Project 955.

Despite hostile rhetoric in Western political circles and mainstream media, Russia proves that its defense industry has the most advanced technologies, including in building submarines. Some of those technologies are unavailable for more economically developed countries.

The West has repeatedly expressed concerns over Russia investing into the newest defense technologies. Business Insider placed Borei-class submarines among the "10 most terrifyingly advanced weapons used by the Russian army."

© Photo : press-service of JSC "PO "Sevmas
Russia to Launch Lead Submarines of Borei-A, Yasen-M Classes in 2017 - Navy
Currently, there are 75 operational submarines of different classes with the Russian Navy. They incorporate the most advanced technologies of the Russia defense industry, including bodies made of special steel alloys and titan for increased stealth capabilities, reliable underwater missile launchers and sophisticated sonar systems.

Russia expects to develop a fifth-generation multipurpose submarine by 2020. Moreover, it was reported that on November 27, Russia tested a nuclear-propelled torpedo capable of firing a 100-megaton thermonuclear charge at a distance of up to 10,000 km.