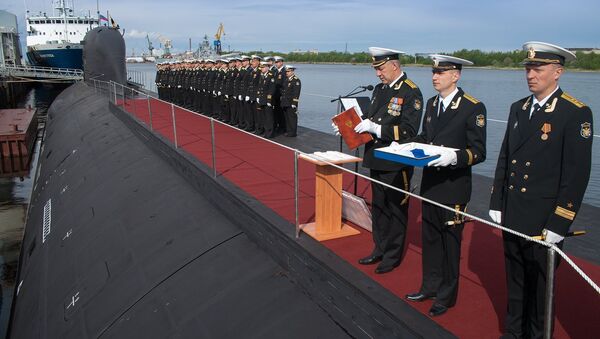 Yasen-class project 885 submarines, designed by St. Petersburg's Malachite mechanical engineering bureau, are Russia's newest class of submarines, while the Borei-class nuclear-powered subs are to become the mainstay of the naval component of the country’s strategic nuclear deterrent.

"Sevmash has always been the pride of the domestic shipbuilding, so the Navy is absolutely confident that those challenging tasks before you — to hand over two submarines a year — you will fulfill," Bursuk said during the keel-laying ceremony for the final Borei-class ballistic missile nuclear submarine.

Furthermore, the Russian Navy decided to halt production of the 955A Borei-class nuclear submarines (NATO reporting name Dolgorukiy class) and to modernize the project, Viktor Bursuk added on Friday.

The Russian Sevmash shipbuilder commenced on Friday production of the eighth 955A Borei-class submarine Knyaz Pozharsky, which will be the last one in the Project 955 series.

"The 955A Borei series is coming to an end with this submarine. Now the navy is working together with the Rubin [design bureau] on modernization of the project," Bursuk said.The Borei-class nuclear-powered subs are to become the mainstay of the naval component of the country’s strategic nuclear deterrent.

By 2020, the Russian Navy also plans to operate a total of eight Borei-class nuclear-powered ballistic-missile submarines.