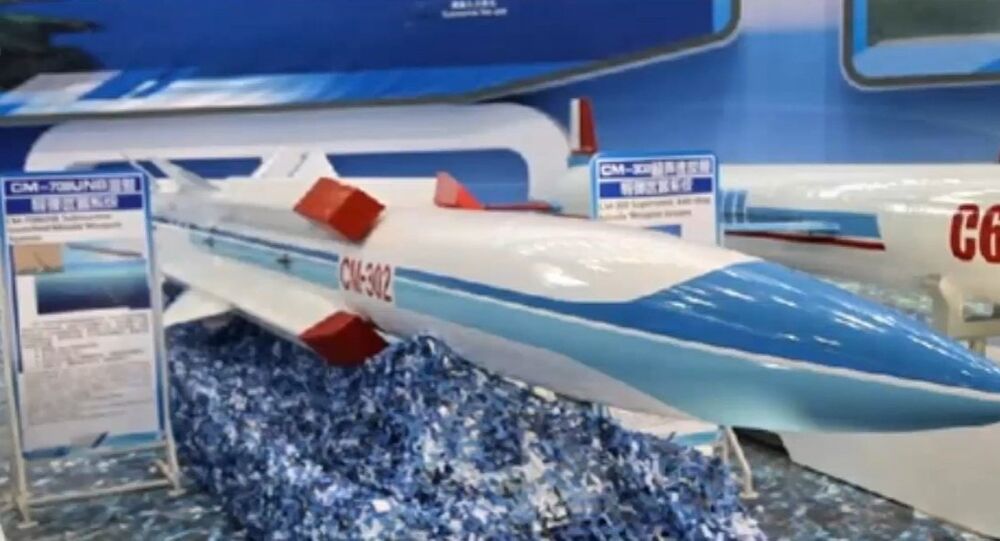 China's new CM-302 supersonic anti-ship cruise missile is a variation on Russia's Yakhont missile, and the development will worry the US as it tries to impose its authority in the Pacific region, military expert Vasiliy Kashin told Sputnik.

According to CASC, the missile system can carry a 250kg warhead and has a range of around 290 km. Traveling faster than the speed of sound, it has an accuracy rate of 90 percent.

There are only two other supersonic anti-ship cruise missiles on the market, Russia's P-800 Onyx (Yakhont) and the joint Russian-Indian BrahMos supersonic missile, for which the P-800 served as the basis for development.

The Yakhont is capable of traveling at up to 2.6 times the speed of sound and has a 300km range. It can carry a warhead weighing up to 200kg, and can be launched from land, sea, air and submarine. The sea-skimming missile is able to fly at altitudes between 5 and 15 meters above sea level, avoiding radar and infrared detection as it approaches its target.

"China has had real success in making supersonic anti-ship missiles, but it shows very modest capability for creating really innovation constructions in this sphere."

"In itself, this approach is not so bad. In some ways, China has already overtaken Western countries, including the US, which has only subsonic missiles. However, Tiawan has begun production of its own Hsiung Feng III supersonic missile."

The CM-302 unveiled at the Zhuhai air show is the export version of the YJ-12 which is in service with the Chinese navy. That, in turn, was developed on the basis of Russia's Kh-31 supersonic anti-ship cruise missile, which was the first to be able to launch from tactical aircraft.

© Sputnik / Evgeny Biyatov
Yakhont anti-ship cruise missile
While China has successfully developed an analogue to the Yakhont, it still lacks a rival to heavier supersonic missiles such as the Russian P-700 Granit, which can carry a 750kg warhead, or the P-1000 Vulkan, which can carry a 1,000kg warhead.

"The P-700 is really a small plane weighing seven tons, which flies towards its target up to 2.5 times the speed of sound. The P-700 has its own radio-electric station and fired missiles exchange information during flight and co-ordinate their attack in order to hit the target simultaneously from different directions."

"These missiles have been repeatedly modernized and are capable of firing at land targets. Such heavy missiles are specifically designed for targeting aircraft carriers and have a range of up to 700km," Kashin said.

Russia continues with the development of its anti-ship missiles, including the Tsirkon hypersonic cruise missile which travels at five times the speed of sound and has a range of 400km. According to sources in the Russian navy, the atomic missile cruisers Admiral Nakhimov and Pyotr Velikiy will be fitted with the new equipment during the course of modernization over the next couple of years.

© Sputnik / Vitaly Ankov
Sentinels of Peace: Crimeans Resting Easy With Bal and Bastion Missiles on Duty
Russia is also extending its co-operation with India, and last month it was reported that the two countries are going to double the range of Brahmos to 600km.

Vasiliy Kashin told Sputnik that China's rapid development of anti-ship cruise missile capability has serious consequences for the South China Sea dispute and the US' ability to defend its interests there.

"China's advances in missile manufacturing will have a serious impact on the military-political situation in the Pacific, in any case. It is a concern for the Americans."