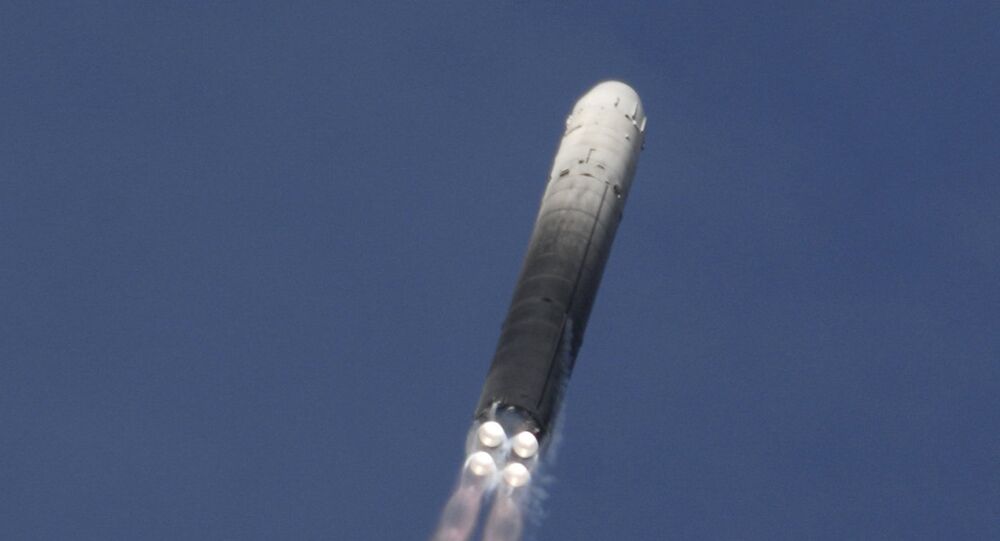 The development of hypersonic weapons in Russia is something that makes US defense officials feel extremely uneasy, according to the American news website Washington Free Beacon.

© Photo : Youtube/Militer Dunia
Russia’s Strategic Bomber PAK DA May Take Off Earlier Than Expected
US defense officials are alarmed that Russia has continued to develop hypersonic weapons while the US has lagged behind, the American news website Washington Free Beacon reported.

The remarks came after a source said that the Russian Strategic Missile Forces had carried out a successful intercontinental ballistic missile (ICBM) launch involving a hypersonic glide vehicle.

The test launch was performed earlier this week using an RS-18A (NATO codename: SS-19 Stiletto) strategic ballistic missile from a missile deployment area in the Orenburg Region in the country's east.

"Russia conducted a flight test of a revolutionary hypersonic glide vehicle that will deliver nuclear or conventional warheads through advanced missile defenses," the Washington Free Beacon quoted US military officials as saying.

Recalling that this was the second such test in Russia, the Washington Free Beacon quoted Pentagon spokeswoman Lt. Col. Michelle Baldanza as saying that "the Department of Defense has nothing to offer on this."

While China successfully conducted six tests of its DF-ZF hypersonic glider, "a US Army hypersonic missile blew up shortly after launch in August 2014," according to the Washington Free Beacon.

"Hypersonic missiles are being developed to defeat increasingly sophisticated missile defenses. The weapons are designed for use in rapid, long-range strikes," the website said.

It also cited Russian Deputy Prime Minister Dmitri Rogozin as saying that hypersonic weapons are of paramount importance and that "whoever is first to achieve" more progress in their development would "overturn the principles" of how wars are waged.

Additionally, the Washington Free Beacon referred to Rep. Mike Rogers, Chairman of the Subcommittee on Strategic Forces, who voiced concern about the matter.

"I'm troubled that Russia and China continue to outpace the US in the development of these prompt global strike capabilities," he said.

He was echoed by former Pentagon strategic forces policymaker Mark Schneider, who said that the US hypersonic weapons program compares poorly to the Russian one in terms of scale and technological characteristics.

© Photo : Youtube/Sputnik
Bull's Eye! Russian Iskander-M Missile Put to Test During Drills
He also quoted Russian state media as saying that a hypersonic cruise missile is now being developed for Russian naval vessels, such as the fifth generation Husky missile submarine, which has yet to be constructed.

The Russian hypersonic anti-ship missile Tsirkon is due to enter service already by 2018, Rogers said, adding that the yet-to-be-completed Russian next-generation stealth bomber PAK DA will also be armed with air-launched hypersonic missiles.

According to the Washington Free Beacon, hypersonic speed ranges between Mach 5 and Mach 10, or 3,836 miles per hour to 7,673 miles per hour, something that will certainly pose a serious challenge for arms manufacturers.