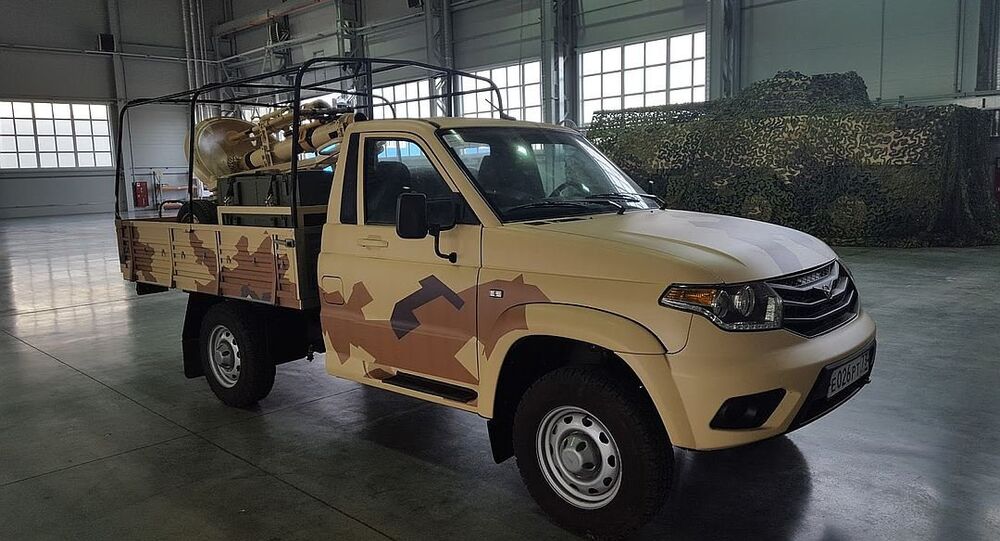 The Russian anti-terrorist operation in Syria is about to get more 'patriotic'. On Friday, the Defense Ministry confirmed that it has deployed a group of UAZ Patriot pickups equipped with Kord 12.7 mm heavy machine guns and AGS-17 grenade launchers to the war-torn country. The vehicles are likely to be assigned to protect humanitarian convoys.

Citing a source in the Defense Ministry, Komsomolskaya Pravda reported that a party of the light vehicles has been sent over to Syria.

The firepower in the back of the vehicles will enable their operators to suppress enemy fire in a radius of up to 2 km. The weapons can be mounted aboard a rotary turret, allowing the user to instantaneously change his arc of fire.

Additionally, if needed, the vehicle can be equipped with Konkurs or Kornet anti-tank missiles, capable of hitting enemy targets at distances of up to 5 km. It can also be fitted with with a 120 mm mortar with an effective range of 9 km.

© Sputnik / Oleg Lastochkin
It's Time: Admiral Kuznetsov Carrier Group Heads to Mediterranean to Kick Daesh Ass
The new military-use UAZ Patriots were first demonstrated to President Putin this spring. In the summer, they were shown at a closed pavilion for specialists at the Army-2016 Military-Technical Forum. The gas-powered vehicles feature upgraded all-terrain capabilities, a one ton carrying capacity, and armor protection. They also feature power plugs for night vision, special tents for protection against shrapnel, and storage for ammunition.

Experts suggest the new vehicles may replace or complement the UAZ-3132 Gusar, already engaged in Syria and used for operations by Russian special forces.

Military analyst Igor Korotchenko told Komsomolskaya Pravda that the pickups will enable users "to engage in agile urban combat, attack and pursue the enemy in the desert, cover humanitarian convoys, which are regularly shelled, on the roads of Syria, and deliver ammunition to friendly checkpoints."

In 2014, soon after Daesh made itself globally known by capturing large swathes of Syria and Iraq, world media reported on the terrorist group's successful use of large numbers of Toyota pickup trucks for their operations. Now, finally, the terrorists seem to have met their match.