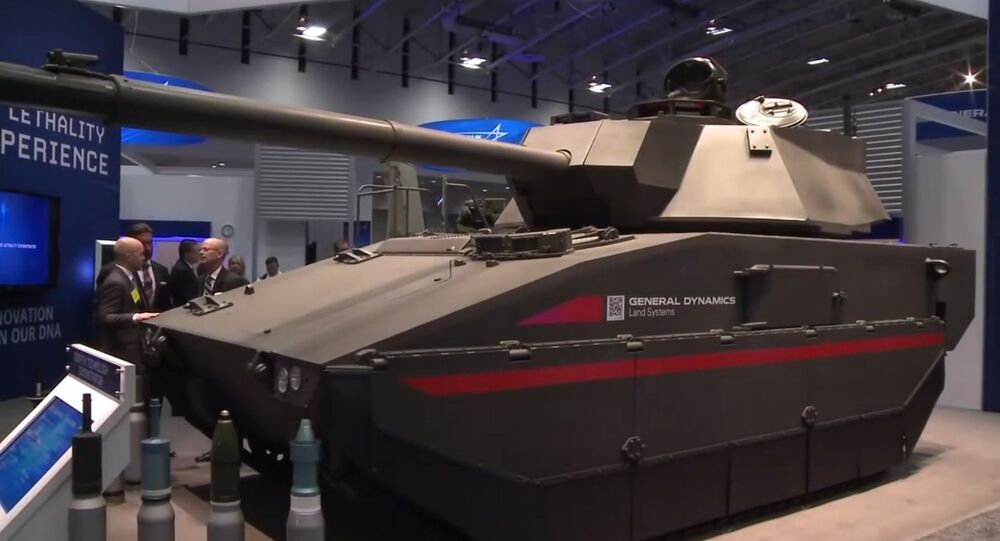 On October 3, General Dynamics unveiled its Griffin concept battle vehicle designed to fulfill a United States Army request for a new light tank. The Griffin Technology Demonstrator was presented at the annual Association of the US Army conference.

© REUTERS / David Mdzinarishvili
Pentagon Has No Money to Build Next-Gen Tank Rivaling Russian Armata
Earlier this year, the US Army said it needed a new combat vehicle it was calling the Mobile Protected Firepower, according to Popular Mechanics. The MPF is expected to give a boost to US light infantry divisions, especially against lighter armored vehicles such as the new Russian Kurganets infantry fighting vehicle.

One of the main advantages of the new US tank is that it weighs only 28 tons, which allows for transporting the new vehicle by plane. Experts noted that a Boeing C-17 Globemaster III cargo plane could carry two Griffin tanks at a time.

The concept is based on the hull of the British Army’s Ajax scout vehicle which is also produced by General Dynamics. The tank is armed with the XM360 120-mm gun which delivers the same firepower as an M1 Abrams.

The gun was initially designed for the Army’s Future Combat System, an effort to develop lighter and more rapidly deployable replacements for the M1 Abrams tank. However, then the $160 million program was closed.

The Americans are re-writing their concept of the main battle tank, said Konstantin Sivkov, a member of the Russian Academy of Artillery Sciences.

"The M1 Abrams was part of the conception to fight against Soviet-made attack armored forces. This is why it is very heavy (some 70 tons) and has a reinforced front armor plate. This makes the tank much less maneuverable than Russian tanks," Sivkov told Sputnik Radio.

© AFP 2021 / VASILY MAXIMOV
Tank Top: Russia, China Make World's Only 'Fundamentally New' Armored Vehicles
Special measures are needed to move the Abrams across water obstacles. In particular, only 70 percent of bridges in Western Europe can withstand weights of up to 50 tons. Unlike the Russian T-90 and T-72 tanks, the M1 Abrams cannot cross many of these.

"This is why the US decided to build a new light tank," the expert said.

However, according to Sivkov, the Griffin will not be able to hold a candle to Russian armored vehicles.

"Taking into account the US Army’s requirements for comfortableness of the tank’s cabin, such a compact vehicle cannot be well-armored. It was reported that its gun will deliver the same firepower that of an Abrams, but the Abrams is already outgunned by the Russian T-90 tank, not to speak of the newest T-14 Armata. This is why the new American tank will be seriously outperformed by Russian armored vehicles," the expert pointed out.

Sivkov suggested that the new tanks will be something in between a main battle tank and a scout tank.

"It will be a fast-moving vehicle. It is likely to be powered by a diesel engine because the Abrams’ gas-turbine engine doesn’t always perform well. Of course, the Griffin will be equipped with the most advanced information and control system. Possibly, the tank would be able to fire anti-tank missiles from its 120mm gun," Sivkov said.