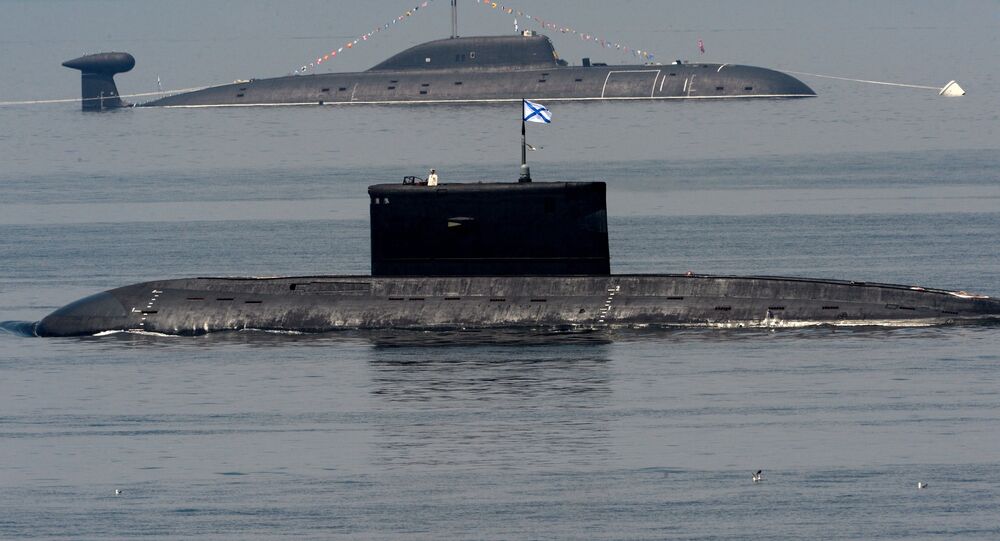 The United States has enjoyed unparalleled naval supremacy for more than two decades, but the most advanced submarine in Russia's arsenal, known as Severodvinsk, has recently emerged as a formidable opponent to the Pentagon's cutting-edge subs, dubbed Virginia, defense and national security writer Kyle Mizokami asserted.

"Both submarines are the pinnacle of their country's submarine technology and, pitted against one another, would be fairly well matched," he wrote for the National Interest. The analyst also described Severodvinsk as "an unusual challenge to US naval superiority, but nevertheless one with a long, lethal pedigree."

press-service of JSC PO Sevmash
Russian Subs to Don New Generation Noise Absorbing Tiles
The 394-foot-long boat is capable of moving at a maximum speed of 40 miles per hour submerged. The Severodvinsk is armed with up to 32 P-800 Oniks supersonic anti-ship cruise missiles, 40 Kalibr-PL anti-ship, anti-submarine and land attack submarine launched weapons or an unspecified number of Kh-101 cruise missiles.

The expert maintained that the Virginia class has an edge over the Severodvinsk.

"The Virginia class is quieter and has a better sonar rig than its Russian opponent. In the world of submarine warfare, that's an unbeatable combination. It can move and detect in ways that would give away Severodvinsk. One thing to be said for Severodvinsk is that it is more capable of quickly responding to a sudden target opportunity via her supersonic Klub ASW missiles," he explained.

Designed to replace the Akula-class subs, the Yasen class is expected to become the backbone of the Russian Navy.

© Photo : press-service of JSC "PO "Sevmas
Russian Yasen-Class Nuclear Submarines to Be Ready by 2023 – Russian Navy
Severodvinsk, the first Yasen-class sub, entered service in June 2014 and was assigned to Russia's Northern Fleet. The second Yasen-class submarine, dubbed Kazan, will be the first watercraft of the improved Project 885. It is expected to be ready by early 2017 and will be reportedly handed over to the Russian Defense Ministry in 2018.

Four more Yasen-class subs are currently under construction, with the sixth Project 885 watercraft, called Perm, laid down in late July. A total of six updated Yasen-class submarines are due to join the Russian Navy by 2020.