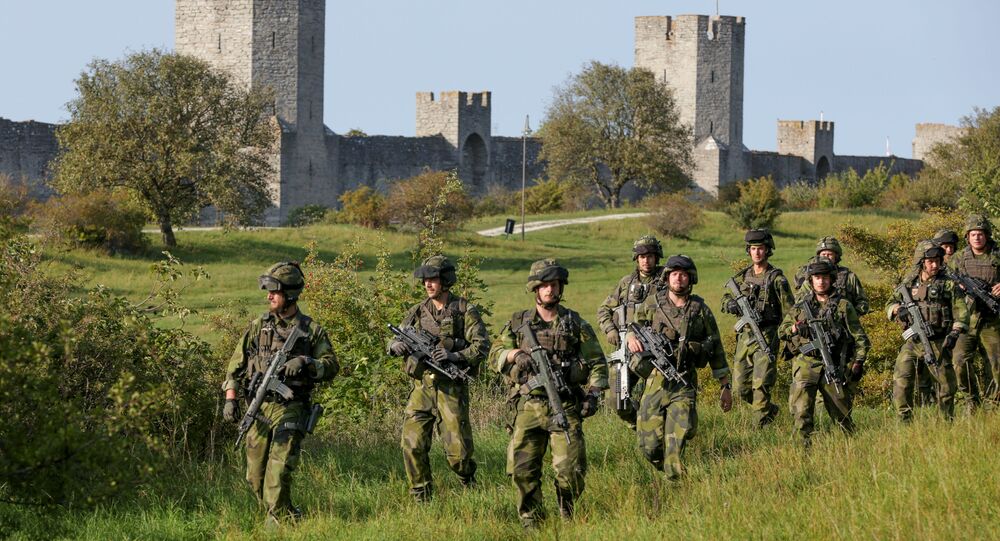 Sweden's somewhat paranoid fears of a Russian attack are legendary. Of late, Stockholm has stepped up its rhetoric against Moscow and is preparing for a full-scale war amid the rearmament of the island of Gotland. Recently, various scenarios for the potential Russian invasion have been in a report by the Royal Academy of Military Sciences.

© CC BY 2.0 / Håkan Dahlström / Swedish soldiers
Sweden Keeps Eyes Peeled for Russian 'Spies'
The report, which focuses on Russia's hostile takeover of Gotland, was penned by eight experts and edited by military expert Karlis Neretnieks, who was the commander of the Gotland military brigade in 1992-1995.

"Without artillery and air defense systems, it is impossible to prevent the capture of the island. It is only possible keep fighting for some time and keep individual objects in possession while waiting for reinforcements," Neretnieks said, as quoted by the Swedish tabloid newspaper Expressen.

According to one of the scenarios viewed in the report, no fewer than 2,500 Russian soldiers may land on Gotland, after which the Baltic island may never be reclaimed. Russia may start with sending some 60 commandos in disguise under the pretest of repairing the Russian gas pipeline Nord Stream, whereupon two full battalions, packing a total of 2,000 servicemen, 20 tanks and the latest air defense systems may land on Gotland. Another 500 soldiers would be airdropped shortly afterwards.

© Flickr / *Psycho Delia*
Paranoid Sweden Circles the Wagons Despite 'No Russian Threat'
Retired lieutenant colonel Jörgen Elfving agreed that Gotland may be seized on one day, even without the use of special forces. The Island may be hit from the air or by a combined operation of the Russian Air Force and Marine Corps. In this case, the deadly blow would be dealt by the 76th Airborne Division, stationed in Pskov near the Estonian border, and the 336th Marine Brigade, stationed in the town of Baltiysk in the Kaliningrad region.

According to the report, would place intelligence resources and air defense systems to counter possible threats from Sweden.

"If they succeed with placing advanced anti-aircraft systems on Gotland, the whole Baltic Sea will, in principle, turn into a Russian inland sea. Today, Russian S-400s are located in Kaliningrad Region. If they are moved to Gotland, they will cover a large part of southern Sweden and the whole Øresund region. The enemy will be extremely difficult to operate in the air," Jörgen Elfving said.

© Flickr / Ricardo Feinstein
Got Land? Gov't Report Advises Sweden to Join NATO to Keep Russia From 'Borrowing' Island
Elfving brushed aside former Swedish Foreign Minister Carl Bildt's assurances that Gotland may be protected through constant control over the approaches to the island.

"Our air and naval forces are limited. We need a modern air defense system. As for Air Forces, are they hardy enough and can they maintain the defense for a given period of time? Besides, our Navy does not have enough anti-aircraft installations, and their endurance is limited," Elfving said.

However, Defense expert Peter Mattsson doubted that Russia needed Gotland at all.

"It all depends on their goals, but it would be incredibly expensive. <…> No doubt, Russia has the military capability to cut off Gotland and this would be enough. Physical control of the island is not required. Invaders could control Gotland without being present," Mattsson said.

According to lieutenant colonel Håkan Edström, the fixation on Gotland is a "big mistake." "Given how little military resources we have, we have to play each card with utmost care," Edström said. "Maybe we are all useful idiots staring at Gotland, because that's what Russia wants us to do," he said.

© Flickr / Bernt Rostad
All Bark, No Bite: Troops Without Shooting Permission 'Bolster' Gotland Defense
Previously, Sweden was indicated as "most likely" to be drawn into a potential Russian-Baltic conflict in a government report led by security expert Krister Bringéus. On September 14, the Supreme Commander of the Swedish Armed Forces, Micael Bydén, ordered 150 soldiers of the Skaraborg regiment to stay on Gotland to ensure a permanent military presence, citing possible Russian aggression.

According to defense expert Stig-Björn Ljunggren of the Social Democratic Party, the media's repeated description of Vladimir Putin's "aggression" is exaggerated.

"There has always been a healthy fear of the Russians, especially in northern Sweden, but some make things too easy by portraying Putin as a mad dictator, Ljunggren said, as quoted by Swedish Newspaper Norrländska Socialdemokraten.

According to him, Sweden is preparing for war, and the discussion about the reintroduction of compulsory military service is a result of the larger focus on the armed forces.