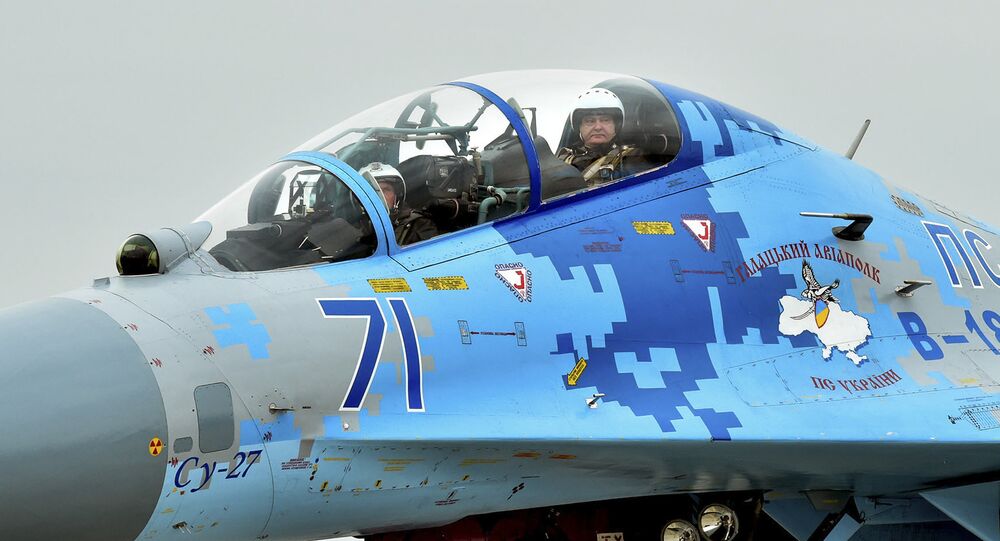 © AFP 2021 / SERGEI SUPINSKY
Why Ukraine's New Tactical Missile is Little More Than Flying Hunk of Metal
During a visit to the southeastern Ukrainian region of Zaporizhya earlier this month, President Poroshenko said that he was confident that "by using the potential of our defense enterprises and the capabilities of our construction and production facilities, in the near future we will be able to create a new, domestic modern engine for Ukrainian fighter aircraft."

At the same time, speaking at the Zaporozhye-based Ivchenko-Progress Machine-Building Design Bureau, the president said that Ukraine is one of only a handful countries in the world that is capable of creating entirely domestically-produced aircraft. "Only five countries in the world have the opportunity to create an aircraft based fully on their own production. Ukraine is among the five most developed and high-tech countries [in this regard]," Poroshenko noted.

According to Ukrainian media, Ivchenko-Progress has presented the president with a project on the construction of a 'totally new' two-person multirole fighter jet, classified the 'LBL', deciphered into English as the 'Light Fighter Aircraft'.

The new plane, Ukrainian economic news portal Ekonomicheskie Izvestia notes, 'looks similar' to the Soviet-era MiG-29, while its combat characteristics plan to match the JAS 39 Gripen, the Russian MiG-35 and the Chinese FC-1 Xiaolong. At the moment, the 'new' plane remains at the conceptual design stage.

Commenting on the development in an analysis for Russia's Svobodnaya Pressa online newspaper, defense analyst Vladimir Tuchkov suggested that the news was both amusing and frightening, because it indicates that "Ukrainian ideologues consider the Ukrainian people for fools who can be peddled any nonsense."

Ministry of defence of the Russian Federation
Russian Missiles' Global Reach: Does Moscow Really Need Military Bases Abroad?
There are several reasons for this, Tuchkov explained, not least of all the fact that Ivchenko-Progress "had never, not even in its golden age, been involved in the development of not just fighters, but of aircraft of any type."

"Of course, it was hinted to the president [that the new plane] 'looks similar to the MiG-29', and that the Russian fighter jet, which first flew in October 1977, would be fitted with the latest 'Progress' engines, resulting in a 'new fighter'."

In fact, the military analyst recalled, the Ivchenko-Progress Design Bureau "has, since its creation in 1945, been involved in the development of aircraft engines." However, their main experience has been in the creation of engines for passenger airliners, as well as the military transport giants Ruslan and Mriya.

"This results in some curious arithmetic. The MiG-29's weight without engines is 8 tons. If you attach two D-18T Ruslan engines, this adds another 8.2 tons. If two D-18T engines are put side by side, this will come out to a lateral distance of 4.6 meters. With its wing-span of 11 meters, an interesting beast emerges from the MiG, a typical 'Cheburashka'," (the famed big-eared character from the Soviet children's classic).

"As for avionics, Ukrainskie natsionalniye novosti reports that they would be partly Western, and partly Ukrainian created." This, the defense analyst notes, relates to the fact that the Kiev-based Kvantum scientific research institute is simply incapable of creating a modern on-board radar system in its present dilapidated condition.

Moreover, "as far as the supply of Western avionics is concerned, this too is in the realm of science fiction, because nobody is going to supply such advanced weapons to a country that is so unstable and unpredictable. And a fighter's avionics is one of the main components of such weapons."

"Secondly, and most importantly: this fable about a 'new Ukrainian multirole fighter' is not taken seriously by anyone in the West. They understand perfectly well that neither the 'muzzled' design ideas, nor the country's growingly decrepit industry, nor the leaky Ukrainian economy is capable of shouldering such a project."

Today, Tuchkov laments, "things have reached a point where the once powerful Antonov Design Bureau, which created some of the best transport aircraft in the world, has begun seeing the occurrence of some previously unimaginable failures."

© Sputnik / Mikhail Voskresenskiy
Saudi Arabia Buys 30 Ukrainian Planes Named After Notorious Nazi Puppet
"So, for example, the design of the short-range An-178 transport aircraft includes miscalculations in the plane's balance. As a result, the aircraft was sent to the Le Bourget airshow, and then to an exhibition in Dubai, with ballast weight totaling 1.32 tons, featuring 15 steel plates arranged directly behind the cockpit. Upon arrival at the shows, the plates were secretly removed, so as not to produce a bad impression on potential buyers."

"It can safely be said that the error occurred as a result of the lack of coordination between various departments, and the lack of unity of management at the design bureau. When the fuselage was designed, approved and prepared for production, it was decided to expand the wings by two meters and to increase their total area by 12%."

Furthermore, the defense analyst noted, at the moment, "Ukraine does not have the money even to keep and maintain its modern fighters. Shortly after the coup, the strong Ukrainian diaspora living in Canada pushed through a decision in Canada's government on the donation of several decommissioned McDonnell Douglas F/A-18 Hornets to Ukraine…However, Kiev refused this generous gift, saying it had no money to operate these machines."

Ultimately, Tuchkov emphasized, these issues "have not prevented Poroshenko and his team from demonstrably puffing out their cheeks and making declarations, each more absurd than the last," from plans to create a Ukrainian missile shield, to talk of joining a non-existent NATO Black Sea Flotilla.

In March, the government dismissed Yuzhnoye Design Office director Alexander Degtyarev, who worked at the rocket-building enterprise since 1975, resulting in protests among workers.

And in the case of the fleet, "its condition is extremely depressing. During a [2014] naval parade in Odessa, the missile boat Pryluky suddenly began listing and rapidly sinking. A sailor onboard the ship began signaling to shore using flags, while on shore the signals were interpreted by the announcer as signals of patriotic feelings and love for the motherland…Luckily, everything ended well, and the ship did not sink."