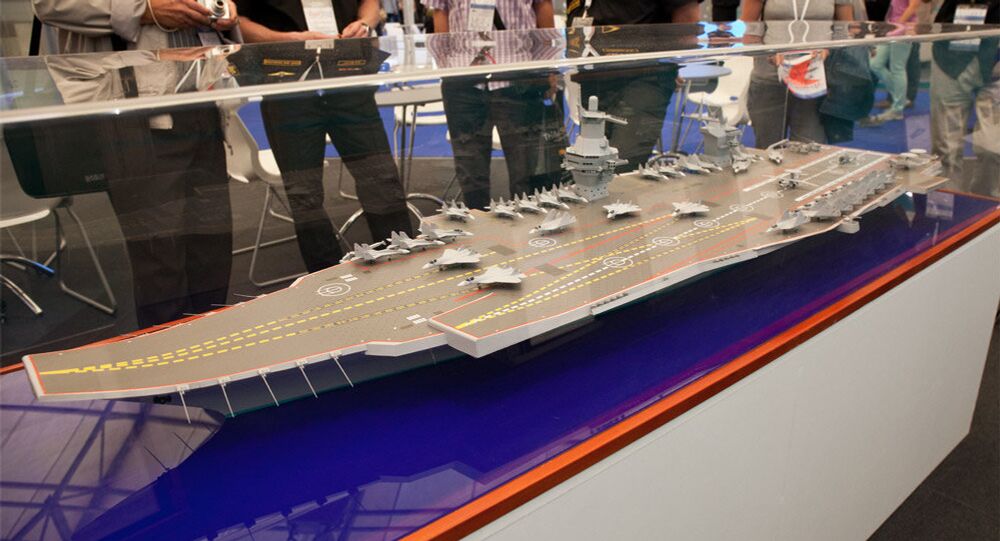 © Sputnik / Sergey Berezin
New Russian Super Aircraft Carrier ‘Storm’ to Reform Russian Navy
The article, published in the Russian edition of the official organ of China's Communist Party, which is said to provide direct information on the policies and viewpoints of the Chinese government, states that the prospective supercarrier was shown off at the Army 2015 military expo in Kubinka outside Moscow last month.

People's Daily notes that the Russian Navy's scientific-technical departments, Russian research institutes and the defense industry as a whole united their efforts toward creating the new supercarrier design.

The paper notes that designers took account of Soviet experience in designing the Admiral Kuznetsov, while accounting for the technical and scientific progress made by Russian designers since then, and an analysis of the next generation of Western aircraft carriers, resulting in a project which "possesses a continuity of design, originality, as well as features which are discernably Russian."

"Sevmash"
Russia's Cutting Edge Submarine Fleet to Receive 'Aircraft Carrier Killer'
The newspaper takes note of four peculiarities of the 'Storm' design. To begin with, it points to the supercarrier's multifunctional character as an "airport at sea," which is a step away from Soviet-era carrier designs, whose anti-submarine, anti-ship and air defense focus effectively made them aircraft carrying cruisers instead of full-on aircraft carriers. The 330 meter-long, 40-meter wide 23000E, with a draught of 11-meters, is designed to be capable of carrying 80-90 aircraft, including the new T-50 PAKFA, as opposed to the Kuznetsov's 41-52 fixed and rotary wing aircraft.

Secondly, People's Daily points out the aeronautics capabilities' focus of the design. "For example, the maximum width of the flight deck exceeds 80 meters; the design includes a double deck composition taken from British designs, along with plans for the creation of a smooth flight deck." Here too, according to the paper, the 'Storm' shows "Russian scientists' innovative ability to use their country's [design] inheritance and to borrow from past experience."

Thirdly, the paper notes that the hull design of the new carrier is designed in such a way as to reduce drag resistance by 20 percent, allowing the ship to sail faster (up to 30 knots) while reducing fuel consumption and increasing the carrier's independent seafaring ability (up to 120 days).

Finally, the newspaper makes note of the design's ability to carry early warning aircraft onboard, another innovation for Russian carrier design.

© Sputnik / Oleg Lastochkin
Russian Navy to Build New Aircraft Carrier After 2025 - Military Source
The People's Daily article concludes with a note of guarded optimism, stating that there are still many questions yet to be resolved with regard to the future of the 'Storm', including technical and design questions (such as whether the ship will receive gas turbine or nuclear powered engines) and financial concerns. Citing Russian media and accounting for construction time, the article's author believes that from further design to construction to commissioning, the new Russian carrier is unlikely to emerge before the year 2030.
...
Reddit
Google+
Blogger
Pinterest
StumbleUpon
Telegram
WhatsApp
11016