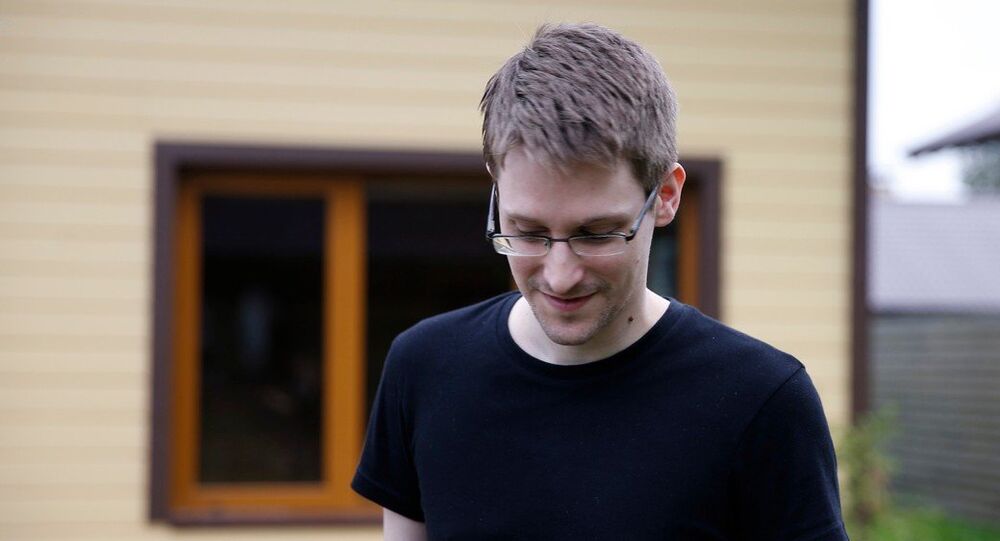 Snowden’s Lawyer: 'I Don't Hesitate to Say He's a Hero'

Crowds gathered Thursday at the University of the District of Columbia law school for a lecture given by Ben Wizner, director of the American Civil Liberties Union’s Speech, Privacy, and Technology Project. Wizner also represents NSA contractor-turned-whistleblower Edward Snowden.

He began the evening discussing how he never intended to work with the ACLU, as when he was in law school, he never dreamed the abuses he's currently fighting would be happening in the United States.

"…and then 9-11 happened and Cheney was the president for 8 years and our civil liberties became very important again," he stated.

He discussed how he took on the case of a German citizen, Khaled El-Masri, who was mistakenly handed over to the CIA after a mix up regarding his name.

“If you ask someone ‘what rights should terrorists have?’ most people would say none, but if you present a mistake that was made [regarding] a clearly innocent man, then the conversation can be different.”

Wizner also discussed the case of Jose Padilla, an American citizen arrested at Chicago’s O’Hare International Airport, who was taken into custody and held as a material witness after the September 11 attacks.

Upon realizing that there was no evidence to hold him, Wizner said, the authorities transferred Padilla to military prison as an “enemy combatant,” where he was tortured until he was nearly catatonic.

“The court today held that Donald Rumsfeld is above the law and Jose Padilla is beneath it. But if the law does not protect Jose Padilla, it protects none of us, and the executive branch can simply label citizens enemies of the state and strip them of all rights — including the absolute right not to be tortured. If Jose Padilla is not allowed his day in court, nothing will prevent future administrations from engaging in similar abuses,” Wizner said it a statement regarding the case after the judge ruled in the government’s favor.

Wizner became involved with Edward Snowden after Laura Poitras contacted him, unsure whether Snowden’s emails to her were legitimate, thinking perhaps she was being set up.  He had been loosely involved up to the point when Snowden became trapped in the airport and Glenn Greenwald approached him and said “here, you do it.”

"I didn't know his name until you did," he said speaking of the former NSA contractor.

The ACLU had attempted to challenge the NSA in court prior to Snowden’s revelations, yet the government continuously ruled that the ACLU had no standing.  Lawyers for the government would argue that that ACLU objections to the metadata program were entirely speculative.

Youtube/animalnewyork
No Prophet in His Own Land: Snowden Loved Overseas, Unappreciated at Home

Familiar with the challenges the ACLU was facing, Wizner explained his first conversation with Snowden, beginning with Snowden asking him, "Do you have standing now?"

The ACLU was, in fact, a Verizon customer, so Snowden’s disclosures allowed them, after ten years, to finally challenge the surveillance issues in federal court, Wizner explained.

When asked whether he believed Snowden to be a hero or a traitor, Wizner made no attempt at hiding his feelings.

"Snowden hates the question ‘hero or traitor,’” He said, but “I don't hesitate to say he's a hero.”

He noted that Snowden is not a revolutionary who set out to destroy the system, but that he simply wanted the legal system to do its job, and believed that the way to do that was through respected media outlets disclosing what they believed to be important information for the public to know.

“Many critics say we have officials who are elected to make these decisions,” one audience member asked, referring to the choice Snowden made in releasing the data. “Why shouldn’t we defer to them?”

Wizner responded with various human rights issues the public would never have known about, had elected officials been left with the decision. He brought up the torture of prisoners at Abu Ghraib, targeted killing drone strikes, and “the Iraq war being total bulls*t,” among other examples.

"I don't think the president gets to tell me what information I get to judge him or hold him accountable," Wizner asserted, with clear agreement from many members of the audience.

“The number of documents he gave to the public was zero.”

Snowden was a reluctant actor, Wizner said, and waited a long time before doing what he did, to see whether the system could self-correct.

"Keep in mind he did all this with no advice, no lawyers or journalists, because he didn't want to implicate anyone else. I know that's pretty heroic."

Wizner described Snowden as brilliant, warm, funny, and self deprecating, adding that he hates being in the spotlight, but that he knows the importance of keeping the public’s conversation about privacy going.  He explained that Snowden is eager to be out of the public eye and back to what he does best — coding — explaining that he wants to write code for free software.

Wizner also spent some time explaining the massive importance of section 215 of the Patriot Act, the portion that allows the NSA’s mass surveillance. It is set to expire on June 1, but Senate Majority Leader Mitch McConnell is aggressively trying to extend it until 2020.

© Flickr / gageskidmore
US Congress Wants to Extend NSA Spying Until 2020

Wizner stated that this was a call to arms, and that the ACLU’s position on section 215 is “end it, don’t mend it.” He said the government has abused its authority for 14 years now, and is largely still unwilling to talk about reform.

A member of the audience lamented: “when you watch everyone, you watch no one.”

Wizner agreed, saying mass surveillance in fact leads to increasing the size of the haystack while looking for the needle.

“I think a lot of it was that they were building capability because they could,” he said, “but I don't think they've thought their way through what they're going to do with all of it. I'm sure they're doing neat stuff, some of which we would approve of, and some really scary stuff.”

Most Millennials Have Positive Opinion of Snowden – ACLU Poll