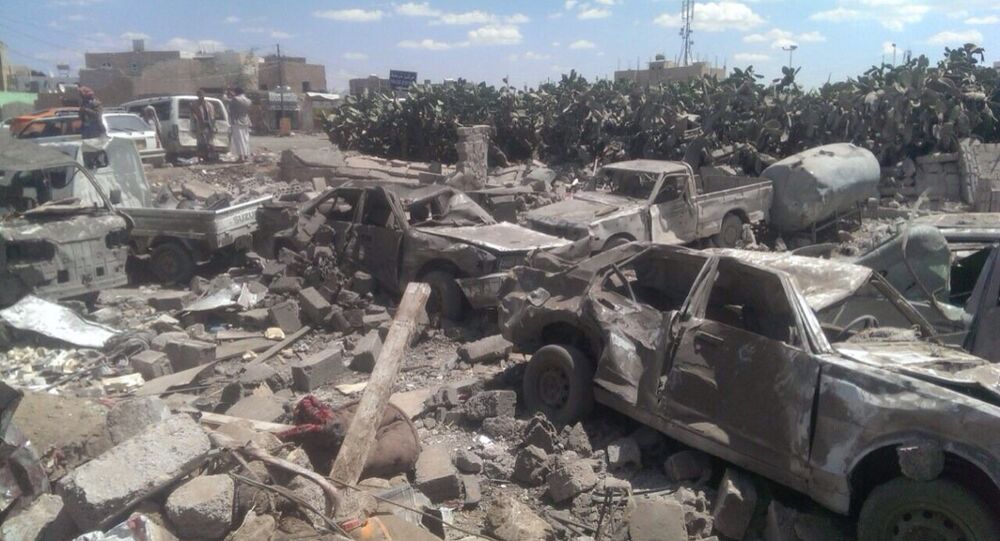 As Saudi Arabia, joined by other countries, launched offensive against Houthi militants in Yemen, Sputnik provides the highlights of three international military operations in the Middle East since 1990: Inherent Resolve, Shock and Awe, and Desert Storm.

© AP Photo / Hani Mohammed
Yemeni Capital Sanaa After Airstrikes
11
MOSCOW (Sputnik) — On March 25, 2015, Saudi Arabia and other Persian Gulf countries launched a military operation in Yemen, after the Cooperation Council for the Arab States of the Gulf issued a statement saying that Saudi Arabia, Kuwait, Bahrain, the United Arab Emirates and Qatar would meet the request of Yemeni President Abd Rabbuh Mansur Hadi to defend his government from Houthi militants.

In March 2015, Houthi militants, already in control of capital Sanaa, established control over Taiz, the third-largest Yemeni city, and the local airport.

The United States and their allies have been conducting airstrikes targeting the positions of the Islamic State, which is currently in control of large parts of Iraq and Syria, since August 2014.

The US-led military operation was only given its current codename Inherent Resolve in October, 2104.

More than 60 countries have joined the United States in the operation to eliminate ISIL, according to the US State Department.

The military operation involving the US Armed Forces and those of the international coalition was conducted against Iraq from March 20 until May 1, 2003, and was not authorized by the United Nations and has been judged as arguably illegal by members of the US Congress.

The invasion was officially justified by the then Iraqi President Saddam Hussein's alleged ties with international terrorism, as well as disputed CIA reports claiming Iraq had stockpiled weapons of mass destruction. All of these claims were later refuted.

© AFP 2020 / FAYEZ NURELDINE
Saudi-Led Coalition Resumes Airstrikes on Yemeni Capital
The United States and the United Kingdom accounted for 98 percent of the invasion force. According to the United States, 45 countries approved of the decision to use military force against Iraq, and 32 countries provided military contingents.

Military violence in Iraq continued long after the operation ended. The defeat of Iraq's armed forces and the overthrow of Saddam Hussein triggered a protracted conflict, with repercussions felt to this day.

© AP Photo / Hani Mohammed
Who Are Yemen's Houthi Rebels: History and Facts
In 1991 the US Armed Forces and coalition forces conducted Operation Desert Storm against Iraq after its occupation of Kuwait in August 1990.

The operation was launched on January 17, 1991 in line with a UN Security Council resolution authorizing member states to use all necessary means to uphold and implement Resolution 660 (1990). Apart from the United States, the United Kingdom, France and Australia, the anti-Iraqi coalition included Syria, Egypt and Saudi Arabia, as well as Eastern European countries. The Soviet Union did not join the coalition.

On January 17, coalition forces launched airstrikes against targets in Iraq and Kuwait. Allied ground operations commenced on February 24, 1991, taking four days to liberate Kuwait. Hostilities ended on February 28, and a ceasefire agreement was signed on March 6.