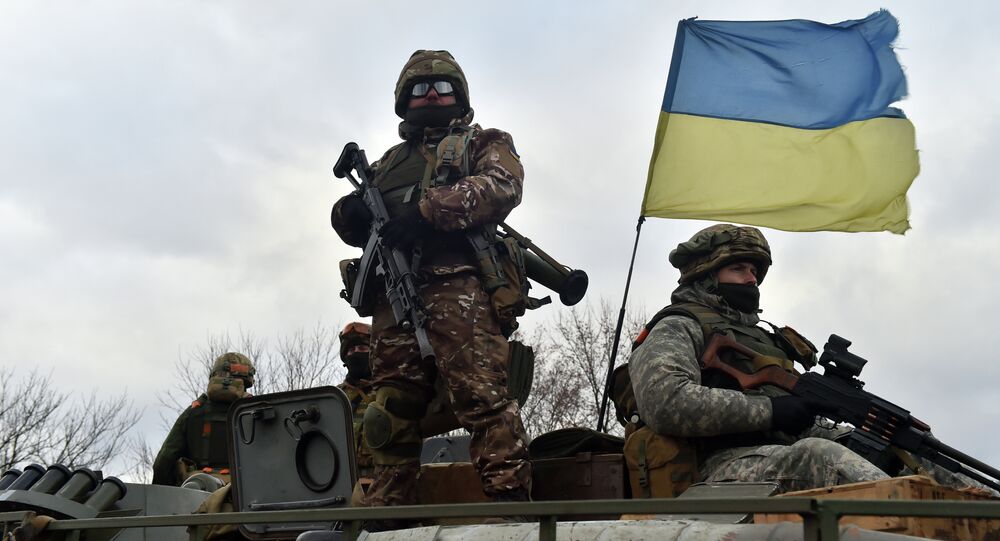 David Westover, a spokesman for US European Command, said that the training of the Ukrainian National Guard by the US Army Europe soldiers will start in spring following Kiev’s request.

WASHINGTON, January 22 (Sputnik) — The training of the Ukrainian National Guard by the US Army Europe soldiers will start in spring following Kiev’s request, spokesman for US European Command David Westover told Sputnik on Thursday.

“The training, scheduled to begin in spring, comes at the request of the Ukrainian government as they work to reform their police forces and establish their newly formed National Guard,” Westover said adding that the mission is part of a US State Department initiative to assist Ukraine in strengthening its law enforcement capabilities, conducting internal defense, and maintaining rule of law.

© Sputnik / Mikhail Palinchak
Poroshenko Says Military Solution to East Ukraine Conflict Nonexistent
US Congress has already approved the funding for the training. It will be allocated from the Global Security Contingency Fund, which is the US government mechanism for providing security sector assistance for partner countries.

The spokesman noted that the initiative to train the National Guard is still at the planning stage.

“We're still in the planning stages of determining which units will provide training and how many personnel will be required to train four maneuver companies and one tactical-level headquarters unit of Ukraine National Guard forces to standard,” Westover said.

The Ukrainian National Guard comprises of troops and activists from Maidan self-defense squads. Its fighters had been participating in Kiev's military operation in eastern Ukraine since when it started in April of 2014. In October 2014, the Russian Investigative Committee claimed it had irrefutable evidence of Ukraine’s National Guard and the Right Sector nationalist group’s participation in the mass killings.

Besides, there have been other cases of the National Guard fighters being allegedly involved in the killings of the civilian population in eastern Ukraine, including school shelling in Donetsk that claimed the lives of at least two children. Ukrainian authorities denied the accusations.

© Sputnik / Mikhail Parhomenko
Military Escalation in East Ukraine Calls for Urgent Global Action
Ben Hodges, Commander of the US Army in Europe, is in Kiev this week to meet with Ukraine’s officials to discuss military cooperation between the two countries. The visit takes place amid the growing tensions and escalation of the violence in eastern Ukraine.

Clashes between Kiev forces and Donbas independence supporters intensified in the first weeks of 2015, despite a ceasefire agreement reached in September, and a «silence regime» introduced in the region on December 9.

The authorities of the Donetsk and Luhansk people’s republics repeatedly stated that Kiev was using truce period to strengthen its forces and prepare for a new offensive.