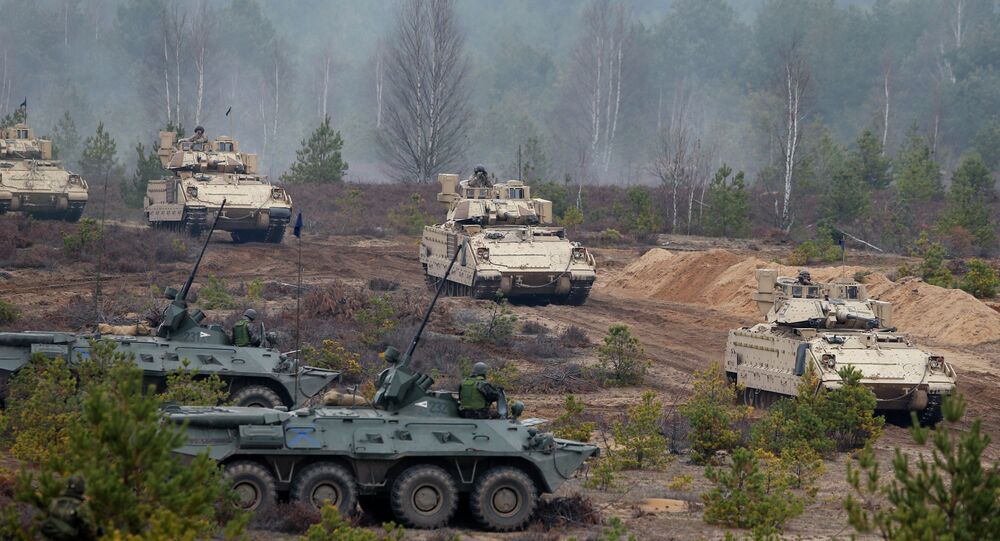 According to a US Army document obtained by Sputnik, plans to deploy any heavy armor vehicles and equipment in the Baltic states or Poland would involve close coordination and consultation between the US and these countries.

© Flickr / 7th Army Joint Multinational Training Command
US Plans to Deploy 150 Tanks in Eastern Europe
MOSCOW, November 26 (Sputnik), Alexander Mosesov — The deployment of additional US military equipment, including tanks, to Europe is in line with the Operation Atlantic Resolve and is not connected with the geopolitical tensions in Ukraine and Eastern Europe as previously reported, a US Army spokesperson told Sputnik Wednesday.

"This [military equipment set increase] ties with the Operation Atlantic Resolve, this operation continues through 2015, we're looking at the best way to support the operation in future… I think what happened is there was some confusion," Lt. Col. Alayne Conway told Sputnik News Agency, commenting on the media reports earlier this week mentioning an alleged increase of US military presence in Eastern Europe amid the developments in Ukraine and in Eastern Europe in general.

"Right now there's a brigade… that's working with the Baltic nations in Poland and so there's a plan to rotate these units every few months… There are tanks there… he [Lt. Gen. Ben Hodges, Commander of the US Army in Europe] talked about the positioning of additional equipment… that equipment includes tanks and trucks," the US Army spokesperson added.

© Sputnik / Alexandr Kryazhev
US to Move Tanks to Poland, Romania, or Baltics: Defense Department
Conway told Sputnik that the US Army specified the unit that is stationed in Europe now (1st Brigade, 1st Cavalry Division) in August 2014 and that Lt. Gen. Ben Hodges only considered "increasing the equipment for the rotating forces which gives them more capability — this facilitates the relationships we have with the host nation forces in a firm demonstration of US commitment to NATO."

According to a US Army document obtained by Sputnik, "any plans to preposition heavy armor vehicles and equipment in the Baltics or Poland would involve close coordination and consultation between the US and the host countries."

© East News / AP Photo/Manuel Balce Ceneta
US Provides Only Non-Lethal Aid to Ukraine: Defense Department
US Operation Atlantic Resolve comprises all US efforts to support their NATO allies and partners in Europe.

There are currently signs of increased US presence in Eastern Europe as NATO has stepped up its military activities near the Russian border, including in the Black Sea and the Baltic region. In particular, the US-led alliance sent additional warships to the Black Sea and bolstered air patrolling missions over the Baltic states.