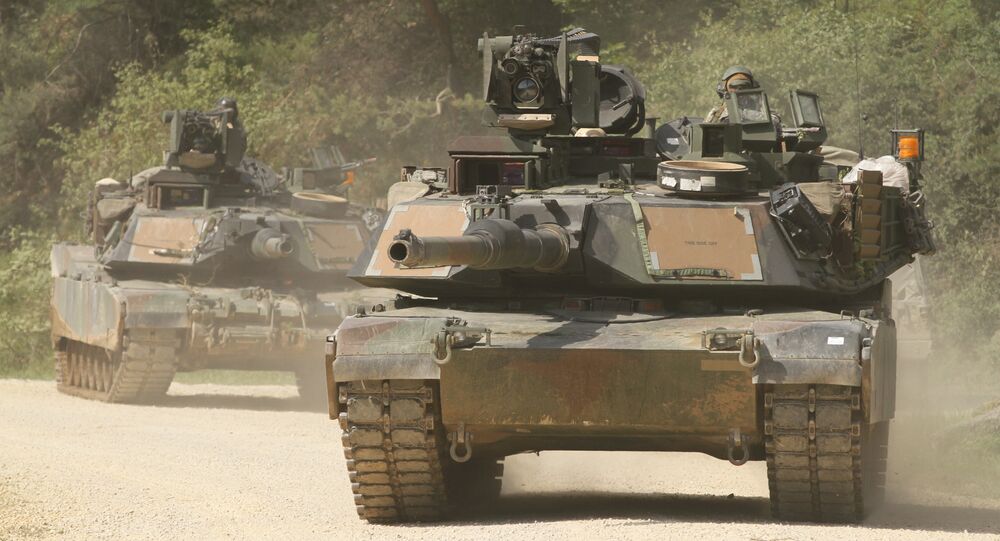 The US Department of Defense plans to boost the number of M1 Abrams tanks and M2A3 Bradley Fighting Vehicles on the territory of NATO member states in Eastern Europe to 150 units in 2015.

© Sputnik / Alexandr Kryazhev
US to Move Tanks to Poland, Romania, or Baltics: Defense Department
MOSCOW, November 26 (Sputnik) – The US army plans to station about 150 tanks and other armored vehicles in Eastern Europe next year, a top American general Ben Hodges said.

“The troops will come over and train, and they’ll go back. The equipment will stay behind,” Hodges said in an interview with AFP.

The move is part of “Operation Atlantic Resolve”, which according to Hodges aims to “provide assurance to those allies that are closest to the [Russian] threat,” Russia Today (RT) News Agency reported. US troops will conduct joint military exercises with their NATO allies, AFP said.

Since this fall nearly 50 US M1 Abrams tanks and Bradley Fighting Vehicles have been stationed in Latvia and Poland, RT reported.

The US plans to “pre-deploy” another 100 tanks in Germany to conduct joint military drills with its NATO partners, according to Hodges, AFP informed.

© Flickr / Medien Bundeswehr
Russian Security Council: 'NATO Planning New Bases in Eastern Europe'
“I’m going to look at options that will include distributing this equipment in smaller sets, company-size or battalion-size, perhaps in the Baltics, Poland, Romania, Bulgaria, places like that,” Hodges said, as quoted by RT.

Earlier this year, about 600 US military personnel arrived in the Polish town of Malbork.

The US has some 29,000 personnel permanently stationed in Germany, Italy and Belgium, but this number is set to grow as NATO member states have requested that the Pentagon send more troops to Eastern Europe amid their perception of the Russian threat in the region, RT said.

NATO to Set Up Another 5 Military Bases in Eastern Europe