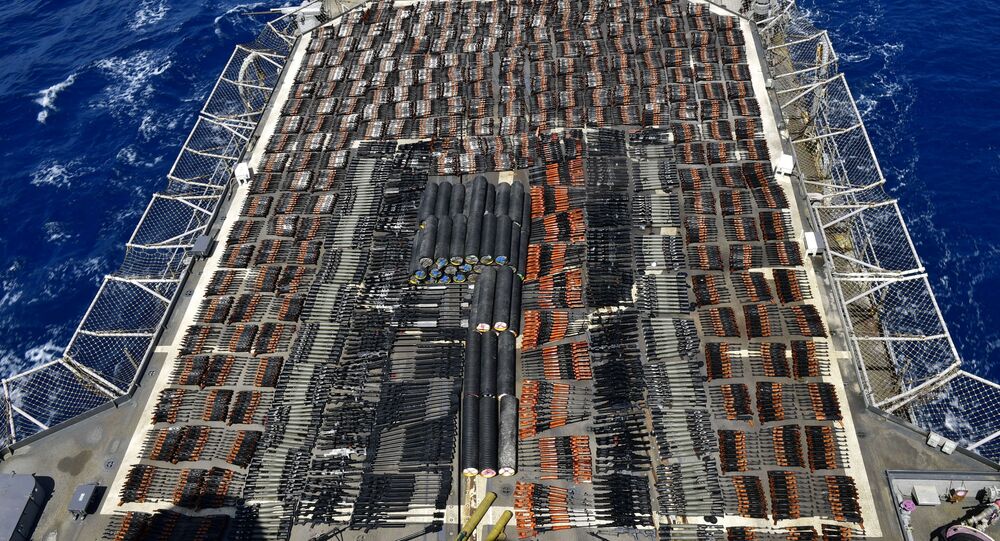 The cargo, found in the Indian Ocean, reportedly contained Russian and Chinese-made "illegal" weapons, and it remains unknown from where the weapons were taken and where they were supposed to be delivered.

The US Navy has intercepted a consignment of illicit weapons carried by a vessel in the international waters of the Northern Arabian Sea.

The photos of the cargo, that allegedly included “advanced Russian-made anti-tank guided missiles & Chinese Type 56 assault rifles,” were posted on the official US Fifth Fleet Twitter account on Friday.

The US Fifth Fleet used an SH-60 Seahawk helicopter, which took off from guided-missile cruiser USS Monterey (CG 61), to stop a stateless vessel for a flag verification during routine patrols.

The suspicious ship had been under surveillance by the USS Monterey for some 36 hours before being approached. The cargo was confiscated and now awaits disposal as an investigation is carried out to determine the source of the weapons and its final destination. Meanwhile, the crew of the unidentified ship were released “after questioning” and the “dhow was assessed for seaworthiness.”

​The Fifth Fleet’s area of responsibility includes the Western Indian Ocean and the Persian Gulf. Its main base is located at the Manama military base in Bahrain.