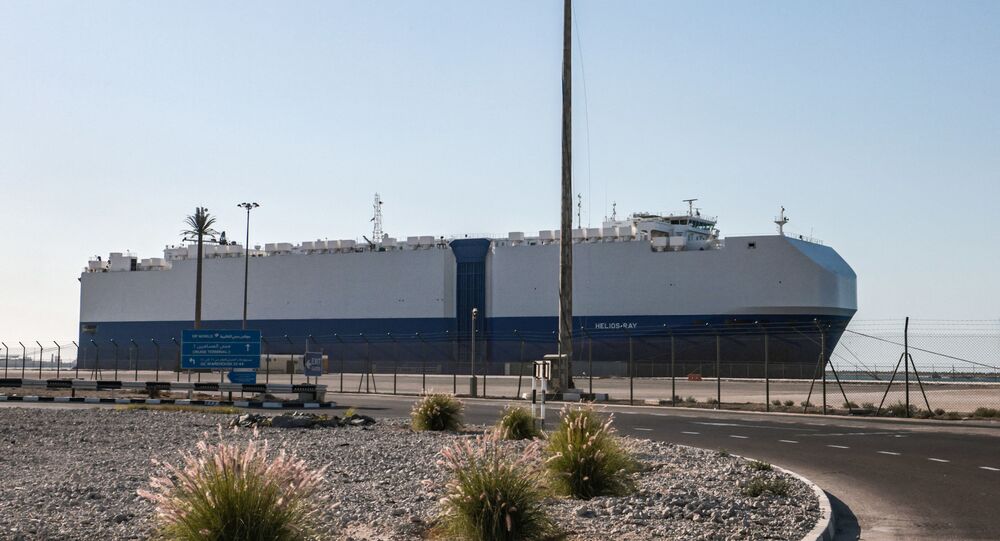 Last week, Iran rejected Prime Minister Benjamin Netanyahu's claims that Tehran was "clearly" behind the 25 February explosion on board an Israeli-owned cargo ship in the Gulf of Oman.

On Sunday, the Lebanese broadcaster al-Mayadeen released alleged Iranian drone footage of an Israeli-owned cargo ship after it was hit by a blast in the Gulf of Oman in late February. The network posted the images to their YouTube channel.

The 48-second clip specifically focuses on holes in the side of the MV Helios Ray, just above the waterline.

The news outlet cited an unnamed Iranian official who purportedly provided the video as saying that "elements from inside the ship itself caused these holes" as a deception.

The official added that Iran had "no reason to carry out an operation against an Israeli cargo ship, especially in the weeks before the elections", an apparent nod to the 23 March parliamentary vote in the Jewish state.

"[Israeli Prime Minister Benjamin] Netanyahu's claim that Iran targeted the ship on the eve of the Israeli elections raises suspicions", the source argued.

The remarks came a day after Iranian Ambassador to the United Nations Majid Takht Ravanchi warned of consequences for Tel Aviv over any possible miscalculated measure in connection with the Helios Ray incident.

In a letter to UN Secretary General Antonio Guterres, Ravanchi claimed without elaborating that "the incident has all the characteristics of a complicated false flag operation carried out by actors in order to pursue their malign policies and to advance their illegitimate objectives".

The ambassador stressed that Israel, by regularly levelling accusations and threats at Iran, is "playing victim to distract attention away from all its destabilising acts and malign practices across the region".

© AP Photo / Kamran Jebreili
The Israeli-owned cargo ship, Helios Ray, sits docked in port after arriving earlier in Dubai, United Arab Emirates, Sunday, Feb. 28, 2021. The ship has been damaged by an unexplained blast at the gulf of Oman on Thursday

Iranian government spokesman Ali Rabiei, in turn, also dismissed Tel Aviv's accusations, noting that Israel's "blame game" is nothing new and that Tehran's policy in the region is aimed at maintaining peace and stability in the waterways.

This was preceded by Netanyahu pointing the finger at Iran over the 25 February incident during his interview with Israel's Kan Radio last week.

On 25 February, the MV Helios Ray suffered two blasts on the port and starboard sides of its hull above the waterline, as it was sailing through the Gulf of Oman on its way to Singapore.

Despite the cause of the explosions still being unclear, the damage sustained did not result in the pollution of the waterway or result in any casualties. The vessel later managed to make it to the nearest port to undergo repairs.

© CC BY 2.0 / Francisco Anzola / Late afternoon at the beach
Israel Reportedly Points Finger at Iran After Cargo Ship Explosion in Gulf of Oman
The incident occurred amid simmering tensions between Tel Aviv and Tehran, which has repeatedly threatened to destroy Israel, rejecting the Jewish state's right to exist. Israel, in turn, accuses Iran of trying to obtain a nuclear weapon and seeking to boost its military presence in Syria.

Tehran claims that there are only Iranian military advisers in the Arab country to help Damascus tackle terrorist groups.