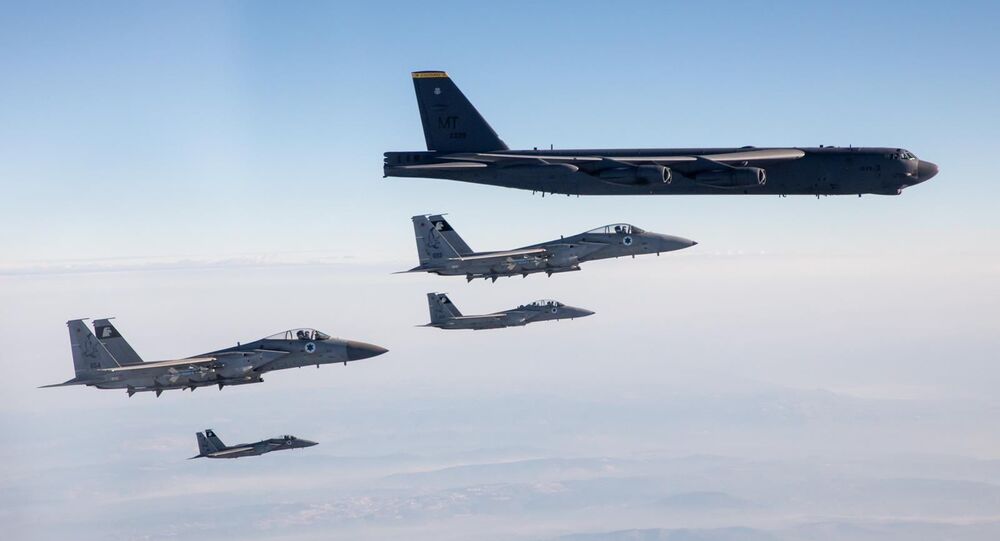 Video: Israeli F-15s Escort American B-52 Bombers in Show of Force to Iran

Sunday's military maneuver is said to be the seventh mission over the past 6 months. However, it was the first time that the Israeli warplanes were pictured alongside the American bombers.

The military added that the strategical fly-by was "pivotal in maintaining the security of Israeli and Middle Eastern skies." The IDF did not state directly that the maneuver was aimed at Iran, but given the extremely heightened tensions in the region, it is most likely that the fly-by over the region was designed to show force to Tehran.

This flight is part of the joint strategic cooperation with US forces, which is pivotal in maintaining the security of Israeli and Middle Eastern skies. pic.twitter.com/CViOa3LvBT

Meanwhile, Iranian Defence Minister Amir Hatami vowed on Sunday that Tehran will "raze Tel Aviv and Haifa to the ground" - the two largest cities in the country - if the Jewish state somehow attempts to attack the Islamic Republic.

Earlier this week, Israeli Defense Minister Benny Gantz revealed to Fox News that Tel Aviv has identified "numerous targets" inside Iran whose destruction could potentially harm Tehran's ability to develop a nuke. Israel has repeatedly accused its neighbor of developing weapons of mass destruction, which Iran strongly denies, insisting that its nuclear program is designed to serve peacful purposes only.

A corner of the map Benny Gantz @gantzbe showed fox news reporter @TreyYingst includes Lebanon North East border with Syria. Looks like they got a bunch of targets there too.https://t.co/4vQX5hYMEi pic.twitter.com/epOIQS0fBt

At the same time, Tehran has pointed out "double standards" in terms of nuclear security, as Israel itself is largely believed to possess nuclear weapons, though it neither denies nor confirms the reports. Kazem Gharibabadi, Iran’s ambassador to international organizations in Vienna, stressed that Israel's suspected possession of a nuclear arsenal threatens not only security and stability in the Middle East, but also harms the efficiency of the Treaty on the Non-Proliferation of Nuclear Weapons.

In mid-February, media reported that Tel-Aviv was carrying out a major expansion of the Dimona nuclear facility in the Negev desert. The International Panel on Fissile Material (IPFM) released satellite pictures that reportedly showed "significant new construction" at the site. Reports say that Israeli could be in possession of about 90 nuclear warheads.

Tensions in the Middle East have been heightened following the assassination of Iran's top nuclear physicist Mohsen Fakhrizadeh, with Tehran putting the blame for his death on Israeli intelligence. Tel-Aviv has neither dismissed nor agreed with the accusations. However, Israeli Prime Minister Benjamin Netanyahu was previously seen discussing Fakhrizadeh who, he claimed, had headed a special unit within the Iranian military that was allegedly working on developing a nuclear weapon.