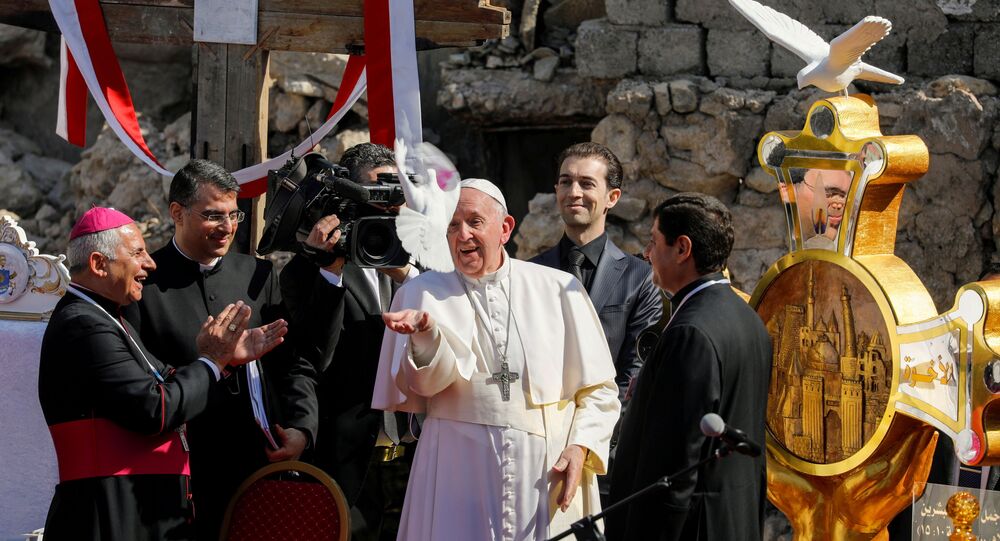 MOSCOW (Sputnik) - Pope Francis visited the cities of Erbil, Mosul and Qaraqosh in northern Iraq that were once hostage of the Daesh* terrorist organization on Sunday.

"You have protected the Christians when Daesh attacked," the pope said during the private meeting at the airport's presidential lounge, as quoted in the report, describing the Kurdistan Region as a "home for displaced Christians."

The pontiff then headed to Mosul on a helicopter to deliver a prayer in Suffrage of the Victims of the War. Mosul, adjacent to the Biblical city of Nineveh, was liberated from the three-year Daesh occupation by the Iraqi and international forces in 2017.

As Pope Francis spoke from the scene installed in Hosh al-Bieaa, or the Square of the Four Churches — Armenian Orthodox, Chaldean, Syriac Catholic and Syriac Orthodox — representing the pluralistic identity of Iraq, ruins of the churches destroyed by the terrorists from 2014-2017 were behind him.

The pope will then visit Iraq's largest church, the Church of the Immaculate Conception, located in nearby Qaraqosh (Bakhdida), which was also partially destroyed by terrorists.

Pope Francis is expected to return to Erbil for a final mass in the afternoon for some 10,000 attendees.

The historic papal visit to Iraq began on Friday with the focus on rallying the country's Christian community and preaching religious tolerance and peaceful coexistence.

The 84-year-old pontiff first arrived in Erbil, the capital of Iraqi Kurdistan, around 9 a.m. local time (06:00 GMT). He was greeted at Erbil International Airport by Kurdistan Region Prime Minister Masrour Barzani and President Nechirvan Barzani, as well as former President Masoud Barzani, as reported by the Kurdistan 24 broadcaster.