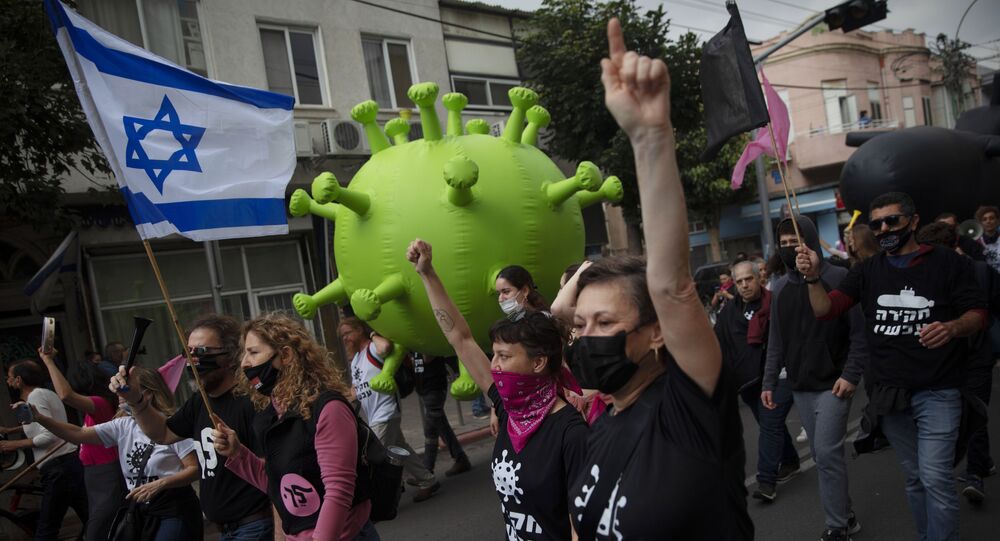 Israelis have been protesting regularly for months despite the raging pandemic, accusing the government of mishandling the coronavirus situation in Israel, which has led to an economic crisis in the country.

Thousands of people gathered for an anti-government demonstration outside Prime Minister Benjamin Netanyahu's official residence in Jerusalem, demanding him to resign from office, Haaretz reported Saturday.

Several groups of protesters reportedly marched through the city streets before meeting at a destination on Balfour Street.

Social media users have shared videos from the rally, in which protesters are seen chanting political slogans, while drumming and dancing to the beat.

​Clashes broke out between law enforcement officers and demonstrators after one of the exits from Paris Square, the site where the demonstration took place, was blocked by police. One protestor reportedly suffered a head injury and was evacuated from the scene.

Other videos showed protesters carrying prop submarines with them, commonly seen in reference to the so-called Submarine corruption scandal, in which Netanyahu allegedly hid relevant information from military officials when the country had decided to purchase new submarines.

Along with submarines, some demonstrators carried large green balloons shaped like the COVID virus.

© AP Photo / DAVID SILVERMAN
Too Many Rivals Have Tried to Bury Netanyahu Politically But He Cannot Be Underestimated, Here's Why
Police had closed the streets around the residence of the prime minister prior to the protest. At the same time, in Caesarea, hundreds of people reportedly marched to the prime minister's private house.

Earlier in the day, demonstrations took place at bridges and intersections throughout the country.

For more than seven months, anti-government protests have been ongoing, with the object of demanding Netanyahu's resignation due to the trial on charges of bribery, fraud and breach of confidence and the handling of the COVID-19 pandemic by the government. Netanyahu denies any misconduct.