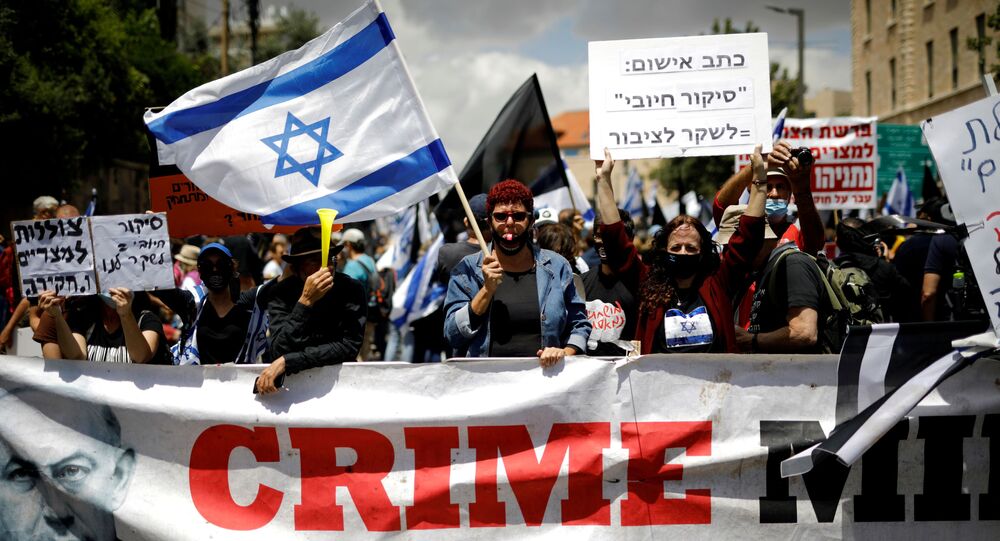 Anti-government demonstrations have been ongoing for over six months, with citizens demanding Bibi's resignation over the trial on charges of bribery, fraud and breach of trust and the government’s handling of the COVID-19 pandemic. Netanyahu denies any wrongdoing.

Thousands of protesters gathered outside the Jerusalem residence of Prime Minister Netanyahu on Balfour street on Saturday, demanding his resignation, The Times of Israel reported.

According to the report, hundreds of people participated in a march from the main entrance of Jerusalem to Paris Square, the main site of the demonstration. Many of them held signs urging Netanyahu to go, and stating that they "won’t stop protesting until you get out of our lives".

Several dozen people reportedly clashed with police officers outside Netanyahu’s residence. The demonstrators arrived a few hours before the usual time, which took the police by surprise, at first allowing the protesters to get closer to the entrance of the residence before blocking the way.

Some demonstrators reportedly carried burning torches and ignited a bonfire near the gates. They were later evacuated by officers, and firefighters extinguished a fire they had set. Three people were arrested, reports say.

While the largest action was held ouside Netanyahu's residence, protests took place throughout the country on Saturday, including the city of Caesarea, near Netanyahu’s private home, and at plazas, intersections and highways.

Cases of violence were also reported in Rishon Lezion, where a man threatened demonstrators while holding a knife. And in Giv’at Ada, near Caesarea, protesters were reportedly attacked by several supporters of the PM.

The latest protests took place against the background of the upcoming Knesset snap elections, expected in March. The Israeli parliament dissolved on Tuesday after weeks of failed budget talks between Netanyahu and Defense Minister Benny Gantz.

On Wednesday, Israel’s parliament approved an amendment to a coronavirus law that sets limits to the size of protests. No more than 20 people can gather at one place, and only those living within one kilometer (0.6 miles) of a rally scene are permitted to attend. The legislation and the overall coronavirus restrictions tightening are viewed by some as an attempt to contain the demonstrations.

Nationwide protests calling on Netanyahu to step down in light of the economic crisis caused by the pandemic have been continuing since July.

'Can Somebody Find a Vaccine For This?' Tweeps Unamused as Israel Gallops Towards Fourth Election

Turkey Wants to Improve Ties With Israel But is Against Its Stance on PNA, Erdogan Says

Israel Likely to Be First Country to Get Out of Pandemic, PM Netanyahu Says