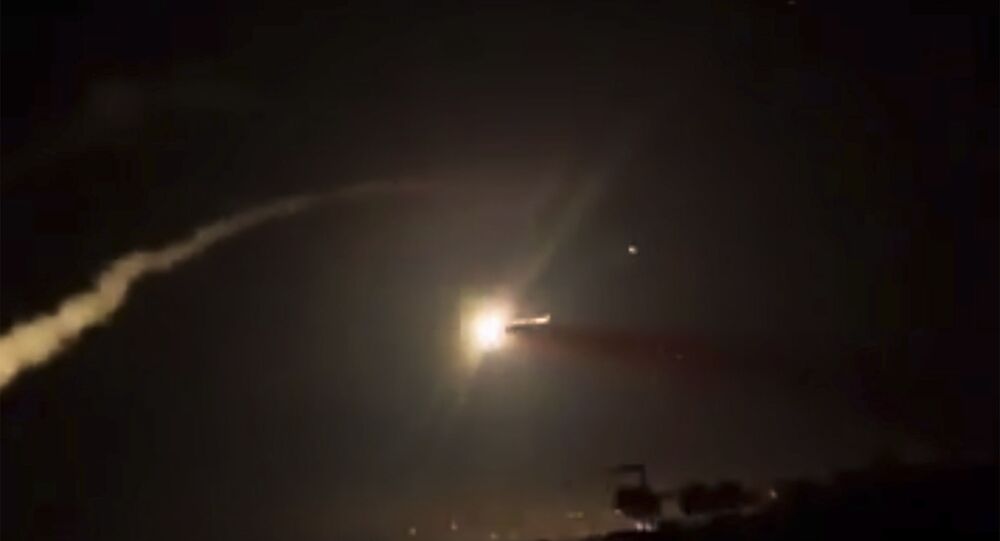 On Wednesday, state-controlled Syrian Arab News Agency (SANA) reported that explosions were heard in Damascus area as Syrian air defenses were responding to what was described as "Israeli aggression".

According to SANA citing military source, "Israeli agression" resulted in one death and three wounded soldiers, along with material losses.

The incident took place "at exactly 1:30 a.m. [local time] today", with Israel allegedly carrying out an airstrike, launching rockets from northern Galilee. The reported strike targeted a unit of Syrian air defense in the Nabi Habeel area in the Damascus countryside.

Some of the missiles were said to be intercepted by the Syrian air defense systems.

Videos allegedly filmed on scene were shared in social media.

Footage of a missile that fell in Zabadani, Countryside of Damascus, Syria 🇸🇾 pic.twitter.com/yra6kp22py

🚨#BREAKING | Live footage shows a huge weapon cache of IRGC and Hezbollah on fire at Al-Zabadani neighborhood of Damascus as a result of airstrike of Israel Air Force#BaghdadPost #BreakingNews #Syria #IDF #Israel pic.twitter.com/6gOd5L5qbe

​The latest report comes after Syrian air defenses responded to "Israeli aggression" in the area of Masyaf, in the northwest of the country last week.

“Precisely at 0:40 am today [22:40 on Thursday, GMT], the enemy Israeli jets fired missiles from the Lebanese airspace, over the city of Tripoli, toward the town of Masyaf in the western part of the Hama province,” the Syrian Ministry of Defense said in a statement last week.

“We have struck over 500 targets this year, on all fronts, in addition to multiple clandestine missions,” Kochavi said at the time.

"The Iranian entrenchment in Syria is in a clear slowdown as a result of IDF activity, but we still have a long way to go to complete our goals in this arena," Kochavi added.

Syria has been embroiled in a civil war since March 2011. The conflict has killed hundreds of thousands of people and caused more than 5 million Syrians to become refugees.