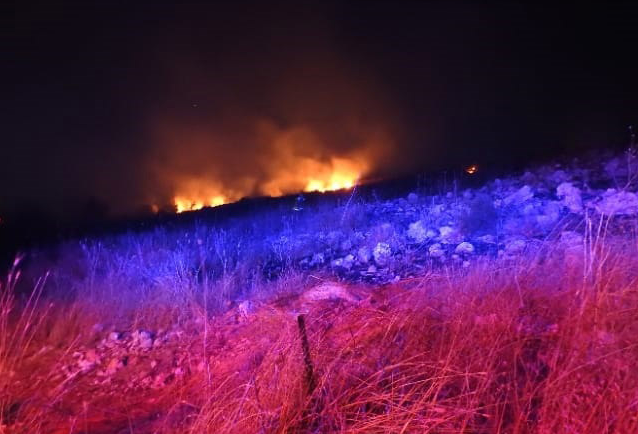 Israeli Prime Minister Benjamin Netanyahu called on Lebanese political party and militant group Hezbollah not to “test” Israel on Wednesday referring to a border incident that occurred the previous night.

“Israel sees firing at its troops as a very serious incident,” Netanyahu said. “We will not tolerate any act of aggression and we will react forcibly to any attack. I strongly suggest Hezbollah not to test Israel’s crushing resolve,” he added.

Netanyahu met with Defence Minister Benny Gantz, IDF Chief of Staff Aviv Kochavi and other senior military officials in the early hours of Wednesday to discuss the security situation along the border with Lebanon.

Israeli fighter jets and helicopters targeted what the IDF said were Hezbollah observation posts Wednesday after the militant group was accused of small arms fire against Israeli soldiers. No troops were injured in the reported firefight.

During operational activity in northern Israel last night, shots were fired from Lebanon toward IDF troops. We responded with fire, & our aircraft struck Hezbollah observation posts near the border.

This is a severe event & we remain ready to combat any threat to our borders. pic.twitter.com/ECJeVov9bA

Lebanon’s Supreme Defence Council denounced what it called an “Israeli assault” on the country and promised to file a complaint to the United Nations, which has thousands of peacekeepers patrolling the border area.

The Lebanese Army said Israeli helicopters fired missiles at centers of the ‘Green Without Borders’ environmentalist NGO, a group which cooperates with Hezbollah. According to the Army, the “Israeli enemy” launched 13 missiles at targets near the towns of Ramia, Aita al-Shaab and Tel Raheb.

In addition, the Army alleged that Israel fired 117 flares and roughly 100 shells, some explosive and others containing phosphorous, into or near the towns of Mays al-Jabal, Hula, Maroun al-Ras, and Aitaroun, causing fires in wooded areas, damaging a home, and killing a number of goats at a farm. Explosions were also said to have been heard in the Israeli-occupied Lebanese territory of Shebaa Farms.

The border clashes began several hours after the Lebanese government formally rejected an Israeli proposal to reformat the United Nations peacekeeping force which has been patrolling the Lebanese-Israeli border since 1978. The UN Security is expected to vote on renewing the force’s mandate on August 31.

The UN force was beefed up substantially following the 2006 Lebanon War. Israel wants major changes to the force’s structure to make it ‘more efficient’ and more active against Hezbollah’s activities in the border area, including the mandate to inspect private property. The Lebanese government and Hezbollah want the peacekeeping mission renewed without any changes to its mandate.