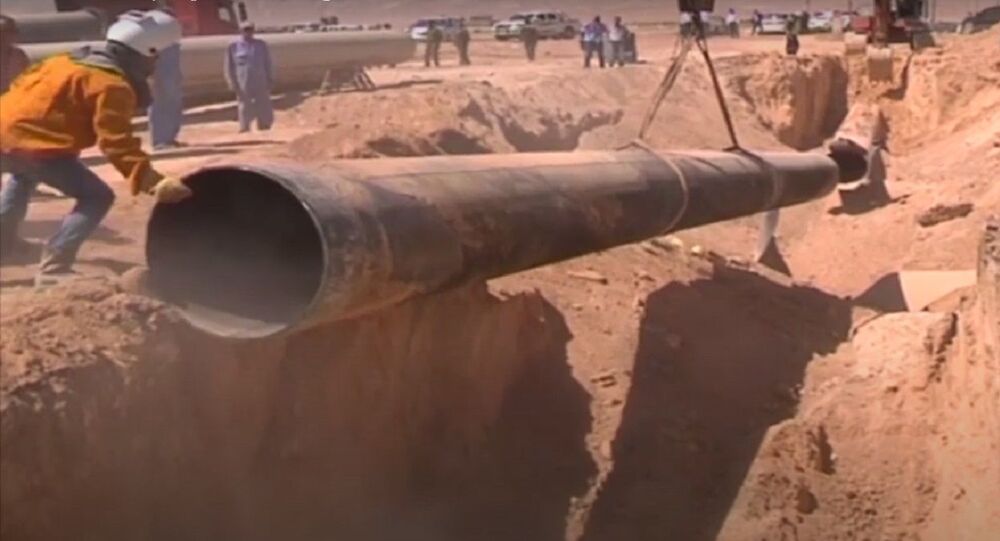 An explosion rocked a major gas pipeline outside Damascus in the early hours of Monday morning, causing a massive fire and a nationwide blackout. Syrian Oil Minister Ali Ghanem said the blast hit a line feeding as many as four power generating stations in southern Syria, and categorised the incident as a “terrorist attack”.

Syrian oil ministry workers have completed repair work on the damaged section of the Arab Gas Pipeline between al-Dumair and Adraa outside Damascus, which witnessed an explosion on Monday which led to a nationwide blackout.

Bassam Tarraf, director of the Syrian Gas Company, announced that repairs were complete by dawn on Tuesday, with gas supplies sent flowing toward power generating stations which had been knocked out following Monday’s blast. According to the official, work is now in progress to increase pipeline pressure to necessary levels, with Deir Ali and Tishreen, two of the four power stations affected by the loss of gas supplies, expected to start generating electricity later Tuesday.

Syrian media have published photos and video of teams of workers working to repair the damage, with personnel working for over 14 hours to fix the strategic piece of infrastructure, and work begun immediately after the fire engulfing the section of pipeline was extinguished by firefighters and civil defence units.

Speaking to Sputnik Arabic, Oil Minister Ghanem said that the pipeline was damaged after a suspected attack early Monday morning in the al-Dumair area, about 50 km northeast of Damascus.

Syrian Prime Minister Hussein Arnous has stated that the repairs of the Arab Gas Pipeline are being proceed at a high pace and by the coming evening all the works will be finished.#Syria pic.twitter.com/sutKnP1z09

Ghanem pointed out that Syria’s energy sector has been repeatedly and systematically targeted by terrorists since the beginning of the war in Syria. He also praised workers’ tireless efforts and technical skill, which he said enabled them to complete the work so quickly.

No group claimed responsibility for Monday’s suspected attack on the Arab Gas Pipeline.

Syria has been forced to ration electricity supplies in recent years amid the war, Western sanctions pressure, terrorist attacks on infrastructure and moves by rebels and foreign forces to seize control of its energy resources. Last year, Donald Trump repeatedly said that the US would be “keeping the oil” in energy-rich northeastern Syria after American troops in the country were transferred from the border with Turkey to the country’s interior. Damascus, which needs the revenues generated from oil and gas resources for its reconstruction efforts, has repeatedly accused the US and its allies of “stealing” Syria’s wealth, and has demanded the withdrawal of all uninvited foreign forces from the territory of the Arab Republic.