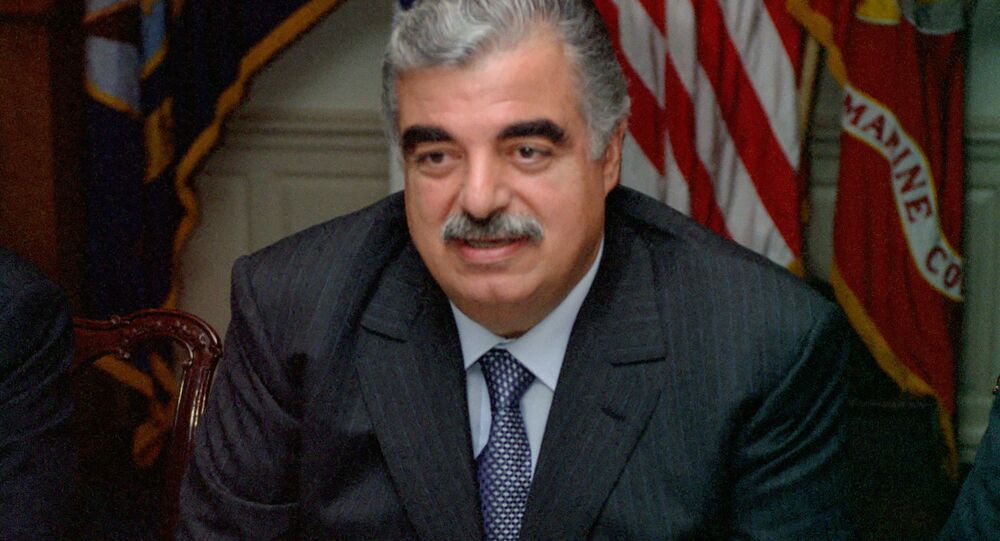 In February 2005 former Lebanese Prime Minister Rafik Hariri was killed when a huge truck bomb blew up in Beirut. Hariri, a billionaire construction tycoon, was Prime Minister from 1992 until 1998 and again between 2000 and October 2004.

A Hezbollah supporter has been found guilty on all counts by a Special Tribunal for Lebanon in the Netherlands but three other men have been acquitted.

​On 14 February 2005 Mr Hariri and 21 others were killed when a truck bomb as he drove through downtown Beirut. More than 200 people were wounded.

Salim Ayyash, 56, has been convicted on all nine counts but Assad Sabra, 43, Hassan Oneissi, 46, and Hassan Habib Merhi, 54, have been found not guilty.

Regarding Mustafa Badriddine, they couldn't connect him to the murder to prove he was the head of this cell that they just acquitted. pic.twitter.com/BSyEzjOA3M

​All had been tried in absentia. Their whereabouts are unknown.

Charges were dropped against a fifth suspect, Mustafa Badreddine, after he was killed during the Syrian civil war in 2016.

The bomb which killed Rafik Hariri on 14 Feb 2005 was packed into a Mitsubishi Canter, similar to this one #Hariri pic.twitter.com/23Vl5z8mWT

​On Tuesday 18 August Judge David Re, an Australian, said the bombing was "undoubtedly a political act" and he said the evidence showed Syria was dominant in Lebanon at the time and opponents of the Syrian presence included Mr Hariri’s Future Movement.

"The trial chamber is of the view that Syria and Hezbollah may have had motives to eliminate Mr Hariri and some of his allies. However, there was no evidence that the Hezbollah leadership had any involvement in Mr Haririr's murder and there is no direct evidence of Syrian involvement in it," said Judge Re.

#Lebanon President Michel Aoun says "we must accept what will be issued by the international tribunal" on the assassination of former PM Rafic #Hariri.@STLebanon delivers its verdict today after 15 years.

Judge Re said the decision to kill Mr Hariri "would not have been taken lightly" as he had several powerful allies in the US, France and Saudi Arabia.

The judge said Mr Hariri was planning to run in the May 2005 elections and would have campaigned for a reduction in Damascus’s influence and the withdrawal of Syrian troops from Lebanon.

[Tweet: "We have been waiting for this moment for 15 years, and this moment reminds us that no matter what happens, we remain one family, one pain and one heart, and this is my covenant with the martyr Rafik Hariri's parents. And I will add to his famous sentence, "No one is greater than a country," that is, "What is greater than the Lebanese decision of truth and justice, and no greater than justice."]

Judge Re said it was "highly likely" the decision to go ahead with the assassination was only taken after the third so-called Bristol Group meeting of Mr Hariri and his political allies in early February.

Hariri's son, Saad - who was himself prime minister between 2016 and January this year - said he accepted the tribunal's ruling and added: "Justice will be executed, regardless of how long it takes."

A number of Victims Participating in the Proceedings are attending today’s Judgment hearing. pic.twitter.com/UlwUIikBYK

Judge Re said Mr Hariri was planning to run in the May 2005 elections and would have campaigned for a reduction in Damascus’s influence and the withdrawal of Syrian troops from Lebanon.

President Assad has always denied any involvement in the assassination but in the wake of Hariri's death a so-called Cedar Revolution saw widespread protests against Syria, which withdrew the last of its troops from Lebanese soil in April 2005.

The prosecution was based largely on mobile phone evidence which suggested the suspects were tracking Hariri's movements for four months before the explosion. The prosecutors said the bombers used a "red network" of six pay-as-you-go phones - bought in Tripoli, northern Lebanon - on the day of the bombing.

The prosecutors at the tribunal did not have to prove a motive for the attack and never put forward any reason for why Hezbollah would want Mr Hariri dead.

So we will NEVER know the identity of the man who exploded/was exploded to kill #Rafik_Hariri...@STLebanon🇱🇧 pic.twitter.com/avziuo3KpY

​But they claimed Hezbollah had deliberately set up a 22-year-old Palestinian man, Ahmad Abu Addas, and persuaded him to put forward a false claim of responsibility on behalf of an "fictional" group.

In the wake of the explosion, al-Jazeera received a video from Mr Abu Adas who claimed to be a suicide bomber who had carried out the attack on behalf of a group called 'Victory and Jihad in Greater Syria' and said Hariri had been a tool of the "infidels" Saudi Arabia.

Harrowing details on "lack of coordinated procedure to look for missing:"

Another victim found day after explosion & likely lived for 12 hours afterwards, "May have survived" if given treatment.

But the tribunal judges ruled that there was insufficient evidence to prove that the defendants had been involved in "tricking" Mr Abu Adas into making the false claim and then delivering it to al-Jazeera's Beirut bureau.​

Mr Hariri was a close ally of both France and Saudi Arabia but since his death it has been revealed he held secret weekly meetings with Mr Nasrallah.

There has been speculation on social media that Hezbollah carried out the bombing as a favour to Syria's President Bashar al-Assad, who reportedly resented Hariri’s efforts to reduce Damascus's influence in Lebanon.

The trial judges made no ruling on Syria's involvement but cleared Mr Badreddine - a senior Hezbollah commander - of being the plot's mastermind.

Judge Re said: "The trial chamber can't be satisfied beyond reasonable doubt that Mr Badreddine masterminded the attack, as alleged."

When the trial opened in January 2014 a prosecutor told judges the explosives packed into a Mitsubishi Canter truck were designed to create a "man-made hell.''

Judge Janet Nosworthy, a Jamaican judge at the tribunal, said the truck used in the attack was a white Mitsubishi Canter, which was stolen in Japan and then imported from the United Arab Emirates. Two unidentified men bought it from a garage in Tripoli in northern Lebanon.

This Hariri-appointed, US puppet denied those claims. The foreign ministry did not approve her actions. So who made her go to the UN and request international forces to intervene about Hezbollah? While the bombing was still not over and the dead were still not buried?

At the end of Tuesday's proceedings Judge Re turned to some of the victims' relatives who were in court and said he hoped the verdict would give them some form of "closure".

​The verdict was delayed for 10 days out of respect for the 185 victims of the 4 August blast in the port of Beirut, which has been blamed on an accidental explosion of ammonium nitrate stored in a warehouse.