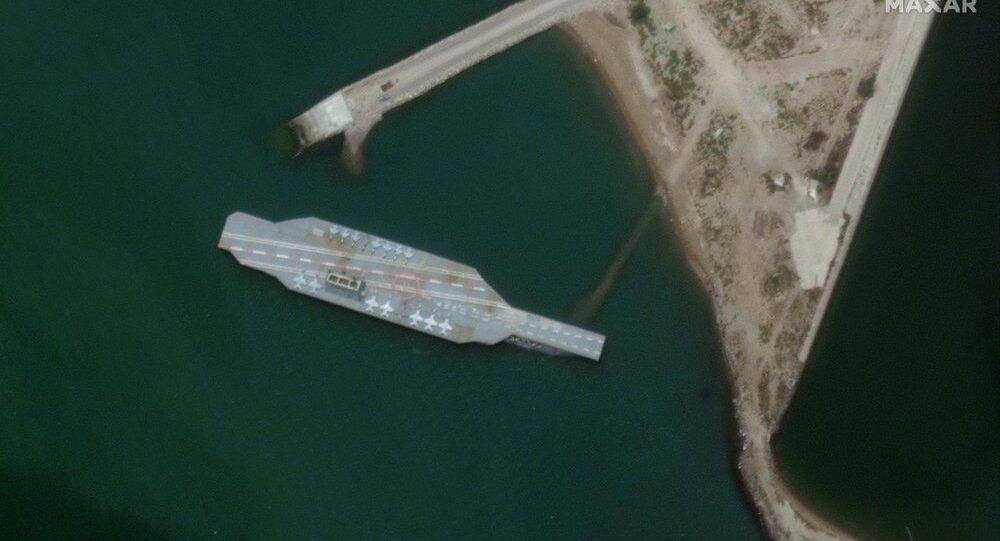 At the same time, Washington has repeatedly ignored Tehran's calls for the US to stop sending its carriers to the Gulf and its warnings that such actions only contribute to the escalation of tensions in the region, not to security.

The US Navy has criticised Iran’s military drills that are taking place along the waterways in the Persian Gulf and Strait of Hormuz, adding that it is monitoring them closely. The American military further called the war games an Iranian attempt "to intimidate and coerce", without clarifying whom or for what purpose.

"We are aware of the Iranian exercise involving attacking a mock-up of a vessel similar to a motionless aircraft carrier [...] We are always watchful of this type of irresponsible and reckless behaviour by Iran in the vicinity of busy international waterways", US Fifth Fleet spokeswoman Rebecca Rebarich said in an interview with AFP.

The US Fifth Fleet official also noted that despite the war games being carried out near the key regional waterways, including the Strait of Hormuz, which is responsible for a major part of global oil shipments, the operations of commercial vessels have not been disrupted. She added that the international maritime coalition's operations were not affected either.

Despite criticising Iranian drills, the US has rarely paid attention to Tehran's warnings that American maritime operations in the Gulf threaten the region’s stability. While the US justifies its military presence in the Gulf by claiming that it is maintaining maritime trade security, Iran has argued that regional countries can handle such tasks themselves and do so better than the American-led coalition.

The ongoing large-scale Iranian drills, dubbed the "Great Prophet 14", are showcasing the country's naval and air might, as they are training to take on a carrier belonging to a "hypothetical enemy". The latter is represented by a mock-up of what looks like a US Nimitz-class supercarrier, albeit around 30% smaller and with over a dozen replica jets on the flight deck.

Iranian television has shown the replica carrier surrounded by speed boats as well as being fired upon with missiles from shore-based launchers. The ongoing war games are also the first to be monitored by Tehran from space - using its recently launched Noor military satellite, Islamic Revolutionary Guard Corps representative revealed in an interview with Tasnim News Agency.

This is not the first time Iran that uses an apparent mock-up of an American carrier in drills, although it is a rare occurrence. The last time such replica was used by Tehran was during the Great Prophet 9 drills in 2015. Back then, the country was still in a deadlock in negotiations with the P5+1 countries and the EU regarding the lifting of sanctions in exchange for halting its nuclear programme. This time, the use of a mock-up carrier comes at a moment when the said deal is in shambles and tensions between Iran and the US are high.