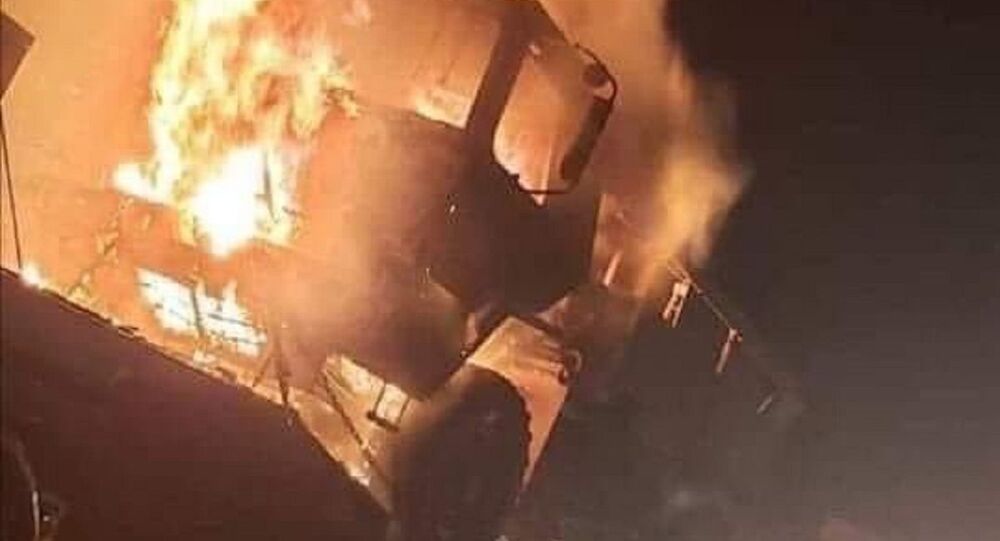 The alleged incident comes less than two weeks after an attack on a logistics convoy on its way to a US base in Al Diwaniyah, central Iraq, with the Iraqi drivers in that incident forced to leave their trucks, after which unknown militants aboard pickup trucks set the vehicles on fire and fled the area.

A convoy carrying supplies to a US base in southern Iraq was targeted by two roadside bombs on Wednesday, Anadolu Agency has reported, citing an Iraqi police captain.

“Two explosive devices blew up a tire on Iraqi trucks carrying logistical support for American forces on the al-Bathaa road in Dhi Qar province,” the agency’s source, who was not cleared to speak to the media, said.

The bombs were said to have caused damage to the trucks and their cargo. Anadolu’s source did not mention any human casualties.

Wednesday’s reported bombing attack in Dhi Qar took place about 200 km southeast of a July 12 arson attack on another convoy carrying US equipment along the Samawah-Diwaniya highway. That attack destroyed three vehicles, with the hit-and-run attack reported to have lasted less than ten minutes and caused no casualties.

No group has claimed responsibility for either of the attacks. However, Baghdad-allied Shia militias have been promising to kick US forces out of the country since January, when the US launched a drone strike which killed Kata’ib Hezbollah founder and Popular Mobilization Forces deputy commander Abu Mahdi al-Muhandis and Iranian Revolutionary Guard Quds Force commander Qasem Soleimani in Baghdad.

© Photo
Videos Allegedly Showing US Military Convoy Ablaze in Southern Iraq Emerge Online
Soon after the twin assassinations, Iraq’s parliament voted to expel US troops from the country. In the months since, Washington has dragged its feet, threatening to sanction Baghdad and demanding compensation for billions of dollars in military infrastructure built in Iraq by the US over the past decade and a half.

Iraqi Prime Minsiter Mustafa al-Kadhimi is expected to visit the US at a later date for a second round of talks on the withdrawal of US forces. However, earlier this month, US Central Command chief Gen. Kenneth F. McKenzie Jr. expressed confidence that Baghdad would ask the US military to stay in the country to confront ‘Iran-linked’ militias.