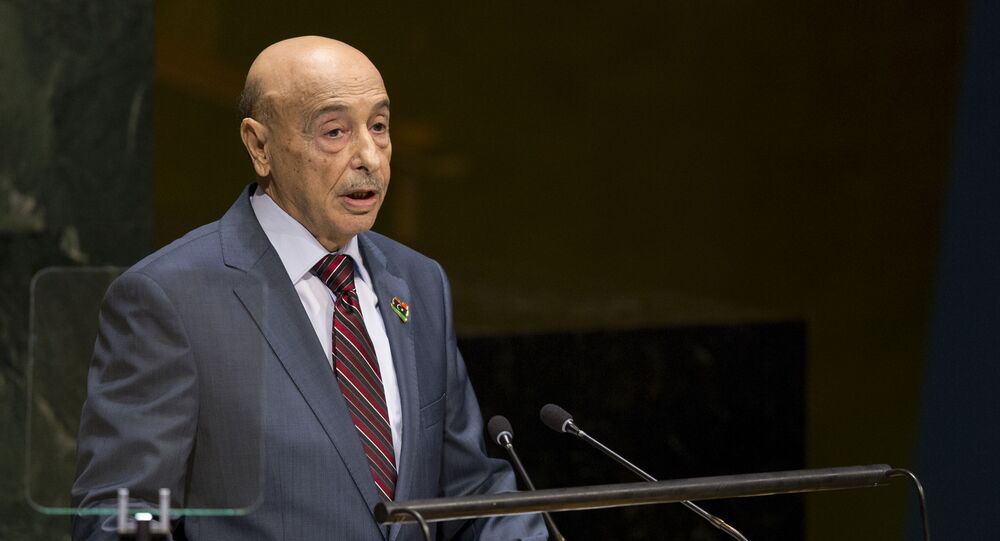 Aguila Saleh on Libyan Crisis: Cairo Declaration is ‘The Only Solution’

(Sputnik) – Aguila Saleh, the president of the eastern-based Libyan Parliament, arrived in Moscow on Thursday to meet with Russian officials to discuss several issues, at the top of which was the initiative on a ceasefire, the return to the political process, and the Cairo Declaration on Libya, as well as the output of the Berlin Conference.

The President of the eastern-based Libyan Parliament, Aguila Saleh, said on Friday that the Cairo Declaration is the only solution to the crisis in Libya, pointing out that there is consensus among Libyans.

“In the Cairo Declaration, of course, as I mentioned [...] we believe that it is the only solution to the crisis in Libya because there is no marginalization or exclusion for anyone, and therefore, we even see that there is consensus among the Libyans on this declaration,” Saleh said on Friday. “We came [to Moscow], actually, to confirm this declaration and urge our Russian friends to move forward in this direction”.

The President said that UN Secretary-General Antonio Guterres is in favor of the Cairo Declaration, adding that he would be visiting Geneva within two days to meet with Acting Special Representative of the UN, Secretary-General for Libya Stephanie Williams and urge her to “come to Libya to work on the implementation of this declaration, which we believe is the only way out of the crisis in Libya”.

Saleh also said that he is intending to visit Rome, Algeria and other countries with the same purpose.

On 6 June, Egyptian President Abdel Fattah Sisi had a meeting with Saleh and the commander of the Libyan National Army (LNA), Field Marshal Khalifa Haftar. Following the talks, Sisi announced the so-called Cairo Initiative that outlined conditions of a political settlement in Libya and stipulated that a ceasefire be declared on 8 June.

According to Sisi, the initiative envisages an equal representation of the three regions — Tripolitania, Cyrenaica and Fezzan — in the presidential council, the unification of Libyan state institutions and the adoption of a constitutional declaration.

In June, the League of Arab States, following a meeting at the level of foreign ministers, stressed commitment to the unity and sovereignty of Libyan lands and the necessity of working to restore the state and its institutions, away from external interference. The league also called for the withdrawal of all foreign forces from Libya and its territorial waters.

The Arab League also welcomed the Cairo Declaration on Libya, which stresses that the solution of the conflict in Libya must be based on Libyan political agreement, the relevant Security Council resolutions and the outcomes of the Berlin Conference as well as the previous summits and other international efforts.

Libya has been suffering from a civil war since its long-time leader, Muammar Gaddafi, was overthrown and killed in 2011.

At the moment, the east of the country is ruled by a parliament supported by the Libyan National Army, while the west is controlled by the Tripoli-based Government of National Accord (GNA).