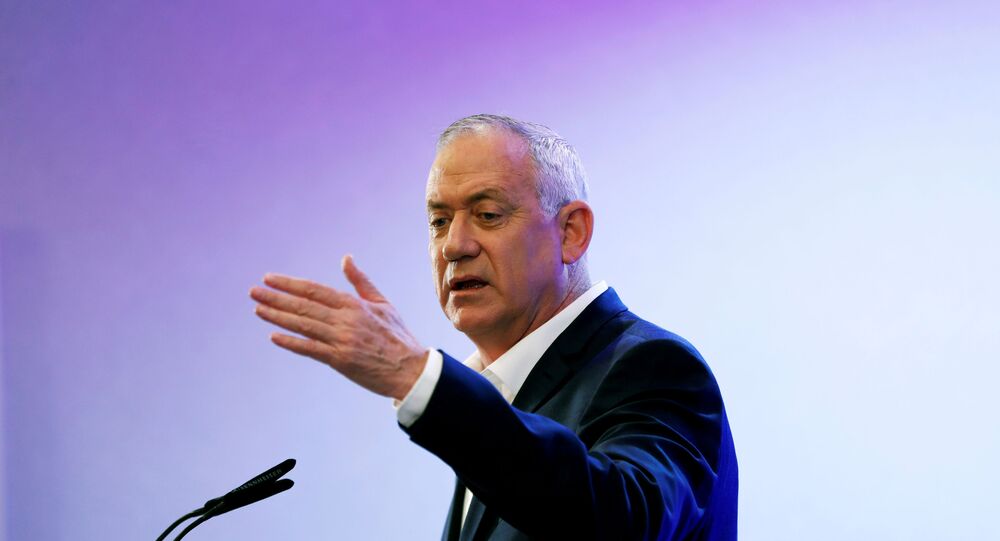 Benny Gantz has little to be proud of during his tenure as Israel's chief of staff, believe some Israeli security experts, pointing to the failures of the Second Lebanon War and Operation Protective Edge that have marred his reputation.

Israeli Defence Minister Naftali Bennett is still considering joining a coalition with Prime Minister Benjamin Netanyahu hoping to get guarantees from the PM that he will receive a prestigious post in the new government.

Even if he does, one thing is for sure: his days at the defence ministry are numbered.

The individual poised to replace him there is Benny Gantz, once a bitter rival of Netanyahu, who now has become his coalition partner. The 60-year-old, who previously served as the army's chief of staff, is set to man the position for 18 months, until September 2021. Then he is supposed to assume the job of PM, with Netanyahu serving as his deputy and the nation's defence minister.

Gantz's Past Mistakes and Marred Reputation

For some, the mere thought of Gantz heading Israel's most important office with an annual budget of more than $20 billion is problematic. In an op-ed on Ynet, one of Israel's main news websites, Tzvika Fogel, former head of southern command, writes about Gantz's inability to handle the post.

"We forgot that he was the chief of staff that wasted 51 days in Operation Protective Edge. It was during his tenure that the IDF's organisational culture started to cripple. Does anyone really think that Gantz will now suddenly become creative, proactive, and winning?"

Although during his election campaigns Gantz tried to position himself as a man of great achievements, in reality his tenure as the nation's chief of staff is associated with some failures and disappointments.

To begin with, Gantz and the establishment he headed was not ready for the war that erupted in 2014 following the kidnapping and the subsequent murder of three Israeli teens by terrorists associated with Hamas, the group that controls the Gaza Strip.

The army was unprepared given the fact that it hadn't held any military drills half a year prior to the operation that claimed the lives of 68 Israeli soldiers and more than 2,000 Palestinians.

© AP Photo / Dan Balilty
Netanyahu and Gantz Agree to Form Emergency Coalition Government
Secondly, the IDF knew about Gaza's attack tunnels but they lacked enough intelligence on their location, depth, and capabilities. Nor did they have the technological means to tackle the rising threat.

Gantz's lack of knowledge was so severe that the initial estimation was the IDF would be able to spot and destroy Hamas' tunnels within "two to three days". In reality it took Israel a month to destroy 30 tunnels but nobody knows how many are still there.

But the inability to win Israel's longest war was far from being Gantz's only failure. The former army chief was also slammed for the way he handled the northern front during Israel's Second Lebanon War in 2006.

A year prior to the eruption of the war, Gantz, who at the helm of the IDF's northern command, was supposed to track and follow Hezbollah's activity on the border. As such he was supposed to know about the Shiite group's accumulation of weapons as well as their network of tunnels, designed to attack and kidnap Israelis.

Eventually it happened. In July 2016, the Islamic group targeted an Israeli Army patrol consisting of two armoured jeeps on the Israel-Lebanon border. The ambush left three soldiers dead. Two others were wounded during the attack and were taken to Lebanese territory.

Israel waged a war on Lebanon to teach Hezbollah a lesson and to return the bodies of soldiers abducted during the 2006 attack, but when the hostilities ended, the IDF came out with low morale and failed to contain Hezbollah.

Since the end of the war the Shiite group has replenished and expanded its arsenal. Estimated to have received military and other aid worth billions of dollars from Iran, it has become one of the strongest military groups in the Middle East.

According to estimates, the organisation boasts a 50,000-strong army and possesses an arsenal of up to 150,000 rockets, more than the combined amount owned by NATO members, with the exception of the US.

Hundreds of the aforesaid missiles are believed to be long-range weapons, but they also reportedly own an array of remotely controlled aircraft, shore-to-ship, anti-tank, anti-aircraft missiles, and a network of sophisticated tunnels.

In the south, Israel's military hasn't solved its problems either, with Hamas still posing a threat to the Jewish state. Since the end of Operation Protective Edge in 2014, Gaza-based militants have launched hundreds of rockets on Israel. The year 2018 saw a peak in these incidents, registering 1,119 rockets, the highest number in a decade.

Will Gantz and the military establishment manage to overcome these and other problems they weren't able to before?

Some will answer this question with a definite no, but Gal Perl Finkel, a security expert who has published many articles on Israel's defence apparatus, thinks Gantz's appointment as defence minister will be a blessing for the Jewish state.

"Protective Edge was managed way better than the Second Lebanon War, partially due to his actions. Gantz commanded the army during a complex war that resulted in the destruction of tunnels, Hamas' headquarters, its infrastructure, and the killing of many terrorists... [therefore] Gantz can become a good defence minister, only if he scraps the idea of being a super star chief of staff", he concludes.