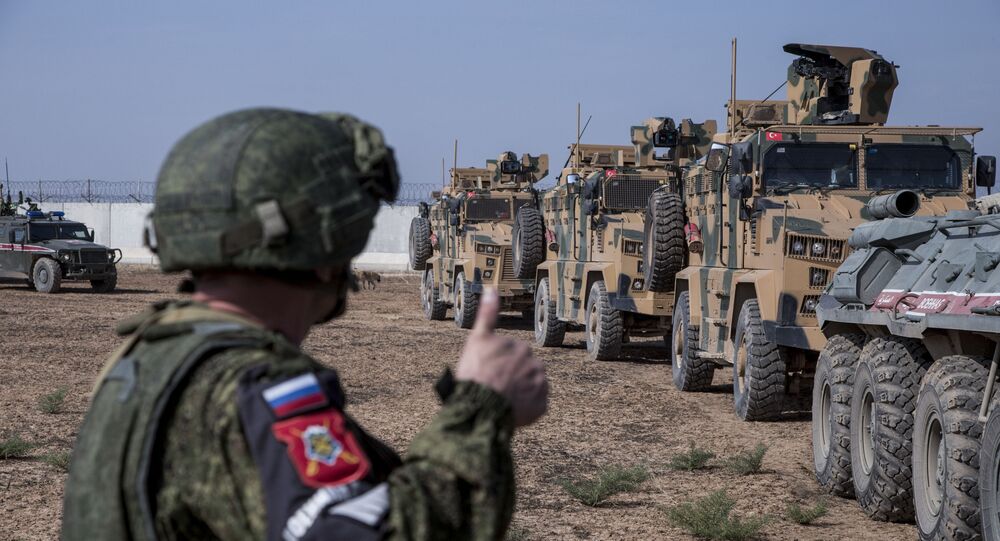 On Saturday, Turkish President Recep Tayyip Erdogan told reporters that he had asked Russian President Vladimir Putin to “get out of Turkey’s way” and to leave Ankara “face to face” with Damascus in the renegade Syrian province of Idlib.

Russia is the only country with a legitimate, internationally recognized right to station troops in Syria, presidential spokesman Dmitry Peskov has said.

“Russia is the only country which has troops in Syria on a legal basis and at the request of the legitimate Syrian government,” Peskov said, speaking to Russia 1’s Moscow.Kremlin.Putin programme on Sunday when asked to comment on President Erdogan’s remarks about what “business” Russia has in Syria.

“All other military forces of other countries are in Syria in contravention of the norms and principles of international law,” Peskov added.

According to the Kremlin spokesman, all of the actions by the Syrian military in Idlib in recent days have been aimed at fighting terrorists. Turkey, on the other hand, has failed to meet its obligations under the Sochi agreements, he said.

“We know that under the Sochi agreements from a year ago, it was the Turkish side which was required to ensure a regime of inactivity by these terrorist elements. Unfortunately, Turkey has not fulfilled these obligations, and the terrorists went on the offensive against Syria’s armed forces,” Peskov said.

Peskov recalled that in addition to attacking the Syrian Army, the terrorists were also attacking Russian military units in the Arab Republic. “Therefore,” he noted, “regardless of any statements, the fight against these terrorist elements will continue.”

Peskov also confirmed that Presidents Putin and Erdogan would meet on March 5 or 6 in Moscow to discuss the Syrian crisis. According to Peskov, the meeting would not be an easy one. “This will undoubtedly be a difficult meeting, but the heads of state have nevertheless affirmed their focus on resolving the situation in Idlib and their adherence to the Sochi accords. This is important,” he said.

Putin and Erdogan spoke by telephone on Friday. On Saturday, Erdogan told reporters in Istanbul that he asked Putin about Russia’s “business” in Syria, adding that while Turkey didn’t mind if Russia established a base in the country, it should “get out of our way and leave us face to face with the [Syrian] regime.”

Russia established an airbase in Latakia, northwestern Syria in 2015 on the request of Syria's internationally recognized government to assist the country in its fight against a broad array of foreign-backed terrorists.

Russia and Turkey reached an accord in Sochi in September 2018, allowing the Turkish military to establish observation posts in Idlib on the condition that terrorist groups be separated from other armed groups and expelled from the de-escalation zone. Russian Foreign Minister Sergei Lavrov has recently said that Ankara has failed to do so.

Tensions in Idlib escalated in February after Syrian artillery struck a Turkish observation post, killing eight Turkish troops and injuring several others. The situation has since turned into a shooting war between Syrian troops, Turkish forces and Ankara-backed militants. On Thursday, Syrian strikes killed at least 33 Turkish troops who were mixed in among jihadist militants, sparking off a Turkish response which included attacks on dozens of Syrian government targets in ‘Operation Spring Shield’. Syria initiated its Idlib operation in December, citing repeated terrorist attacks on army positions.