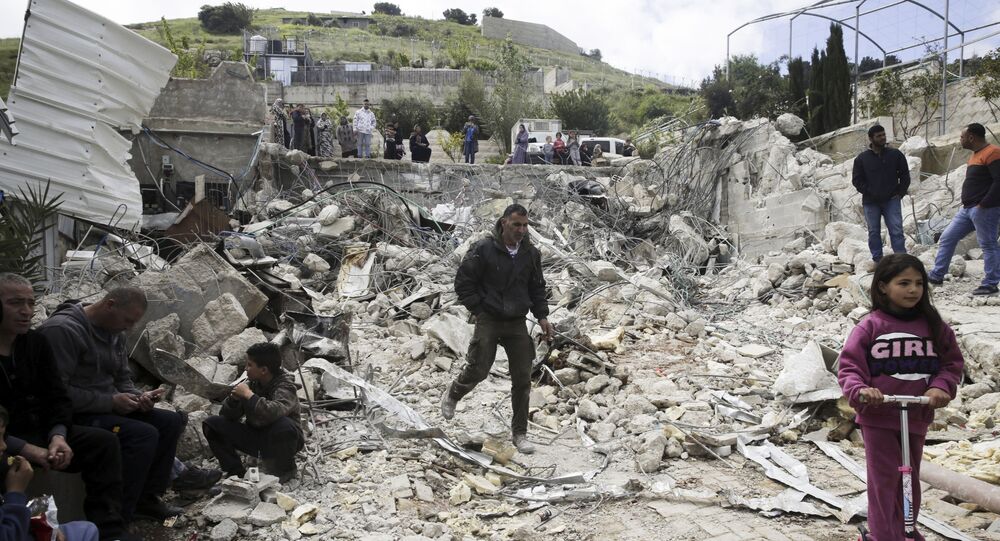 Israeli warplanes attacked several targets in the Gaza Strip after midnight on Sunday as militants close to Hamas, an Islamic group that controls the Strip, launched a rocket into Israel forcing thousands into bomb shelters in the southern city of Sderot.

The Israel Defence Forces said warplanes attacked several Hamas targets including a training camp and military infrastructure. Although no casualties were reported and no residential buildings were destroyed, for many in Gaza any airstrike is a traumatic experience, primarily because of the memories it brings.

"Warplanes destroyed my house on 1 August 2014. I don't know why it was targeted - maybe because it was located close to the [separation] fence", said Asaad, a 45-year-old from the city of Beit Hanoun in northern Gaza.

"Since then my family, comprised of us parents and our eight children are considered internally displaced persons, with no roof above our heads".

Asaad is not alone. During Israel's Operation Protective Edge in 2014 that aimed to put an end to the indiscriminate rocket fire emanating from the enclave towards the country's southern communities, the IDF destroyed hundreds of Hamas and Palestinian Islamic Jihad's military targets.

But in the process of doing so, Israel's military also caused immense destruction to the Strip's infrastructure, estimated to be around $6 billion. Reports suggest that about 18,000 residential units were destroyed or heavily damaged, leaving some 100,000 Palestinians homeless.

After the fighting concluded, international and Middle Eastern donors convened in Cairo pledging some $5.4 billion for the reconstruction of the Strip but several years later most of the money has yet to make its way to the Strip.

While western donors were tired of giving their money and seeing how their investments go up in smoke every time hostilities flared up between Israel and the Palestinians, Arab countries, primarily Egypt, Kuwait and Saudi Arabia, were weary of helping an organisation that was known for its links to the Muslim Brotherhood, an Islamic movement banned in those countries.

© REUTERS / Brendan McDermid
Iran's President Rouhani Brands Trump's Israeli-Palestinian Deal 'Crime of the Century'
Qatar and Turkey, who continue to maintain good ties with Hamas, were the only two countries that kept their promises granting the enclave $216 and $139.48 million respectively.

Over the years, Qatar has become one of the main donors of financial aid to the Palestinians, contributing more than a billion dollars since 2012.

Until recently, Washington too has been a big contributor. In fact, since 1994 with the signing of the Oslo Accords, the US has been the largest donor of aid to the Palestinians, pledging some $600 million annually in recent years.

Where is the Cash?

Yet, Asaad says he and his family have never seen the money that so many nations have granted Gaza's deprived population.

"I did receive some money from the government but that was not enough to reconstruct my five-storey house. As a result I am now renting an apartment but this money is running out too, due to the fact that the US froze its donations to UNRWA", he said referring to the United Nations relief agency that saw significant cuts to its money flow following President Trump's decision to cut off Washington's aid to the Palestinians.

Asaad holds Hamas and Fatah that controls the Palestinian Authority responsible for the mess.

"All of them are big thieves who stole our lives and money. Gaza was given lots of cash for the reconstruction. Where is it now?"

Not a Penny Was Wasted

One person who could possibly have answers to this and similar questions is Dr Mofeed Al Hasayneh, a man who served as the Minister of Public Works and Housing from 2014 to 2019.

Being an independent candidate, who didn't belong to any of the factions, Al Hasayneh was determined to use the money he received to rebuild the war-stricken enclave, and he says he managed to do so in 85 percent of the time.

Israel has claimed the money the Palestinians received was not directed at reconstruction efforts, saying it was used to boost Hamas' military capabilities, including the digging of tunnels that were utilised for the transfer of goods, weapons, and even militants. But for Al Hasayneh these allegations are little more than "nonsense".

"Every gram of cement that went into Gaza was checked by the Israeli authorities. That cement could not be used for building tunnels", he explained, conceding the material that reached the enclave from Egypt could have been used for Hamas' military purposes.

Al Hasayneh believes he and his government did everything they could to help people rebuild their lives after the destruction caused by the IDF operation. But once the unity government fell in 2013 reconstruction efforts came to an end.

"There is no cooperation between Fatah and Hamas right now and as a result, the ones who pay the price are ordinary Palestinians", he summed up.